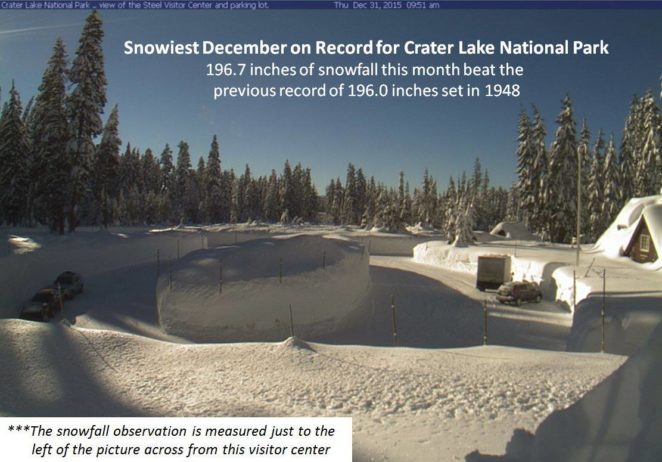 Yesterday, when I shared some pictures and memories of Crater Lake, I forgot to share one that I’d meant to. The picture wasn’t from my youth, though it was from Crater Lake and it was taken on the last day of 2015.

A lot of people don’t fully comprehend just how much snow we got every year at the park. There was snow on the ground in places for 9 months out of the year. As a kid, we had to learn to enjoy playing in the snow or spend many months inside the house. That was without the electronic gizmos kids have today and even watching TV wasn’t an option. Even if we were allowed to do so, there was only one TV station to watch, which meant soap operas for most of the day. That would have been Boring with a capital “B”.

Needless to say, we learned to like playing in the snow. There certainly was a lot of it.

This picture gives an idea of how much snow there was every December. In 2015, despite the number of people who still try to maintain that the whole world has warmed up tremendously, Crater Lake registered the greatest amount of snow ever recorded there for December; 197.7 inches. That shattered the record for December snowfall. To get a better idea of how much snow that is, it is just below 16 1/2 feet of snow. The old record was set in 1948, well before I was born, and that was a year when the surface of the lake froze over completely.

The 2015 record isn’t even cumulative. It is just December snowfall and doesn’t count the snow that fell in September, October, November, January, February, March, or April. At least twice to three times that much snow fell for the year; roughly 33-49 feet. Notice the truck parked next to the snowbank over on the right. It is a truck about the size of a moving truck and the snowbank is actually taller than the truck box.