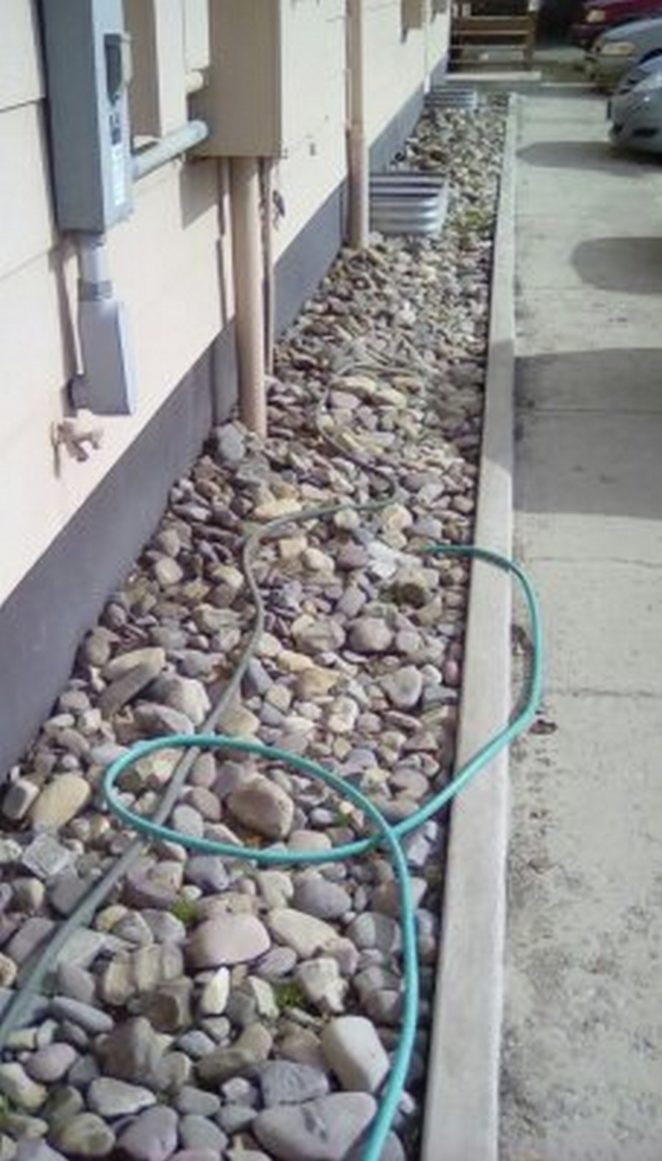 What a difference a little love and care can make. This series of pictures show just one instance of how that care and love can literally blossom.

For some background, one thing that greatly bothered me in 2015 when we began going to Church on the Move, an Assembly of God church, was the condition of the church flowerbeds. Mind you, the message that was being delivered at the church had nothing to do with flowerbeds and that certainly wasn’t the purpose of the church. As with people, what they look like and how they dress isn’t anywhere close to as important as who they are inside.

Still, it bothered me. The flowerbeds were downright ugly. They were filled with rocks, trash, debris, and weeds. In fact, they hadn’t been cared for in the 20 years since the sanctuary building was constructed. To me, it simply wasn’t appropriate for a house of God and place of worship.

I approached our pastor, Jim Sinclair, with a simple request in 2016. I asked him if he would permit me to clean up the flowerbeds. Jim wasn’t a horticulturist and before he became a pastor, he’d been a timber faller or lumberjack. However, he was well aware of how bad the flowerbeds looked. He also knew that the flowerbeds were the first thing that church visitors saw before they even entered the building. Jim happily gave me permission to work on the flowerbeds and I have no doubt at all that he had no expectations.

This series of pictures shows what happened. It should also be mentioned that the church consists of two buildings, both with flowerbeds. The old building contains the soup kitchen and at the time had meeting rooms. The new building, constructed around 1997, contains the sanctuary where services are held. It also has the offices, meeting rooms, and so forth. The flowerbeds run along the front of both buildings. Altogether, the flowerbeds are roughly 175 feet long and about three and a half feet wide.

This is a picture of the flowerbeds in front of the sanctuary building or 'new building' before anything was done. Those are river rocks that fill the flowerbeds. The only thing growing is an occasional weed and there was quite a bit of debris, from bits of paper to cigarette butts and even some broken glass. The debris doesn't show up very well in this image, but it is easy enough to see why I said that the flowerbeds were ugly. 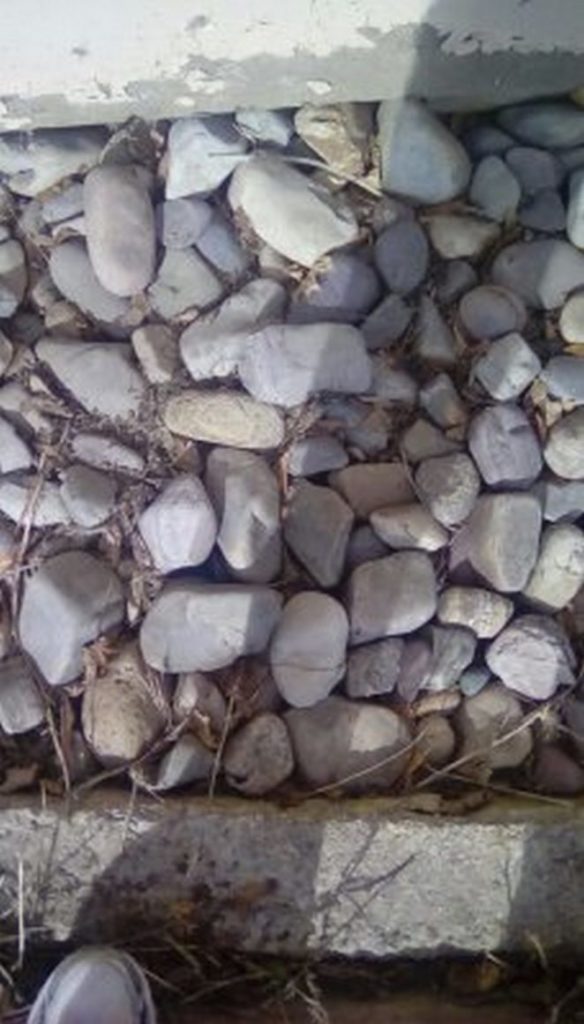 This is a closer picture of the rocks in the flowerbeds. There are actually rocks under what can be seen. The total depth of the stones is a bit more than a foot. Under that was very poor soil, nearly sterile,  that had a large amount of clay, so it was all very compacted through the years under the weight of the stones. When I took this picture, my foot was on a dead weed, which was one of the few plants in or near the flowerbeds. 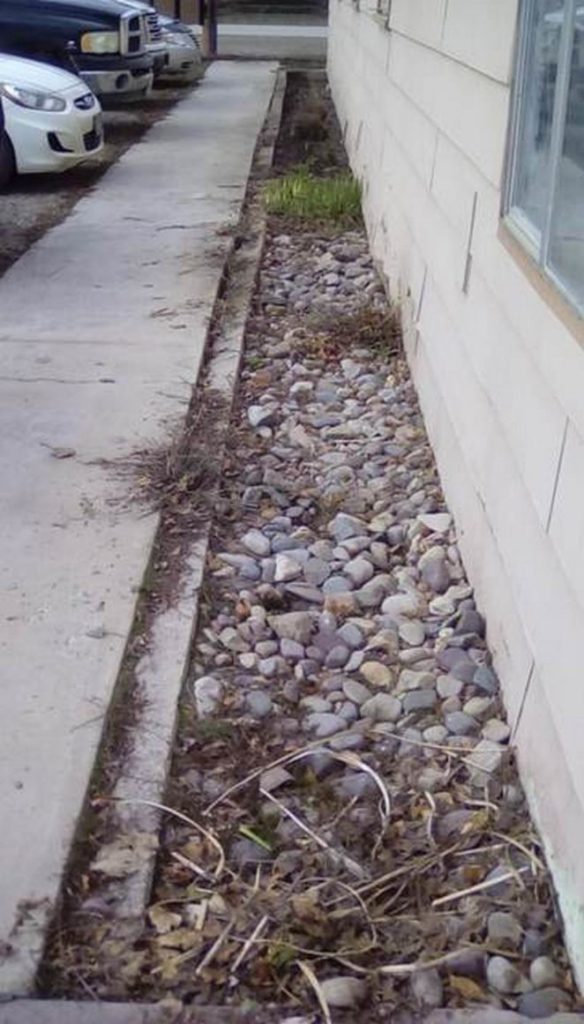 Facing west and in front of the old building, this is what the flowerbeds looked like after the dead leaves were removed, just to get to the stones. Aside from weeds and grass that can be seen amongst the rocks in this picture, the only green of plants is an overgrown clump of irises about halfway down the building. There were actually three such clumps of irises along this building and none of them had been tended in 20 years so they were stunted, with roots on top of roots on top of roots.

My first task was to remove all of the stones from in front of both buildings. This was all done by hand, using a wheelbarrow to move the rocks to the back of the building, where they were piled for later removal. All told, there were at least three or four tons of rocks that were moved.

The next step was to dig up the clumps of irises and to separate them. This was a huge task as the clay soil didn't yield up the tubers easily. Besides what I kept for replanting at the church, I ended up giving away four large boxes of iris tubers; about 70 pounds worth. 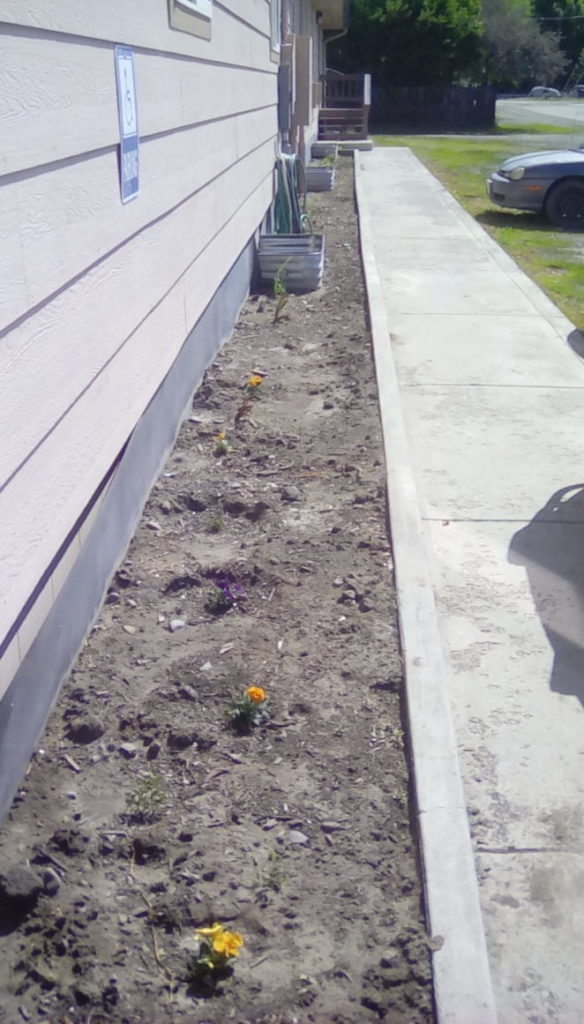 It took a little over a month of working at it daily to remove the stones, debris, and weeds from in front of both buildings. It took another two weeks to separate the iris clumps. The soil was still very poor at that point, but it was the first opportunity to plant a few flowers to make the flowerbeds look a little more like they should look.

This image is along the sanctuary building after marigolds (orange), pansies (yellow), and petunias (purple) were planted. Several daylilies were also planted and the leaves can be seen near the top of the picture. What isn't seen is that each of these plants was planted in finished compost by digging a hole, putting in some compost, putting the plants on top, filling in around the plants with compost, then covering that with the soil that was already there.

It might sound like a great deal of effort and it was, but I frequently prayed about every step, asking for guidance regarding what to do next, what to plant, how to plant, and so forth. I merely supplied the labor. God supplied everything else. 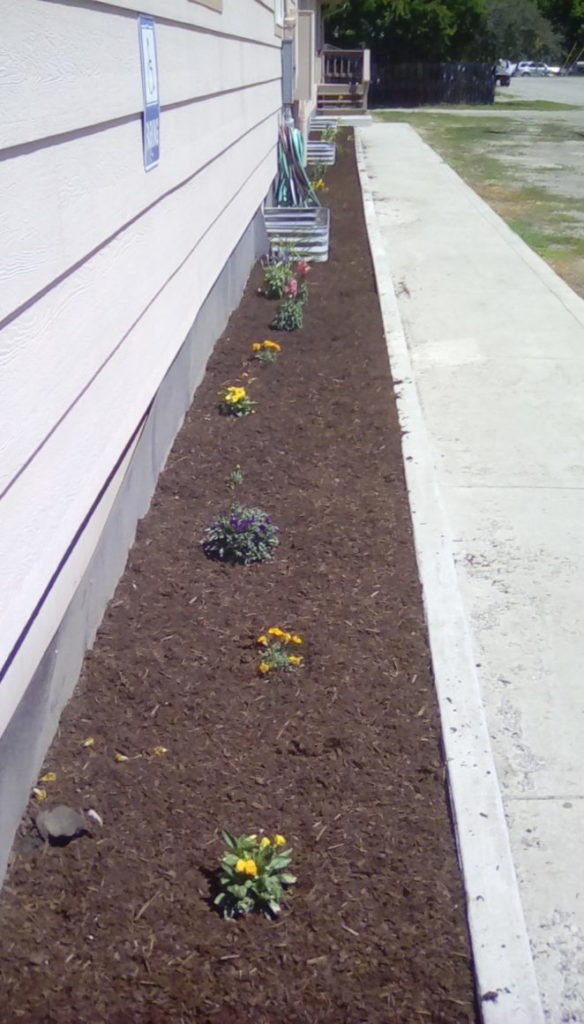 The next step was to put in about a two-inch layer of bark mulch to dress up the flowerbeds. As can be seen, the plants are beginning to get healthy and to grow. The pink flowers about in the middle of this image are snapdragons. Just beyond the snapdragons is a Russian sage plant to add yet another shade of purple. 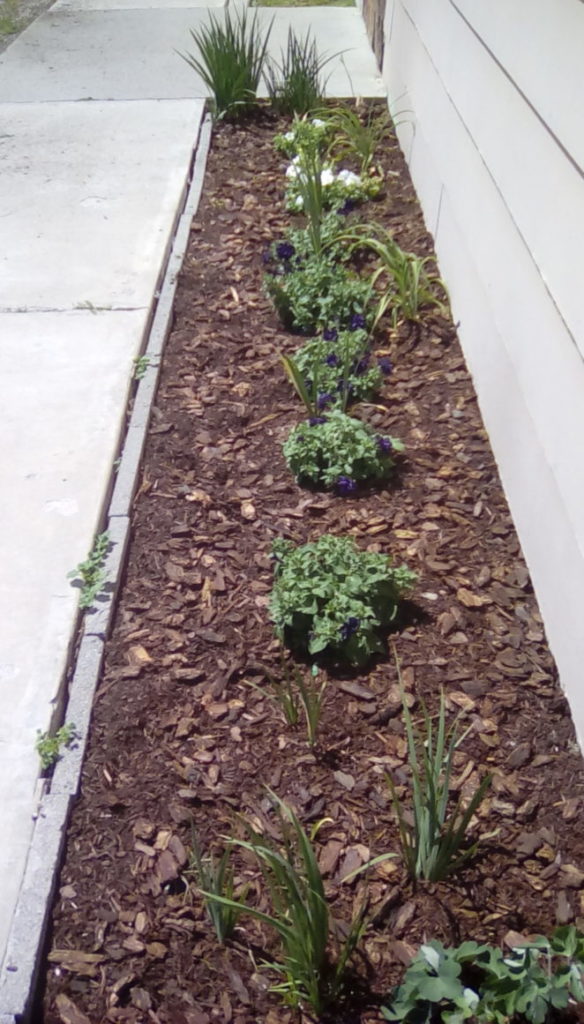 This is along the old building after the irises were separated and replanted. The plant at the bottom right of the picture is a columbine that isn't yet blooming. The bushy plants with purple and white flowers are petunias and the leaves of a couple of daylilies can also be seen.

After everything was planted in the same way that I planted along the sanctuary building, I again mulched with bark mulch. For even more dressing, I put larger pieces of bark over the top of the mulch. 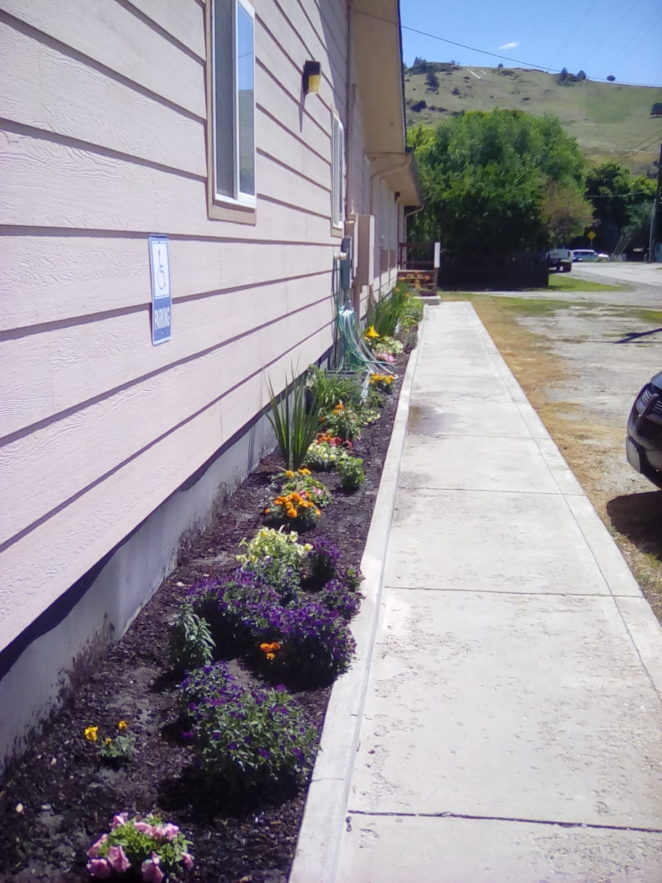 This picture is roughly one year after the first picture when I began the project. This picture was taken in June 2017, in front of the sanctuary building. By the end of the growing season, this flowerbed was almost a solid mass of plants, all of them blooming and healthy.

I've received a lot of compliments on the flowerbeds, but I acknowledge where the real expertise comes from. I just plant them. God makes them grow. A few people sort of snickered about that, until the middle of December 2017.

By that time, we'd had numerous snowfalls and temperatures had fallen to below 0 F / -18 C a few times. Yet, the snapdragons, which are not hardy perennials, were still blooming! Some of the marigolds, also an annual, were also still in bloom.

In fact, there are new leaves on the snapdragons right now, in 2018. That is really something for an annual plant that kept growing all winter long and still shows no sign of stopping. It definitely isn't due to any special talent that I have. 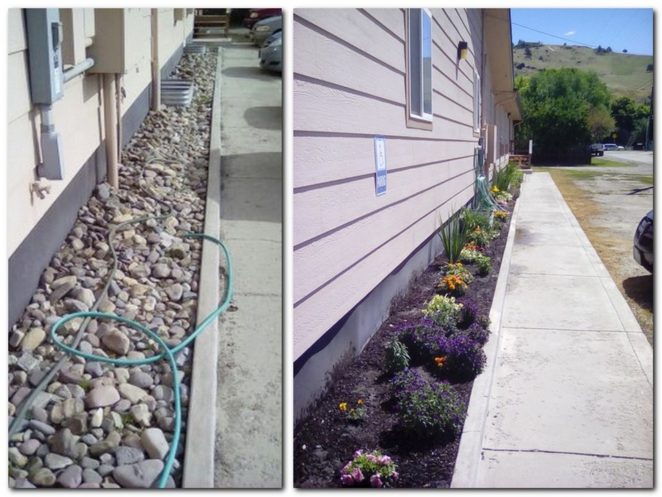 The easiest way to see the difference after a year's worth of the labor of love is to compare what it was with what it became. I fully plan on continuing with the labor of love this year. In fact, the flowerbeds have been cleaned out, daffodils are in bloom, tulips, Russian sage, daylilies, irises, chives, bellflowers, and hyacinth is coming up, and I have new flowerbeds to work on this year, too.

The effort is so worth it and the flowerbeds no longer look ugly. I find it exceptionally appropriate, as well, in another way.

A person who is without love is like the picture on the left. They aren't fruitful. Instead, their lives are filled with rocks and debris. Their lives are a veritable wasteland with nothing growing. They don't live, they merely exist.

However, if they allow love in and begin to show others that love whenever there is an opportunity, the flowerbed of their soul becomes like the picture on the right; full of life, vibrant, growing, and fertile. Every one of us must choose which flowerbed our lives will be. It takes some effort to have a flourishing and beauty-filled life, but isn't the effort worth it? 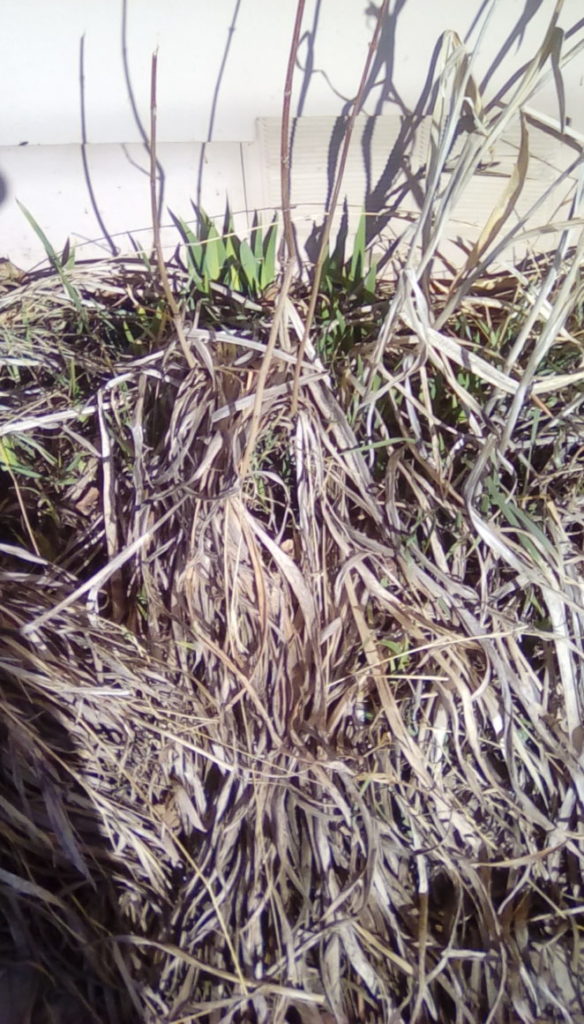 This is a closeup of one of the iris clumps. A few stunted iris leaves can be seen next to the building but there are so many dead leaves that it is hard to see that under all of this, there were more irises struggling to make it up through the tangle. Each of these clumps measured about four feet by three and a half feet by two and a half feet deep. It was all an interconnected mesh of roots.