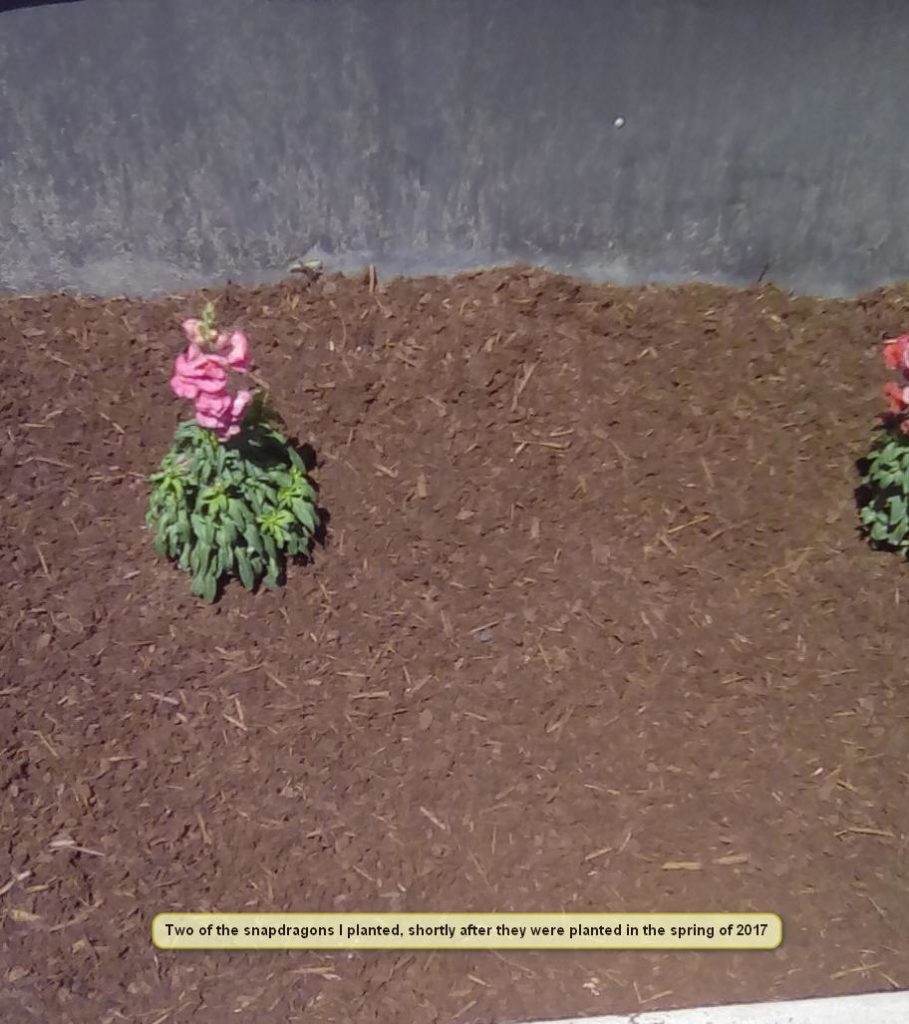 Kim’s challenge for June, write about Happiness. What makes you happy?

I’m happiest and get the greatest amount of happiness when I do anything at all that glorifies God and that can make Him happy. That requires a bit of explanation, to clarify what I mean.

There are many things that make God happy, according to the bible. Among the greatest is humble service to others. One of the ways that I do humble service is to tend the grounds at Church On The Move, the local Assembly of God church.

In other words, I mow, weedeat, plant flowers, water, tend to the plants, and otherwise maintain the church grounds. When I started doing it, the reason was that the grounds were frankly an eyesore. The only things that were growing well were weeds. While I appreciate many of the weeds since they are edible or medicinal, they sure aren’t bringing glory to God when they are growing outside a place of worship. People see in and say, “Ewww!”

My professional training has been as a computer technical engineer and as a restaurant manager, not as a horticulturist. I have a lot of interests and horticulture is one of them, but I’ve never had formal training in botany. Just because I know a great deal about a topic doesn’t make me an expert.

Today, there are actually flowers and plants growing around the church. Each time someone tells me that the flowers or grounds look beautiful, I take it as a glory to God. In turn, that gives me happiness. I’ve even had people who have never been to our church commenting on how beautiful the flowerbeds look and I’ve also had people asking me for growing advice because of the church grounds.

Mind you, I’m a gardener and I love to garden. I’m not devoid of gardening knowledge. I’ve actually studied gardening for over 50 years. I’ve shown people who didn’t think they could grow something, how they can. I’ve grown things that people said wouldn’t grow in my area. Despite this, it is God who makes things grow, so everything I grow is for His glory, not mine.

Atheists might scoff at that. However, I planted snapdragons at the church last spring. Snapdragons are annuals. They aren’t cold-hardy. Yet, not only did the snapdragons flourish last year, they were still blooming a week before Christmas even though we’d had several snowstorms and also temperatures that dropped below zero F. Those same snapdragons came back this year and are now blooming. This defies the meaning of “annual” and it isn’t something I could accomplish if I relied on myself to do it. The flower beds are exposed and the soil is poor, yet they continue to produce, defying botany laws and rules. I simply cannot believe that it is mere chance that this has happened, especially considering that other snapdragons planted in the area (including by me) haven’t done the same thing. They died last fall.

Anyway, I’m getting off on a tangent. Through my work on the flower beds, I’m able to glorify God. That seriously and honestly makes me happy. I’m also thankful for being able to and allowed to serve in this and other ways.