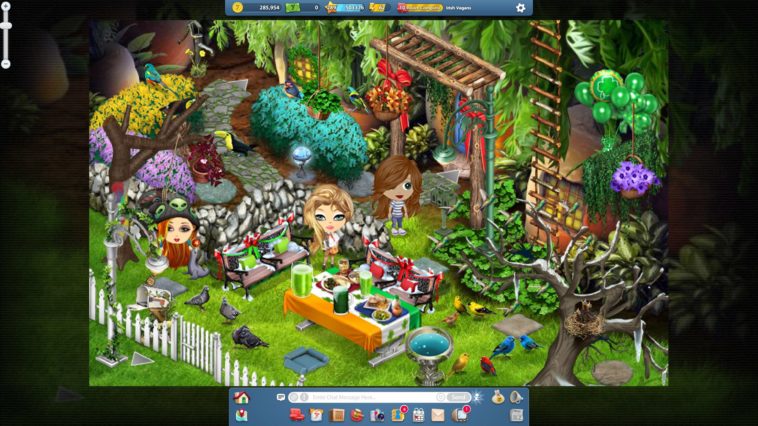 While in Yoworld, I decided to post screenshots of my cottage renovation project because I really thought it would be cozy and cute idea for a real house. This theme started during March for the St. Patrick’s Day theme, which is why there are lots of St. Patrick’s Day green props throughout the house and yards. Since I didn’t have enough yocash to buy a cottage, I decided to make my own cottage by renovating old Yoworld coins homes. I chose the carrot house, which was actually an Easter-themed home from previous years because I liked the basic layout of the house and yards. It had the potential to be remodeled into a cute and cozy cottage. But this cottage is located amidst the green pastures of Ireland.

This screenshot is the front yard, where my avatar is swinging on a tire swing, which was a gift from another Yoworld resident. She has the fashionable tiger-eye hair color, which was another gift from another Yoworld resident. She is wearing an alien slouchy hat, from one of the previous themes. The three tenants actually live in this cottage, although two of them are standing in the front yard. The third tenant is in the backyard. There is a treehouse-like ladder that leads to a cute nook balcony. Lots of birds hang out in the front, which looks similar to my real townhouse. I added cute benches and a picnic table for front yard meals amidst greenery and nature. Although avatars can go straight to the backyard from the left side pathway, my avatar will now enter the house via the front door.

This screenshot is of the living room, and I decorated it like a loft, but cozy. I divided the big living room into three sections for different people and animals to hang out together, each group doing their own thing without getting in each other’s way. One section has a table for people who want to eat, drink coffee, and blog on her laptop. It is by the fireplace, which is relaxing during cool months. Another section is just as comfortable, but it is for watching TV and chatting, next to a candlelight fireplace. The third section is for lounging and cuddling with pets. I placed some pretty pillows on the floor, along with a rocking chair, and a heart-shaped ottoman. It is also a good place to play games, cards, and hang out.

This screenshot is the kitchen. I like it because it was very roomy, but I still wanted to enlarge it by creating a second floor for storage. You will see why later, but they need this storage place. I kept the color scheme in mostly greens, with a little yellow and orange as well as some blue, to create warmth and earthiness. There are three different tables for different people to eat or drink in privacy because this cottage is for three female roommates.

This screenshot is the bedroom, which is for three female residents. They are roommates, and they each need their own personal space, divided by large and high furniture to give each girl her own privacy. One is into animal prints, one is into plaid, and one is into reds and pinks. But I think everything in the room still works together to look like a cute dorm room.

The bathroom is large and roomy, which is perfect for three women, especially if they need to use it at the same time, but each doing different tasks. There is a bathtub/Jacuzzi, shower, relaxing candlelight for meditative purposes, the toilet and the other cleansing one. I also added a laundry room in the bathroom, which I think looks pretty because it looks like they are bathing and doing their laundry amidst nature.

The last screenshot is the backyard, in which I turned into an animal sanctuary haven for these cute animals, such as farm animals, wildlife, reindeer, camel, deer, donkeys, and horse. They all live here together in peace and harmony like one big happy family. The third tenant is cleaning the cow, not milking it because they are all vegans. I added another treehouse-like ladder for a backyard balcony.