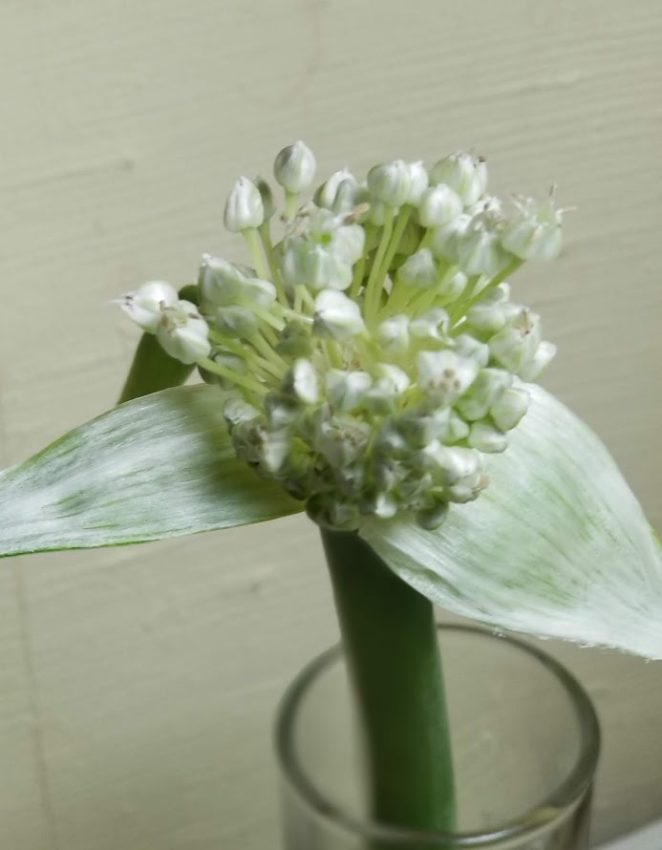 Six days after I noticed that the leek scape in my post called “You Can’t Eat the Flower and Have It Too” showed its first little bulge, it started looking round and firm, like it was ready to pop out.   However,  its outer covering had turned brown and dead-looking.  So I got out my pointy little titanium scissors and gently cut away at the top

Inside was a bumpy protuberance that vaguely resembled a morel mushroom, only green. Not sure why, but I blew on it and to my surprise one of the bumps jumped out at me and opened into a tiny bell-shaped white flower. So I pulled the withered material back and one by one the little flowers began to shoot out and open up. In minutes the globe had quadrupled in size. The next day, after about 2/3 of the little blossoms had fully opened, 5 or 6 diminutive brown seeds could be observed dancing in rings around the tops of the open flowers.

But the 3rd question, and I did not cheat and look up the answer because if it didn’t open up I didn’t want to face the disappointment, was:  Can you eat the flower once it has opened (or more properly, would you want to!?)  Yes, and YES!

I took a picture to show you guys first, and then cut off a few tiny blossoms to taste.  They were quite good. Google says “all” allium flowers are edible, and that these are very good sprinkled over pasta alfredo.  Mmm, with pecorino and black pepper. However, they should qualify that statement by noting tat all of the different kinds of allium used as vegetables are edible, because, apparently, all parts of the ornamental alliums are said to be somewhat toxic to humans, and highly toxic to cats and dogs. There also are some deadly plants that are not alliums, but might be mistaken for them in the wild.

Have you ever eaten an onion, garlic, or leek flower? Would you?