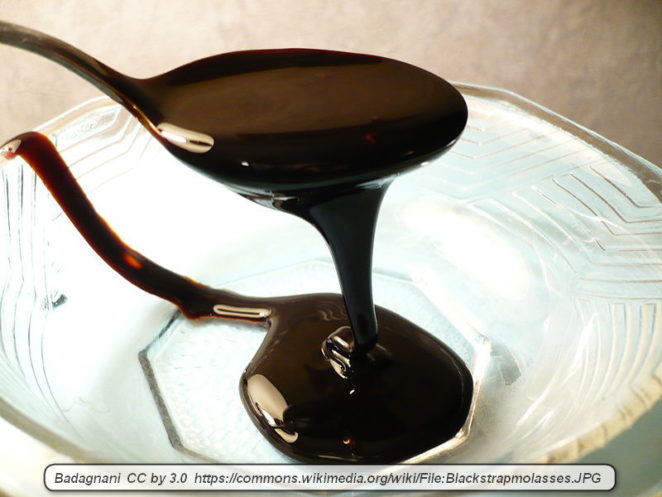 Light molasses, dark molasses, and blackstrap molasses are all kinds of molasses, but they aren’t all the same. The difference is easy to understand, though.

Molasses, also known as black treacle, is a byproduct of the production of sugar. Most often, it is made out of sugar cane or sugar beets, but it can also be made out of other plants that have a very high sugar content, such as sorghum, pomegranates, or dates.

With sugar cane processing, the cane is crushed to extract the sugar-rich juices. The juice is then boiled to thicken it. As it cools, sugar crystallizes and is removed.

These people make their own molasses:

The thick liquid that remains after the first boiling is light molasses. In some places, such as in the southern US, this is often referred to as cane syrup. Depending on the specifics of the processing, it can be extremely high in sugar content; up to 50% or so.

What light molasses isn’t sold is boiled a second time and more of the sugar that crystallizes after it cools is removed. The resultant liquid, which is thicker than light molasses, is dark in color. This is dark molasses.

Dark molasses is a little bitter. It is lower in sugar content than light molasses since more of the sucrose sugar has been removed, but it is still noticeably sweet.

Dark molasses can then be boiled a third time and yet more sucrose crystallizes and is removed. The liquid that is left is quite thick and very dark in color. This is blackstrap molasses.

Blackstrap molasses is considerably more bitter than light or dark molasses and although most of the sucrose has been removed, it still has some sweetness. It also has more of a molasses flavor. Blackstrap molasses is quite healthy, though, because it has a high content of vitamin B6, iron, calcium, magnesium, manganese, and potassium.

Incidentally, the name “blackstrap” has only been in use since about the 1870’s. It is a name that stuck, which is appropriate when talking about molasses (which is quite sticky).

Molasses made from sugar beets

When sugar beets are used, the process is much the same as with sugar cane, but only the third boiling produces molasses. Molasses that is made from sugar beets tends to be sweeter than cane molasses, but it doesn’t smell very good. Some people would go so far as to say that it stinks. However, it is edible and is valuable when fed to livestock, who apparently don’t mind the aroma. (Blackstrap molasses is also often fed to livestock, mostly horses and cattle, because of the heath benefits.)

The distinction here is from an old practice of using sulfur dioxide on the molasses to kill bacteria and molds. Sulfur imparts a foul flavor to the molasses and most companies no longer use this method, thankfully. Molasses is tremendously stable, even without treatment, so there is really no need to use sulfur dioxide.

Incidentally, and only slightly off topic, the stability of molasses can be used to an advantage for getting rid of sweet-loving ants. Simply mix some baker’s yeast with molasses and put it where the ants can get to it, but where pets can’t. The yeast works very slowly with the sugars remaining in the molasses in a very slow fermentation process. Ants eat the molasses, since it is sweet, and take some back to the queen. Although it is a slow fermentation, it is still a fermentation, which produces carbon dioxide gas. Ants don’t have the ability to burp, so the CO2 kills them. Once the queen is dead, the colony dies out.

Regardless of this, molasses is far healthier than granulated sugar and it gives excellent flavor to foods, particularly baked foods like cookies and cake. It is a vital ingredient for making brown sugar, too. I personally use it in a number of tomato-based sauces, such as spaghetti sauce and chili sauce, as a “secret ingredient”. Of course, it is no longer a secret now that I admitted it.