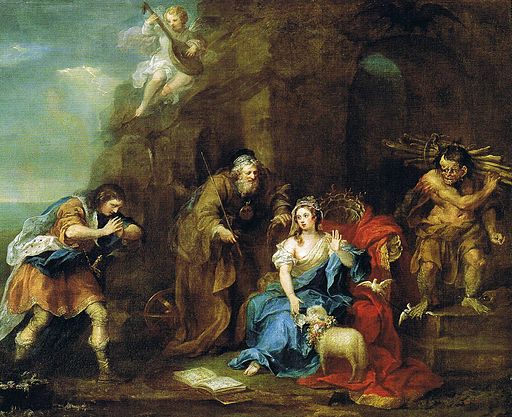 “Mr Prospero”, he said, “you have pleaded guilty to the charge of fraud, but perhaps you might like to give the court the full story of what happened so that I can decide on an appropriate sentence?”

“I am grateful to the court”, Prospero replied. “I shall therefore endeavour to do precisely that”.

“As you may recall, at the end of Act Five of The Tempest I abandoned my magic island and headed back home. But I soon got bored and wondered what I could do to pass the time and earn a bob or two while I was at it.

“Ferdinand and Miranda were very happy together and were soon producing a regular supply of grandchildren for me. This got me wondering whether I couldn’t use the island to give other young people the same opportunities. Suppose I set up some kind of community on the island where people could arrive as singles and leave as pairs? I even thought up a highly original name that I could give my new enterprise – can you guess what it was?”

“Actually,” said the judge, “I rather think I can. It wouldn’t be ‘Love Island’ by any chance, would it?”

Prospero looked distinctly disappointed at the news that his originality was maybe not as original as he had imagined.

“No matter”, he continued. “So I went back to the island and got some of my fellow characters to help get things started. I’ve always envied Hamlet his Elsinore Castle, with all its romantic turrets and spires, so I asked him to draw up plans for a hotel along the same lines. Unfortunately, this led to some delays.”

“So I can imagine”, said the judge, “it must have taken him for ever to decide how many towers to build.”

“It was worse than that,” said Prospero. “When writing the spec he discovered that he didn’t know to spell ‘abutment’ or ‘embrasure’. He went around for days muttering ‘two bs or not two bs’ to himself.”

“But the building did get underway eventually, presumably?” askedthe judge.

“Oh yes”, said Prospero, “although I should never have invited Henry V to the island. Every time a length of wall got built he insisted in knocking a dirty great breach in it and making a stirring speech as he did so. I had to send him home.

“Worse problems arose after everything was ready and my guests had arrived, having already paid substantial deposits for their accommodation. You see, I thought I could raise some extra cash by running a casino in the hotel. I got Shylock to organize the financing of the enterprise, including issuing loans for those who needed them. Unfortunately, his repayment terms were ever so slightly excessive and I lost a number of guests who preferred to leave the island with all their body parts in the same place and condition as they had been when they arrived.

“Some of the guests preferred to drown their sorrows in the bar, but that wasn’t always possible because I had made the mistake of asking Sir John Falstaff to be my barman. It often happened that he had drunk the bar dry long before opening time, leaving none for the guests.”

“What about your catering arrangements?” asked the judge. “Surely you were able to offer your guests an appealing cuisine?”

“Well, I thought I would”, said Prospero, “which is why I was delighted when Macbeth said that he knew three very talented cooks from his neck of the woods who would be able to produce some highly original dishes based on the flora and fauna of the island. I thought he meant things like pineapples, rabbits and deer, but they had very different ideas. Not too many guests went for the armadillo on toast option at breakfast, but it might have been the iguana surprise that was the final straw.

“Having said that, I think the outbreak of food poisoning was more likely to have been caused by the personal hygiene of the ladies in question, or rather the complete lack of it.”

“But did you have any satisfied customers?” asked the judge. “Did you achieve your aim of pairing people up and sending them home happy?”

“Yes to the first aim, but probably no to the second”, said Prospero. “I just don’t think that there was much prospect of lasting happiness between Romeo and Lady Macbeth, or Desdemona and King Lear, but that was who they ended up with.”

“After which, presumably, everybody demanded their money back and your inability to satisfy them has landed you in trouble with this court”, said the judge. “What do you think was your biggest mistake in all this?”

“Well”, said Prospero, “You have to remember that I used to be a magician who ruled a magic island. At the end of the play I gave up all my magic and swore never to use it again. Not only did I lose my powers but so did the island. The guests of my Love Island may have expected to come away with a few love bites, but they got thousands of insect bites instead. It used to be an isle full of noises, now it’s full of mozzies.”

“And that reminds me of what would be the most suitable punishment for you”, said the judge. “You will return to the island where your only companions will be the mosquitos and the three lovely ladies that Macbeth recommended as your cooks. They will be under instruction not only to provide all your meals but to ensure that you watch every minute of this box set of DVDs that will be your only entertainment.”

“What is it?” asked Prospero.

“Can’t you guess?” said the judge. “It’s every episode ever made of Love Island. That should be punishment enough for anyone.”