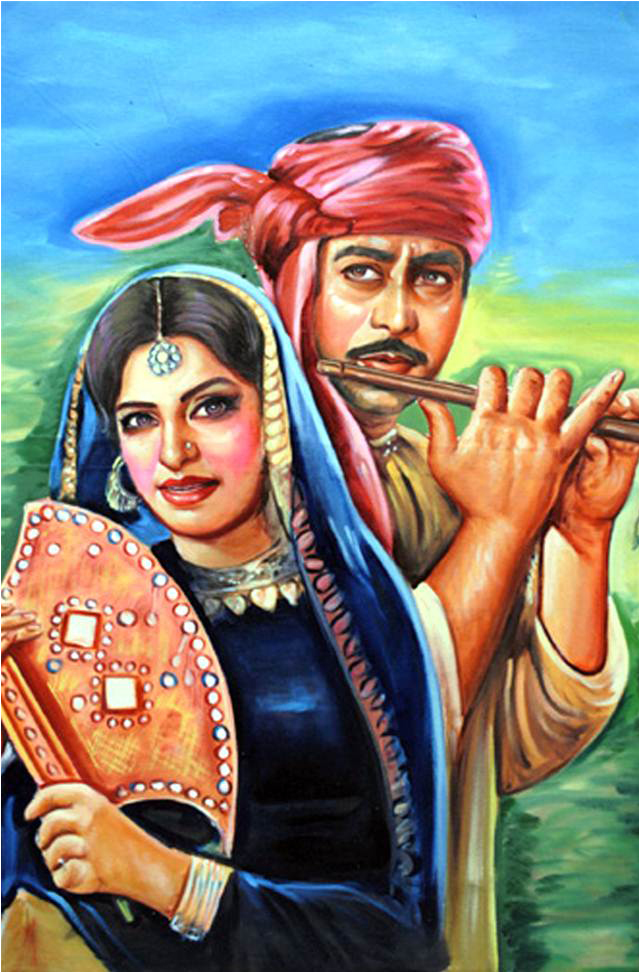 Heer Ranjha is a popular love story from Punjab which has been the subject of various poetic narrations, the most popular of them being ‘Heer’ by Waris Shah.

According to the folklore, Heer was a very beautiful Rajput woman from Sial tribe in Jhang. Ranjha was the youngest of four brothers and lived in Takht Hazara village near river Chenab. Instead of toiling in the fields, he lived life with ease playing his flute. After a dispute with his brothers, he left his village and came to Heer’s village and falls in love with her. Heer’s father gave him the job of herding his cattle. Heer was mesmerized with the way Ranjha played his flute and fell in love with him. When her jealous uncle came to know of the affair, he informed Heer’s parents who forcibly married her off to Saida Khera.

The heartbroken Ranjha wandered the countryside and met an ascetic. After meeting Gorakhnath (a renowned ascetic), Ranjha became a jogi (ascetic) and renounced the world. He wandered all over Punjab singing glories of the Lord and eventually found Heer’s new home. The two returned to Heer’s parents who finally agreed to their marriage. But on the wedding day, Heer’s uncle poisoned her food. By the time, Ranjha reached Heer, she had died of the poisoned sweet. Heartbroken Ranjha ate the remaining sweet and died by her side. They both are buried in Heer’s village Jhang and their mausoleum is often visited by couples in love.