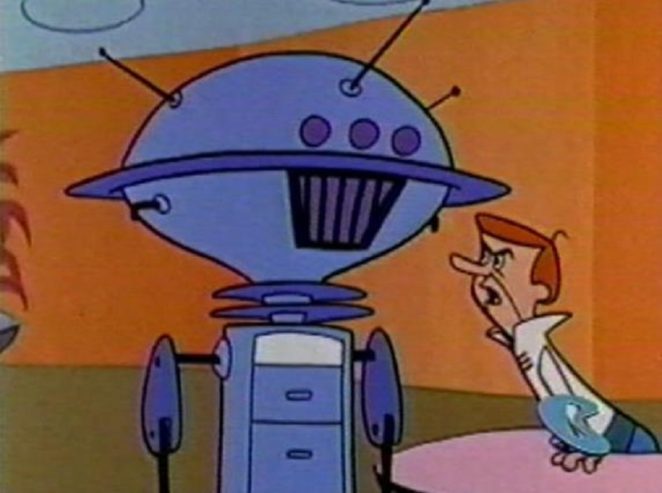 One of my favorite characters on the “Jetsons” cartoon was the robot that George Jetson called “That revolting robot” Uniblab.

Uniblab the robot guest starred in two “Jetsons” cartoon episodes. They were “Uniblab” and “G I Jetson”. The episode that I really tickled my funny bone was the episode named “G I Jetson” when George Jetson and his landlord Henry Orbit were drafted into the military when the two fellows were amazed to see Cosmo Spacely as his commanding officer at a boot camp in outer space.

Guess who was their drill sergeant. Yes it was that loveable robot Uniblab who made the life of the soldiers in boot camp miserable with his tough an nails approach to getting the soldiers into shape.

After both Jetson and Orbit were assigned guard duty, the two guys hatched a plot to get even with Uniblab by changing the batteries from A C to D C so when General McMissile was going to pin a medal on Sergeant Uniblab for doing a great job of getting the soldiers in the space boot camp into shape, Uniblab exploded when the medal touched his robotic body.

To put it mildly, General McMissile who at this point was extremely angry ordered an investigation of what happened at the medal ceremony when Uniblab exploded.

What happened after the investigation was over, Jetson and Orbit were punished by having to run on a treadmill as well as Major Spacely who at this time was demoted from an officer to a sergeant vowing revenge on Jetson when they went back to work at Spacely Sprockets when their boot camp session was finished.

It is a shame that science fiction shows today have not created a clone of Uniblab to wreck havoc on us humanoids so we can laugh at shows where being funny without using swear words or bathroom jokes was the norm of the day.

Think about this for a fact, if fast food workers are replaced by robots at your fast food favorite store and the angry customer picks a fight with Uniblab for messing up a food order, I would root for the robot to win against an angry customer since for me it would be sweet revenge for the many times that a customer has either thrown food at the person behind the counter for a honest error.