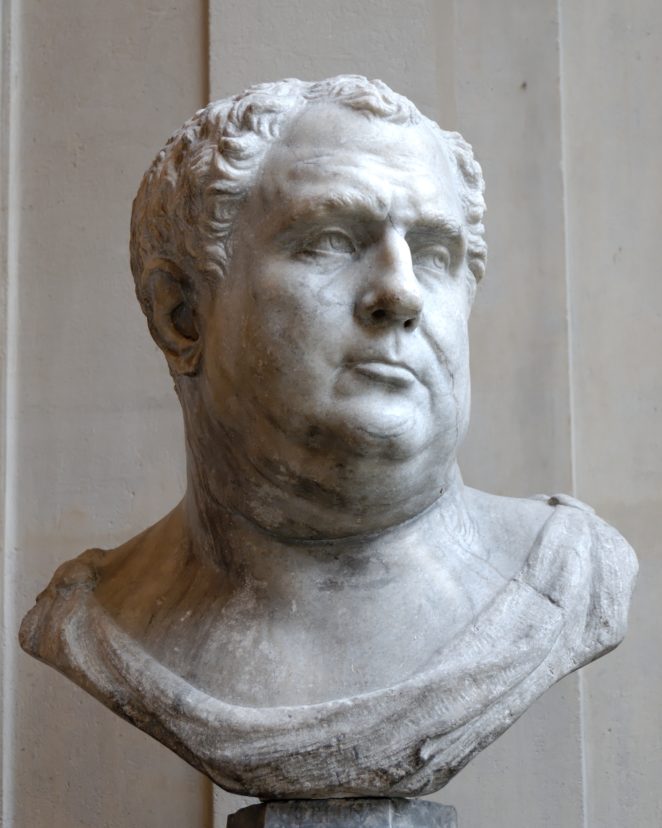 Aulus Vitellius (who later added Germanicus to his name) was the third of four emperors of Rome who held office during the year 69 AD, a year of civil war that marked a period of uncertainty between the tyranny of Nero and the stability of Vespasian.

His early life and rise to power

He was born on 24th September 15 AD, the son of a former consul and governor of Syria who had gained promotion (and kept his head) by being able to flatter firstly Caligula and then Claudius.

Vitellius was well educated, but had no particular talents that would ensure his rise to high office. However, his father’s status gave him a position at court, and his questionable morals and enjoyment of luxury had made him a favourite of every emperor from Tiberius to Nero, serving as consul (under Claudius) for the first six months of 48 AD.

It was therefore something of a surprise when Galba, Nero’s successor, chose him to take charge of the legions in Lower Germany, seeing that he had no military experience or expertise. Perhaps it was a move to get this thoroughly unpleasant man far away from Rome as soon as possible.

Galba quickly made himself unpopular with the army in a number of regions, much of this coming from a feeling of jealousy on the part of those soldiers who suffered all the hardships of camp life in distant provinces towards the pampered members of the Praetorian Guard who were now being shown favour in Rome. Vitellius could hardly be said to be suffering many privations in his own private life, but was happy to exploit the anti-Galba sentiment that was running through the army.

The German legions consequently refused to take the oath of allegiance to Galba and were keen to find a nominee of their own. When they heard that Galba had been assassinated (by troops loyal to Otho), the legions in both Upper and Lower Germany declared their support for Vitellius (on 2nd January 69 AD), who now therefore found himself in competition with Otho for the imperial throne.

Otho was declared emperor on 15th January, and immediately set out northwards from Rome to meet the legions from Germany, led by Vitellius’s generals, Fabius Valens and Aulus Caecina. Otho was defeated at the first battle of Bedriacum (in northern Italy) and, although he could probably have carried on the fight, took his own life on 16th April.

Vitellius was therefore free to march into Rome and take the throne, which he did in July, having received oaths of allegiance from the defeated troops.

His short reign as emperor

Once established as emperor, Vitellius at first showed signs of being able to provide stability for the empire. Nobody’s property was confiscated and, although some former adherents of Otho lost their lives, their estates were allowed to pass to their next of kin. However, this moderation did not extend to his personal life, given that the consumption of vast quantities of food appeared to be what interested him above all else.

Now that he was back from his “exile” in Germany, Vitellius was determined to resume the lifestyle that he had enjoyed as a young man in the fleshpots of Rome, and huge sums of public money were spent on his feasts. Vitellius had never exactly been slim, but now his waistline continued to expand to obese proportions.

In the east of the empire, Vespasian, one of Rome’s most successful generals, had at first taken the oath of allegiance to Vitellius but then changed his mind. He was declared to be emperor by the troops at Alexandria(Egypt) on 1st July, followed by similar acclamations throughout the region.

Antonius Primus, the general in charge of the legions in Illyricum (on the eastern side of the Adriatic) led an army into northern Italy in support of Vespasian, and was met by an army nominally under the command of Caecina, one of the victorious generals at the first battle of Bedriacum, who had now been appointed as consul under Vitellius.

Caecina was himself an interesting character, as he had only joined the cause of Vitellius because he had fallen out of favour with Galba, the reason being that he had been caught embezzling public funds. He now changed sides again, presumably because he could see which way things were going, and tried to turn his army to the cause of Vespasian, being arrested by his own troops as a result, so that the ensuing battle was fought with no overall commander in charge on Vitellius’s side. Caecina later served under Vespasian but yet again proved to be traitorous, after which he was put to death.

The second battle of Bedriacum on 24-25 October was won decisively by Primus, who then marched on Rome with the aim of holding the city until Vespasian arrived. Vitellius was arrested in his palace on 22nd December and dragged out into the streets, where he was reviled by the populace and then killed. His head was cut off and paraded round the city, while his body was thrown into the Tiber, later to be recovered and buried by his wife.

Vitellius had been emperor for only eight months, during which he had directed other generals to fight on his behalf and been happy to enjoy the trappings of power without assuming its responsibilities. His demise, and the accession of a strong replacement in Vespasian, was doubtless a very good thing for Rome, especially as it brought to an end one of the most turbulent and chaotic years in the empire’s history.