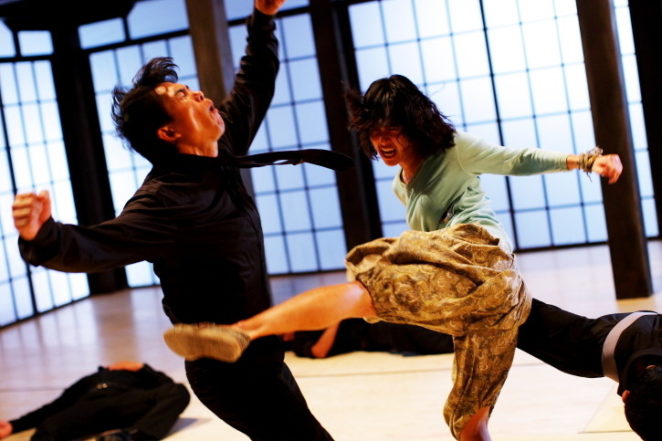 So, anyone up for a badass autistic martial arts Thai babe kicking serious butt movie? Well Yanin “Jeeja” Vismistananda is that 16-year-old pocket cinematic dynamo and sensational here. I must confess I have not seen many autistic Kung Fu heroes but we have one here, Jeeja not a trained martial artist but a dancer and athlete by sport but talented spotted by Thailand director Prachya Pinkaew and trained up and cast for Chocolate. She is not autistic off screen, of course, and the presentation of the illness on screen hardly realistic but a fun idea all the same. The Kung Fu genre is not known for originality as it has to keep it simple for it’s likewise audience.

It did good money in Thailand, 150 million baht ($5 million US) one of their best selling movies for a while. I like my Asian Extreme and more and more countries are getting good at it, the Thais joining South Korea as the new talent in town.

Zin (Ammara Siripong) is now the Thai lover of Yakuza boss Masashi (Hiroshi Abe). Zin was previously the girlfriend of Thai gangster No. 8 (Pong pat Wachirabunjong), who was extremely jealous of her relationship with the Jap.

After Zin chooses Masashi, No.8 stops his rickshaw in the street and takes a potshot at Masashi and his men, missing him before Zin stands in front of her lover to protect him, No 8 shooting his own toe as a symbolic gesture and forbids Zin from ever seeing him again. Masashi has to go back to Japan, as they would not be safe together. He begrudgingly leaves.

Soon after, Zin finds herself pregnant with Masashi’s child and moves into a new apartment to get away from No. 8. She has a daughter named Zen who is soon diagnosed as autistic. As Zen gets older, Zin has to update Masashi about his daughter’s life and condition, angering No. 8 when he finds out, this time Zin getting a body part hacked off, her toe, again forbidden any contact.

Zin is forced to move again to a house shared by a Muay Thai kickboxing school. Zen(Yanin “Jeeja” Vismistananda), growing up fast, becomes obsessed with martial arts and learns all the moves from TV, like Bruce Lee films.

Things take a turn for the worse when Zin falls ill with cancer and does not have money to pay for treatments. Zen and cousin Moom (Taphon Phopwandee) plan to make the money by having people throw balls at Zen as a street performance act as she has amazing reflexes but it’s nowhere enough. But Moom finds a list of debtors in an old notebook from the days when Zin was a high-interest moneylender under No. 8. and the two kids conduct a plan to collect on the debts. The first attempt to collect the money turns violent, and Zen uses her surprisingly effective copied martial arts skills to fight back and kick some ass. This leads to further confrontations with various criminal gangs and, eventually, No. 8.

If you want a thrilling, action packed tongue-in-cheek martial arts movie then this is it. Yanin “Jeeja” Vismistananda is superb in the lead and an impressive young lady. Omg Bak and Tony Jaa bought Thai martial arts to international movie goers attention and this young thing has taken it on here. She really throws herself around and like with many Asian Extreme films stunt men and women are hard to find on set. The actors do a lot of the stunts and it hurts. Jacky Chan sets were notorious for it. Like Chan’s stuff the fight scenes here are well worked out, great fun and very unrealistic. But lack of tacky wire work and CGI gives this a rawness that makes it very appealing over Honk Kong cinema. The closing credits sequence lists their falls and tumbles.

The film originally included Zen’s character watching scenes from Bruce Lee and Jackie Chan movies (in addition to Tony Jaa), but these scenes were cut due to licensing problems. This also caused other scenes to be cut. There are still plenty of scenes left playing homage to these three. It’s very much about that in its story and action sequences, a nice mix of sharp suited Yakuza, downtown mobsters and romance and story. Slows down a little bit at the start and sags in the middle but once Zen has matured to a young adult the martial arts and gang and gun play takes over and fun to be had. It’s still a cracking fun two hours and you won’t be bored.

Lots of broken bones and tumbles.

We meet the amazing young actress who made the film

A look at the various martial arts and techniques

-The spirit of chocolate-

Boston Globe –‘It’s called Chocolate, but Cheese would have been just as good. Soaked with tears, full of schmaltz, and yet strewn with bodies, Prachya Pinkaew’s new kick-’em-up is extreme action, extreme melodrama, and extremely hard to resist’.

Villa Voice –‘The world may not have needed a Thai-language martial-arts hybrid of Kill Bill and Rain Man, but by God, it’s got one now’.

The Star –‘Character development and cogent storytelling are in short supply. Yeah, so?’

The Mail –‘Anyone knows we all come here just to see the girl kick serious behind. At least she does just that, and after a while Chocolate mainly and plainly feels like the exhibition that it is’.

Time Out –‘The heart of the film may be its action sequences but, even outside the battle arena, ‘Chocolate’ is a nicely characterized and consistently likeable piece of work’.