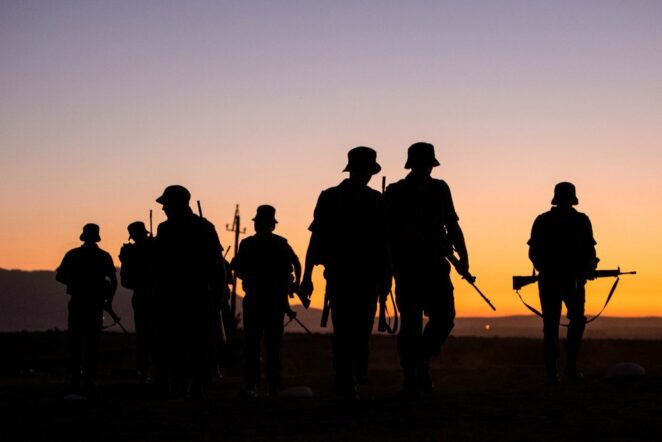 I met South African director Oliver Hermanus for the second time. First I saw his film “Beauty” (2011), this time we watched his latest film, Moffie (2019), which tells the story of the 1981 booming militaristic white regime in South Africa.

The story of young sixteen-year-olds who are called up for military service and are beaten and mocked there by all who are not lazy to do it. Basically, the film is quite sadistic, I would recommend weak-nerves viewers to think carefully about whether the militaristic means of percussion will affect you in any way.

However, the director is moving far away from his first film. In both films, the central problem is related to sexual identity, only “Moffie” is really a better thought out and focused film.

A sixteen-year-old handsome and gentle boy falls among sadistic officers and teaches them all to be ammunition for meat cannons. For a long time I was outraged by those very similar images I have seen many times when young conscripts are tortured for fun but suddenly comes the realization that not only for fun but also because they no longer feel anything, especially the fear of dying.

The fearless warrior can be useful and unconditional to carry out orders in extreme conditions. In fact, that classic way of enslaving the mind to an absolute break in the film is not a joke, but the counterweight and intrigue in the film is precisely the intersection of the problem of masculinity and homosexuality, which is known to be undesirable on the battlefield.

In this film, everyone suffers from non-recognition, from hiding, from the system, from the state of war. It is a time permeated by suffering that has driven many young people in South Africa crazy.

When you rely on historical events, when you have not only a personalized story but also compelling circumstances, the film always seems more interesting and universal than just a story about homosexuals.

Of course, the film is brutal, rude, unkind, leaving a rather depressing mood, but talking about universal problems, about pacifism, about the need for gentleness for all, regardless of orientation, because the brute force that is generally considered dominant can kill millions of lives, sometimes without losing not a drop of blood.

Persuasive, strong, but, in fact, a lot of the plot twists and turns of history have already been seen in one way or another in the films.