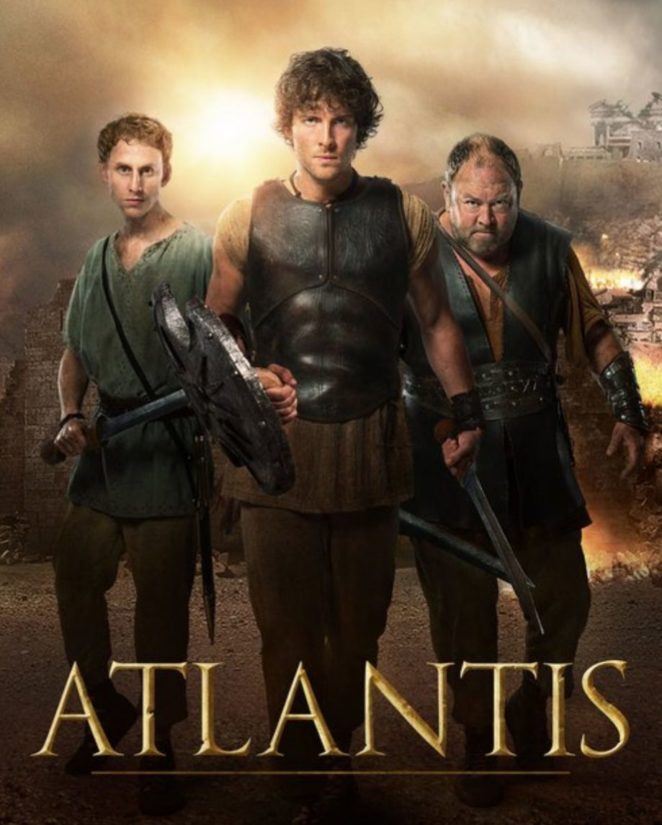 Atlantis is a fantasy-adventure British TV series, that inspires Greek mythology including the legend of a long lost continental island believed to have advanced civilization thousand years ago — the Atlantis. Premiered on September 28, 2013 with 2 seasons, this highly-appraised series was created by Julian Murphy, Johnny Capps and with Howard Overman.

During its time, this series was claimed as one of the biggest Saturday night drama series across all BBC channels since launched on 2006 and even up on the launch show of Merlin. Atlantis even lured a million viewers from X-Factor, a highly popular ITV show aired at the same time in United Kingdom.

Atlantis is all about the story of a Greek hero touched by the gods and chosen to as the true heir to the throne of Atlantis. He’s no other than but Jason. The main protagonistic character is played by British actor Jack Donnelly (Jason Winkler of Anubis/ Olly Hunter of United We Fall/ White Rabbit of Misfits). Jason lives with his two closest companions namely Hercules and the man who introduced Pythagorean theorem in our Mathematics class — Pythagoras.

Hercules, as we all know is one of the most famous Greek myth heroes of all time. Yet in this series, he was depicted as the fat, old man played by an award-winning British actor prominently played the role of King Robert Baratheon of Game of Thrones, and that promising and respective actor is no other than but Mark Addy, who also played roles in The Full Monty as Dave, Robin Hood as Friar Tuck, A Knight’s Tale as Roland, The Time Machine as David Philby, the Steamer Captain of Around the World in 80 Days, and Mac MacArthur of Jack Frost.

We all know that Pythagoras is one of the famous ancient mathematicians ever taught by our Math teachers, and that supports his character here as played by a British actor Robert Emms, who also played aspiring roles like Charles Renbock of Mirror Mirror, Insect Man of Kick-Ass 2, Father John Gerard of Gunpowder, David Lyons of War Horse, Steven of Apostasy, Vitus Gerulaitis of Borg McEnroe, and also playing as Jack in the upcoming 2018 movie Jurassic World: The Fallen Kingdom.

Another character that adds up to Jason’s love life is Ariadne, a princess who is the daughter of King Minos who has great marksmanship when it comes to archery. She has fallen in love to Jason, and had saved her many times especially at peril. She is played by an exotic and alluring mixed-race of Middle Eastern beauty and British descent Aiysha Hart, who also played in Line of Duty as Sam, Leila Sayyad of New Blood, Mona of Honour, Sarah of Djinn, and her latest role is Polaire in an upcoming movie Colette.

Playing as the antagonist is an English actress Sarah Parish in the role of Queen Pasiphae, an evil queen who has a lust to claim the throne, doing all sorts of mischief and treachery to sit on a royal seat. Sarah Parish also cast as Lady Catrina in an Arthurian legend TV series Merlin.

Atlantis is really indeed one of the best literary-based series introducing some of the prominent creatures and characters such as one of the three Gorgons whose gaze can turn you into stone — Medusa; a half-man half-bull monstrous tyrant inside a labyrinth — Minotaur; the famous archer Atalanta, the crafty father and son who invented the labyrinth — Daedalus and Icarus; the foresighting priestess Cassandra; the witch who loves Jason — Medea, and a lot more.

Watching this series will also tell you how Jason formed his Argonauts, his crew for a ship Argo in search of the sacred magical-deflecting ram called the Golden Fleece in Colchis – an epic adventure which is supposed to be on the third series, yet BBC didn’t renew its season 3, as they announced it on January 23, 2015.

If your bailiwick is all about Greek mythology, this one will certainly bring you to a Hellenic realm where something about Greece and among its people has really serious  matters when it comes to heroism, faith, and worship.

One of the successful Greek myth I’ve ever watched so far aside from Young Hercules where the young Ryan Gosling portrayed the role. The series is played very well by formidable actors that surely captivates everyone, even though the story didn’t end up victorious to the protagonists. Despite all of that, fulfillment is still what I felt after done watching all its episodes.

A series that can be a source of literary media to all those whose penchant is all about Greek mythology. You will never regret watching each episodes starting from the first to the last. Never miss to watch this coz I really strongly recommend.

If you haven’t watched this series yet, just check out this link below: