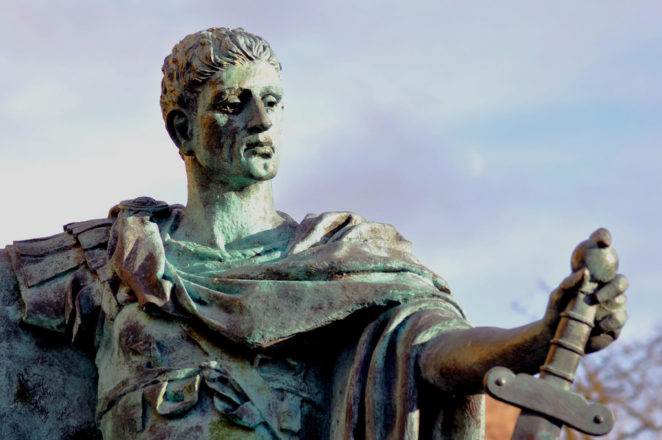 Have you ever wondered why people go to Church on Sundays, as opposed to any other day of the week, and why Sunday is a “day of rest” even for those who don’t? We have a semi-pagan Roman Emperor to thank!

Constantine, who ruled as Emperor from 306 to 337, is credited as being the first Christian Emperor, the legend being that he had a vision of Christ during the Battle of the Milvian Bridge in 312 that convinced him that adopting the Christian religion was the key to victory. With the battle won and his pagan enemies put to flight, he and his subjects all became overnight Christians.

However, the story is nothing like as straightforward as that. The word that best defines Constantine is “ambiguous”, and it is impossible to be certain where the borders lay between the Christian and the politician within the person of the Emperor. One thing that is definite, however, is that Constantine’s motivation was always based on the furtherance of his power and the safety of the Empire.

On 7th March 321 Constantine issued a decree that stated: “On the venerable day of the Sun, let the magistrates and people residing in cities rest, and let all workshops be closed”. He did not, however, place restrictions on agricultural work, on the grounds that food production was too important to be interrupted.

There were also political and practical reasons for the choice of Sunday. It was pay day for most workers, and many Christians had already adopted Sunday as their day of worship – although this was far from universal, with Saturday being preferred by Christians in Rome and Alexandria.

(The Battle of the Milvian Bridge)

Although the Emperor was the most powerful man in the Empire, a wise one always governed – as far as possible – in accordance with the general will of those being governed. The senatorial upper classes, from whom any opposition was most likely to come, were also devotees of Sol Invictus and they were therefore likely to accept a move that recognized the place of their chosen deity alongside that recently adopted by the Emperor. If you rule an Empire that contains both Christians and pagans, and can please both communities, why not do so?

Of course, there were some who objected to the edict and stuck to their previous practice, and even today there are groups such as the Seventh Day Adventists who see the Jewish Sabbath, on Saturday, as being the day laid down in Genesis as the day of rest. However, most Christians see no problem with following the dictate of a Roman Emperor from 1700 years ago. That said, the modern practice of taking two days off as the “weekend” of both Saturday and Sunday does seem to make the debate a somewhat academic one!