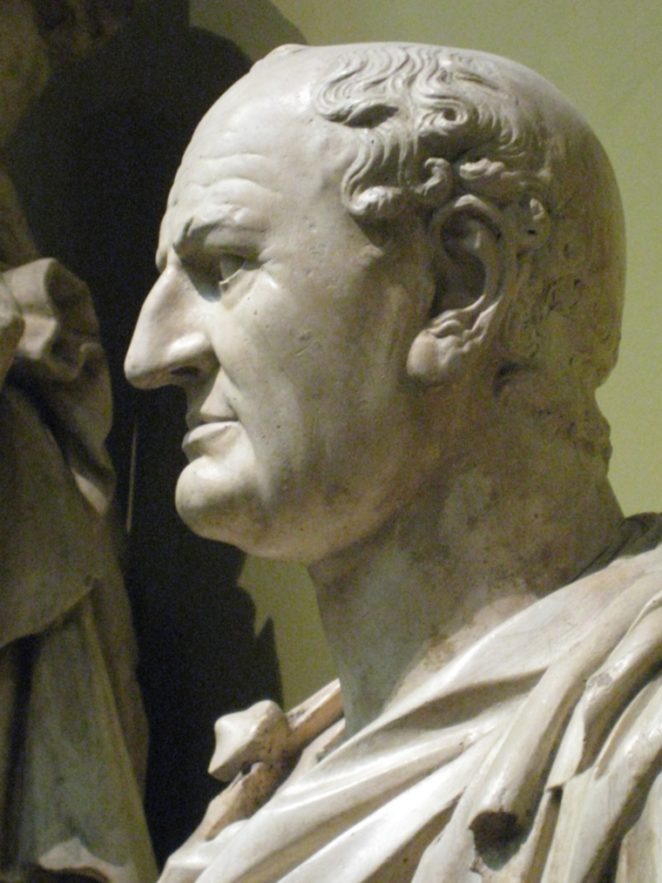 Titus Flavius Sabinus Vespasianus (known to us as Vespasian) was born on 17th November 9 AD in the Sabine country near Rome, into a relatively poor family although his mother was the sister of a Roman senator. She was widowed at a young age, and so had to bring up two boys on her own.

Vespasian joined the army and served as a military tribune in Thrace, serving later in Crete and Cyrene and rising through the ranks. He married and had two sons, both of whom would later become Roman Emperor in turn (Titus and Domitian).

He served under Claudius during the latter’s campaign to conquer Britannia in 43 AD, and led the 2nd Legion Augusta in capturing the Isle of Wight and then defeating the Durotriges tribe in Dorset at their fortresses of Badbury, Hod Hill and Maiden Castle.

He served as consul in 51 AD and as proconsul of Africa under Nero. At no time did he acquire any personal wealth, although there were accusations that he was dishonest in his financial dealings. Had he been so, he was clearly not very good at fraud and embezzlement!

He was sent east in 66 AD to conduct the war against the Jews, and it was while he was in the region that civil war broke out in Italy after the death of Nero. His growing reputation as a “safe pair of hands” led to him being proclaimed emperor at Alexandria on 1st July 69 AD in opposition to Vitellius, to whom he had at first declared his allegiance.

This was clearly a popular move in the eastern part of the empire, with many legions and governors rallying to his cause. One of his supporters, Antonius Primus, invaded Italy from the north and deposed Vitellius on reaching Rome. Vespasian’s envoy, the orator and historian Mucianus, then took over and held the city awaiting Vespasian’s arrival, which happened in 70 AD. Because Vespasian’s reign can be dated from the death of Vitellius on 22ndDecember 69 AD, Vespasian counts as the fourth emperor during the “Year of the Four Emperors”.

(The Triumphal Entry of Vespasian, by Viviano Codazzi and Domenico Gargiulo)

Vespasian was able to restore order to a troubled Rome. He made immediate changes in the army, so that mutinous soldiers were replaced by loyal ones, and he worked alongside the Senate in the public administration. His character was clearly very different from that of some of his recent predecessors, notably Vitellius and Nero, and this went down very well with people of all classes in Rome.

Above all, he had no personal vanity and was able to get on with anybody, from any station in life. He felt no shame about his humble origins and ridiculed attempts to create a distinguished genealogy for him.

He was very proud of the achievements of one of his sons, Titus, and horrified by the behaviour of the other, Domitian. He was therefore happy to share his triumph in the Jewish wars, in 71 AD, with Titus, and took careful steps to ensure that Domitian was kept under suitable restraint.

Vespasian continued to expand the empire, sending Agricola to North Wales in 78 AD, and securing the borders in Germany. He reformed the Praetorian Guard, ensuring that its ranks were only levied from within Italy.

Although he was very sound as far as public money was concerned, and did much to restore the empire’s financial well-being (mainly through raising taxes) he also left behind some buildings of note. These include the Temple of Peace and the rebuilt Temple of Jupiter Capitolinus, but the best known is surely the Colosseum, begun in 72 AD, which was deliberately built on the site of Nero’s unfinished palace.

(The Roman Forum, with some of Vespasian’s buildngs)

In the summer of 79 AD Vespasian’s health started to fail, although he was determined to keep working for as long as he could. Having ensured a new dynasty through the nomination of Titus as the next emperor, he declared that an emperor should die standing and did exactly that, remaining upright until he died, on 24th June 79 AD, at the age of 69.

It cannot be doubted that Vespasian was exactly the man that Rome needed at the time, given the chaos that had preceded his reign. It was however unfortunate that the stability he had engendered was to tread an uncertain path in the years to follow.