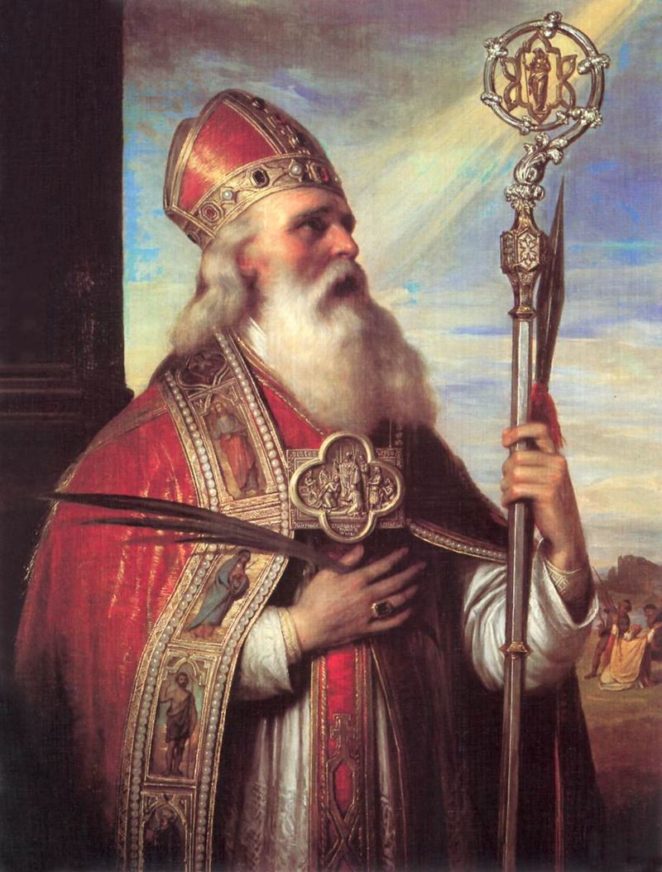 Adalbert was born Voytech (Vojtech) into a noble family in Libice nad Cidlinou, Bohemia in 956. His father was Prince Slavník, a rich and independent ruler of the Zličan princedom, and his mother Střezislava. He had five full brothers and one half-brother resulting from an affair his father had. He was taught in part by St. Adalbert of Magdeburg whose name he took when he was baptized.

Adalbert finished his studies in 980 and returned to Prague to be ordained. His father died in 981 and, in 982, Adalbert was made bishop of Prague. Despite his noble birth, Adalbert chose to live in poverty. Pagan practices were still deeply entrenched in the people and polygamy was common. He also opposed Christians participating in the slave trade. His clerical reforms made him unpopular with some powerful people who drove him into exile after eight years. He went to Rome where he lived as a hermit at the St. Alexis Benedictine monastery.

However, the people loved him and made many requests for his return so, in 993, Pope John XV sent him back to Bohemia. He was made bishop again and established a monastery in Břevnov, near Prague, the first monastery in Czech territory.

The nobility continued to oppose him. In 994 Adalbert offered his office to Strachkvas, a member of the Přemyslid dynasty and Duke Boleslav’s brother. Strachkvas, who turned him down.

In 995, the Slavniks’ former rivalry with the Přemyslids (and their Vršovcis allies) resulted in forces led by Přemyslid Boleslaus II the Pious storming the Slavnik town of Libice nad Cidlinou, During the battle four or five of Adalbert’s brothers were killed. The Zličan princedom became part of the Přemyslids’ estate.

Adalbert fled from Bohemia despite the pope’s call for him to return to his bishopric. Strachkvas was appointed to succeed him but, during his installation ceremony, he mysteriously died.

He spent a short time ministering in Hungary and then went to evangelize those who lived near the Baltic Sea in Prussia. It was here that he and two companions were martyred by pagan priests.

Adalbert’s body was held for ransom and buried in the Gniezno cathedral in Poland. In the mid-11th century his relics were moved to Prague and placed in the St. Vitus Cathedral.

Adalbert is held in great honor in the Czech Republic, Poland, Hungary and Germany.

“O God, [you] bestowed the crown of martyrdom on the Bishop St. Adalbert, as he burned with zeal for for souls, grant, we pray, by his prayers, that the obedience of his flock may never fail the shephered, nor the care of the shepherd be ever lacking to the flock.” (Roman Missal, Common of a Martyr in the Easter season).