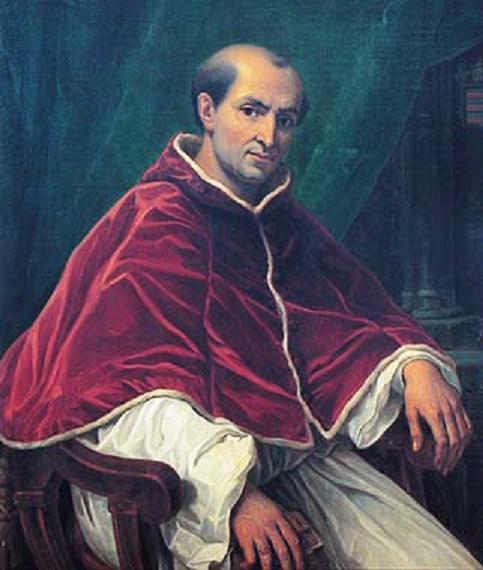 It was not a good time for the church. Simony (the selling of blessings, church offices, anything sacred) was rampant. It was said that everything was for sale. It was during this period that the practice of selling indulgences, which resulted in a division in the church that has lasted until modern times, began.

In western Europe, the Catholic Church was the only Christian religion. As far as the common man was concerned, the pope held the keys to Heaven. (The Eastern Orthodox churches existed but were irrelevant to the average westerner of the time.)

The pope is supposed to be a spiritual leader but the temptation of political power had long since infected the office. Pope Nicholas IV died in 1292. At the time the process for electing a new pope was not set like it is today and there was a lengthy dispute. After several years without a pope a monk by the name of Peter of Morrone wrote to the cardinals warning them that, if they did not get their act together, they would face divine vengeance. The cardinals responded by making Peter pope. Peter took the name of Celestine V but he was completely lacking in any leadership skills so, a few months later, before he could even move to Rome, he resigned. He was succeeded by Boniface VIII. Unfortunately for Celestine there was no established procedure for a pope to resign and Boniface was afraid that his predecessor might cause problems for him, kept him imprisoned until his death a few years later. (Celestine was the last pope to resign until 2013 when Pope Benedict XVI retired for health reasons.)

Boniface got into a series of disputes over temporal power, primarily with Philip IV of France and decided to make a power grab. He issued the bull Unam sanctam which proclaimed that it “is absolutely necessary for salvation that every human creature be subject to the Roman pontiff,” the most extreme declaration of papal supremacy. (The argument over whether or not his decree should be considered binding today is still a point of contention.) However Boniface did return the papal court to Rome. The conflict between Boniface and Philip escalated when the French king started taxing clergy. Boniface issued a papal bull banning the taxation of the clergy and Philip responded by banning the export of money from France, an act which put a huge dent in the papal treasury. Boniface relented allowing “voluntary” contributions, but relations continued to decay. While Boniface was on a retreat at Anagni, Philip’s forces imprisoned him. He was released after three days but died shortly thereafter. The rumor was that he killed himself by bashing his skull into a wall.

Boniface VIII was succeeded by the short-lived Benedict XI who was, in turn, succeeded by the French-born Clement V who moved the papacy to Avignon. Clement held a posthumous trial for Boniface charging him with heresy and sodomy. (There was no real evidence for the charge of sodomy. That was, most likely, created from thin air.) Clement persuaded Philip to allow the Council of Vienne (1311) to make the final judgment. Three cardinals appeared before the council defending Boniface’s orthodoxy and, when two knights threw down the gauntlet maintaining his innocence with a wager of battle, no one took up the challenge. The matter was declared closed. Clement was also known for suppressing the Knights Templar.

In all, seven popes reigned from Avignon:

The End of the Church’s “Babylonian Captivity

The Avignon Papacy was such an embarrassment to the church that it became known as “the Babylonian Captivity of the Church.” The papacy needed to be restored to Rome.

On 31 Mar 1376 Pope Gregory XI placed the city-state of Florence under interdict because they refused to help him in his war against the Visconti of Milan. (An interdict means that the sacraments, which the church views as necessary to receive saving grace, could not be given. The purpose was to get the locals to put pressure on authorities to stop doing whatever resulted in the interdict.) In June (Saint) Catherine of Siena went to Avignon to make peace. She could not convince him to life the interdict but, while she had the pope’s ear, she was able to convince him to return to Rome which he did in Jan 1377.

Things did not go well when the papacy returned to Rome. When Gregory XI died, he was succeeded by Urban VI. However, back in Avignon, Clement VII claimed the office. (He is considered one of the antipopes.) Upon his death Benedict XIII claimed the office. This period of disputed popes is known as the Western Schism. Eventually things got sorted out.

This does not mean that, during this period, there were multiple popes. There can be only one pope at any given time although there may be multiple claimants to the position.