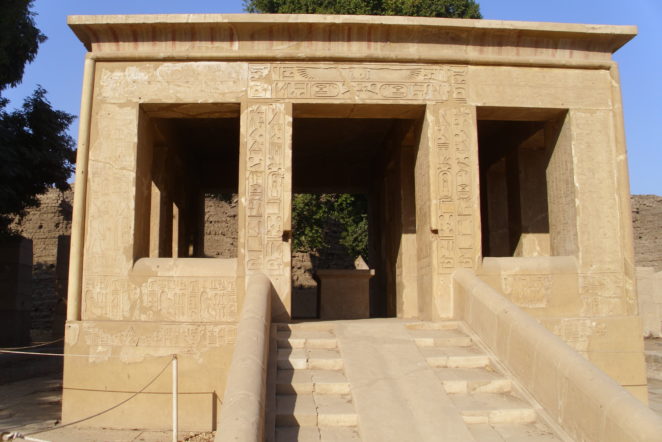 (Author’s own photograph, the White Chapel of Senwosret III at Karnak Temple, Luxor)

Until my father pointed it out the other day, I had never realised what he was doing. The irony is that what he was trying to teach me was exactly what I’ve been telling students at open days for the last three years.

Let’s go back to when university was but a twinkle in my eye. I was studying all humanities subjects, and utterly convinced that I was going to study English at university. It had been my strongest subject for years, except perhaps for history, and teachers and I had both come to the conclusion that that was what I was going to do for those three years. My creative writing aspirations only made that look more likely.

Now imagine my surprise when university started being talked about, and dad inexplicably got it into his head that I should look into law courses. No offence intended, but I couldn’t (and still can’t) imagine studying anything more boring. Law has never appealed to me as a specialism. There are bits of it that I find fascinating, but to actually commit lock, stock, and barrel to it is beyond my comprehension. Dad was adamant, and I looked up courses and universities for a few weeks and didn’t take to the idea.

At about this time, the students at my school who were deemed ‘gifted and talented’, and therefore the most likely to have a cat’s chance in hell of getting into Oxbridge, were shoved into a minibus and driven to our nearest city for a day. This wasn’t a whimsical trip by the teachers, much as they were known for doing odd things, but a trip to visit a touring set of talks that Oxford and Cambridge were doing together. It was very well done. There were talks on all the most common subjects, and on applying and funding, and of course a lot of free stuff. I took a prospectus for each university, along with some other rubbish, and aside from enjoying the talks didn’t really know what to do with all of this information which had just been dumped on me.

I was leafing through the Oxford prospectus one day, particularly looking at subjects I was actually interested in, when I found a page entitled ‘Oriental Studies’. The opening paragraph to that subject sold it as the opportunity to do something I hadn’t done at school, and to look at civilisations which don’t get all that much of a look-in, if any, in the national curriculum. I thought that that sounded pretty cool. The first page had degrees like Islamic Studies and Arabic. I turned the page and there were more degrees, like Chinese, Sanskrit, and Jewish Studies. One degree caught my eye. Egyptology. I didn’t know you could do a degree in that. I’d always loved ancient Egypt, and mum had been learning hieroglyphs in the years since we visited when I was a child. Even dad, the eternal scientist, liked documentaries on ancient Egypt when they were on TV. I remember vividly walking into my parents’ bedroom while mum was folding clothes on the bed, and saying ‘I want to do Egyptology at Oxford’. I remember the pause, and the ‘riiiiight’ face that she was pulling as she slowly put down what she was holding. She said ‘and what does that involve?’, which led to an interesting conversation with dad and a jam-packed open day visit to Oxford with him.

Fast forward three years and a degree in Egyptology at Oxford…

I’ve tour guided around my college and helped at open days at the Oriental Institute, and I’ve always told prospective applicants to do what they want at university. What you do should be something you enjoy, and you should focus more on the skills than the content when seeking employment afterwards, particularly with the humanities. Oriental Studies is fantastic for that, because it’s an area study which involves skills from languages, history, and literature all mixed together into a weird humanities cocktail.

It wasn’t until dad pointed out that it was still a success for him even though I hadn’t done law that the obvious became clear. He wasn’t interested in me doing law. He was interested in me looking at all of my options rather than just choosing my best subject at school for university. It’s a logical progression to do that, and narrow subjects down each step of the way through education, but once you hit university the world is your oyster. As I say, it’s more about the skills that you gain than the content that you study, so you’re welcome to study whatever you want, not just what teachers in a small school say you’re good at. It’s such a big time and financial commitment that it’d be a mistake to do something just because you think you should.