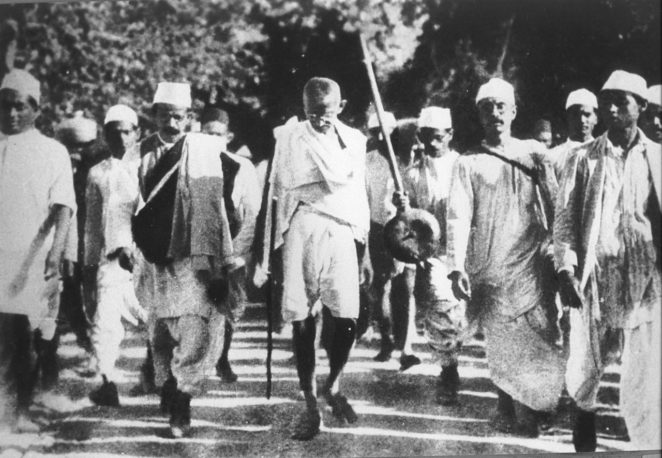 A protest march in 1930 that started with 80 people was seen in later years as a major step on the path towards India’s independence from the British Empire.

Mohandas Gandhi (1869-1948) was a London-trained lawyer who sought to fight against the British Raj by wholly peaceful means. One cause of discontent was the tax levied on the Indian population for the purchase of salt, which was essential for the preservation of food in the notoriously hot climate of India.

The protest march began in the state of Gujarat. It lasted for 24 days, averaging ten miles a day. The route of the march led towards Dandi, on the Arabian Sea coast.

As the march progressed it attracted thousands more followers and eventually the procession of people was more than two miles long. Gandhi also addressed large crowds of people at stops along the way and at the march’s conclusion.

At the end of the march Gandhi encouraged his followers to break the law by making their own salt from seawater, this being a significant act of civil disobedience.

The Salt March was the first major example of non-violent direct action against India’s colonial rulers. Seventeen years later Gandhi and his followers achieved their aim when the independence of India was declared.