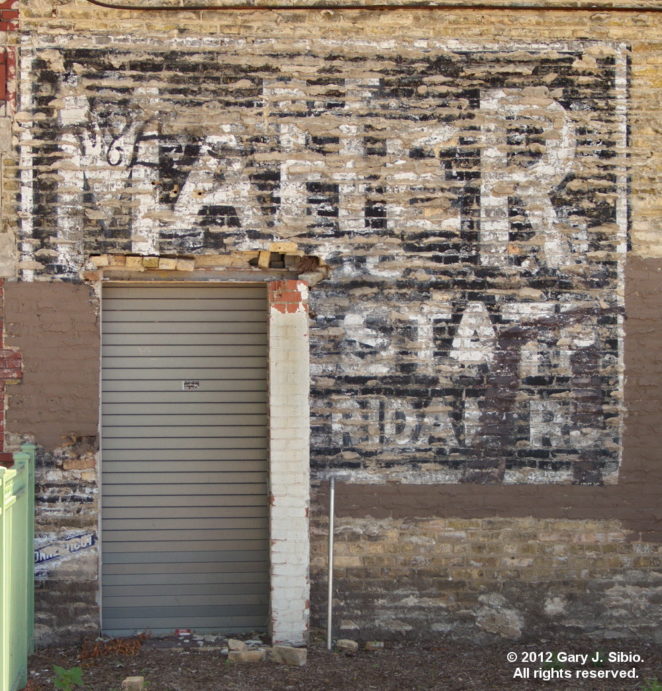 Until it was torn down a few years ago to make way for a hotel, the north wall of the building located at 6568 North Sheridan Road, Chicago, Illinois, in the Rogers Park neighborhood, was home to an old sign painted on the bricks. These signs are known as ghost signs and Chicago has a lot of them. This one advertised “M.E. Maher Co.” If you looked closely you may also see the words “Estate” and “Sheridan Rd.”

Maurice Edward Maher was born in Illinois to Irish parents  Bartholomew Maher (1830-1904) and Margaret Wolfe Maher (1827-1906) on 24 Apr 1869, the youngest of six children. In 1892 he married Julia Casey and together they had three children: Edward N. (b. c. 1893), Jeremiah Leonar (b. c. 1896), an Julia (b. c. 1899). Maher operated a grocery store (Wolfe & Maher) with his maternal uncle, Edmund Dean Wolfe, in Superior, Wisconsin. A couple of years later Wolfe left for Montana and Maher moved to Streator, Illinois, a town located 81 miles southwest of Chicago. He started off in the lumber industry but, in 1901, got involved in real estate.

Shortly afterwards he came to Chicago to pursue real estate sales. He was also elected to the Illinois General Assembly. Sometime before 1930 he gave up the real estate business – perhaps because of the stock market collapse and the Great Depression. The 1913 Chicago phone book shows a listing for the Maher, McDonald and Co. Real Estate Co. at 6558 N. Sheridan Road, but it was not included in the 1929 phone book.

Maher moved his family back to Streator where he farmed. Julia died in 07 Jul 1936 and, in 1940, he returned to Chicago as a rodsman for the Cook County highway system. (A rodsman is the person who carries and holds the leveling rod used by a surveying party.)

Maher moved out to the suburbs where, on 20 Nov 1964, he died at the age of 95. His funeral was at St. Mary’s Church in Elgin, Illinois and he was buried in Streator.