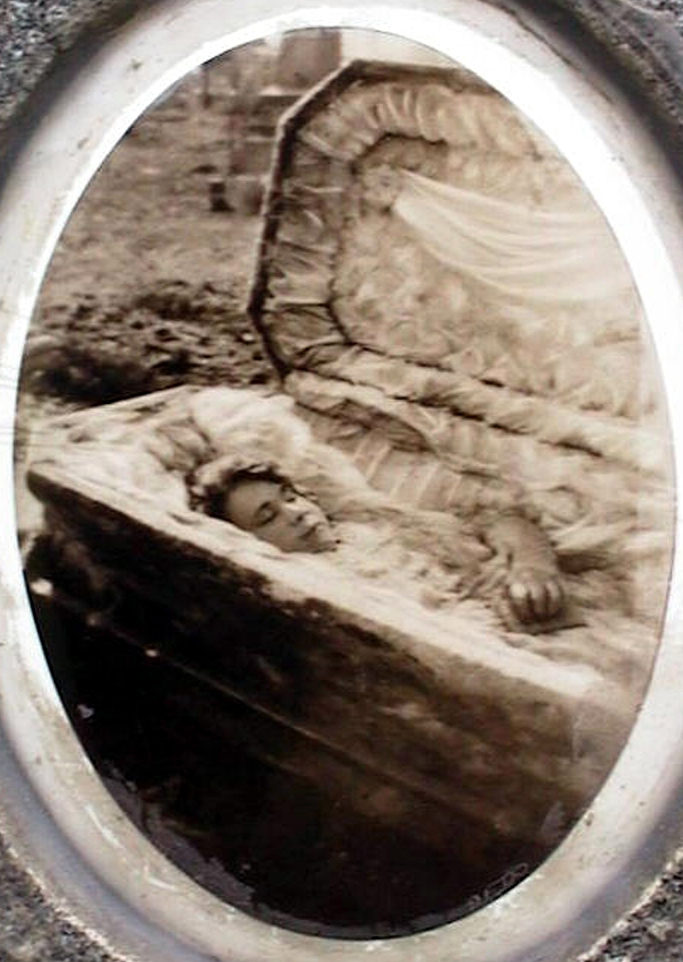 The body of Julia Buccola Petta in her coffin

In 1892 Filomena Buccola gave birth to a girl to whom she gave the name Julia. The girl was born in Palermo, Italy but, in August of 1913, Julia and her mother, came to American where they moved in with her brother, Henry (Enrique), who had come over in 1909. They lived in the part of Chicago now known as West Ukrainian Village.

On 06 June 1920 Julia married Matthew Petta at Holy Rosary Church (612 North Western Avenue, the church still stands) but, sadly, she died on 17 March 1921 at the age of 29 while giving birth to a stillborn son who was given the name Filippo. This is almost exactly nine months after she and Matthew were married.

Julia was buried wearing her wedding gown in Mount Carmel Cemetery in Hillside, Illinois, a suburb of Chicago. Filippo was buried with her with her arm around him.

A legend surrounds her grave. After her death, Julia’s mother Filomena experienced a series dreams in which Julia told her that she was still alive. There are no contemporary sources to verify this but her great grandchildren report that Filomena’s nightmares may have started about five years ofter Julia’s death, when the family moved to Los Angeles. Filomena moved back and forth between Chicago and Los Angeles until she died in 1945.

Filomena had Julia’s body exhumed six years after her death. Although the coffin was starting to deteriorate, Julia’s body had remained intact with the exception of the arm which held her stillborn son. It is possible that her body had been embalmed.

After the body was exhumed, a monument with a life-sized statue of Julia was made which features a photograph of Julia and Filippo in the casket. There is also a photo of Julia in her wedding dress. It is believed, but is far from certain, that the exhumation and new monument was paid for by her brother, Henry Buccola. (The original monument no longer exists and there are no known photos of it.) It is not known how her mother was able to convince authorities to exhume the body.

Filomena died in Los Angeles in October of 1945 but is buried a few feet away from her daughter at Mount Carmel. Her plot is unmarked but her name appears twice on the monument. There is another plot between the two. Matthew Petta died in Chicago in May of 1945 and is buried at All Saints Catholic Cemetery on River Road in Des Plaines.

There is a tradition that Julia’s ghost moves around Mount Carmel at night. Her grave is located near the Harrison Street entrance to the cemetery and the figure of a ghostly woman has been reported there. One story says that a young boy was accidentally left by his family at the cemetery. When they returned for him there was a ghostly woman in a long white gown holding his hand. She disappeared when they saw them.