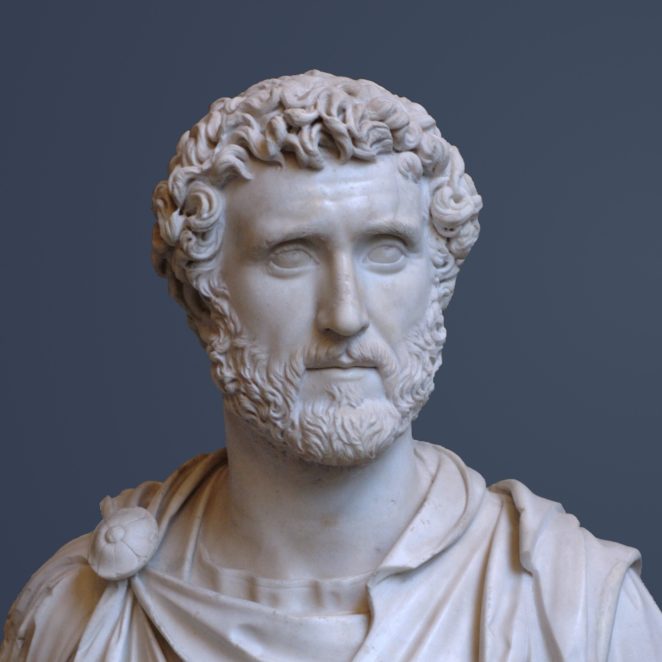 Antoninus Pius was Emperor of Rome from 138 to 161. However, despite this long reign (second only to that of Augustus out of all the emperors) he is one of the lesser-known Roman emperors. This is due to the fact that during those 23 years hardly anything happened!

Antoninus was born into an aristocratic family on 19th September 86 at Lanuvium, which is about 20 miles from Rome. He rose smoothly up the ranks of the Roman governmental system and included a spell as governor of Asia from 130 to 135.

He made a very good marriage in around the year 112 (the exact date is unknown). This was to Annia Galeria Faustina, who was the aunt of Marcus Annius Verus, a young man who was highly favoured by Emperor Hadrian.

Hadrian had no natural sons of his own, and, when his initial choice of successor died unexpectedly, he adopted Antoninus as next in line. Various conditions were attached to the adoption, including that Antoninus must agree to adopt, in his turn, both the young son and the intended son-in-law (i.e. Marcus Annius Verus) of Hadrian’s original choice as successor. Given that Antoninus was already in his 50s at the time and with no natural sons of his own, Hadrian clearly wished to establish the succession for the foreseeable future.

The title Pius (meaning “dutiful”) was added to Antoninus’s name in recognition of his loyalty to Hadrian’s wishes. He also fought to clear Hadrian’s name – he had made many enemies among the Senators who promptly declared him “hated by all” at his death – by persuading them to lift this “damnatio memoriae” and allow Hadrian to be deified.

As emperor, Antoninus went out of his way not to cause offence with people in all stations of life, and thus made few enemies during his long reign. He was personally generous and ready to give immediate aid when disaster struck, such as when 1,000 spectators were killed and many more injured when a grandstand collapsed at the Circus Maximus.

He chose his governors and administrators wisely and instructed them not to levy excessive taxes on the people under their control. A general feeling of well-being pervaded the Empire as a result, marking what was probably the high point of the Empire in terms of overall prosperity.

There were no major wars, no scandals, and only one example of an execution of a would-be challenger to Antoninus’s authority.

Unlike his predecessor, Antoninus saw no need to tour the Empire in order to protect its borders, and did not set foot anywhere beyond the Italian peninsula during the whole of his reign.

This is the poor relation of Hadrian’s Wall, being a construction mainly of turf blocks laid between the estuaries of the Firth and Clyde in Scotland. It was therefore much shorter (39 miles as opposed to 73 miles) and less impressive than Hadrian’s Wall, and it was much less effective.

The wall was built on Antoninus’s orders on the advice of Quintus Lollius Urbicus, the governor of Roman Britain who harboured ambitions to extend Roman influence into Scotland.

The wall took twelve years to build and was intended to mark the ultimate limit of the Empire 100 miles further north than Hadrian was prepared to go. However, this proved to be a short-lived venture and the Wall was finally abandoned in 163 only eight years after its completion.

The Wall only just outlived the Emperor who built it. Antoninus died in 161 at the age of 74. His loyalty to Hadrian’s wishes outlived him in that his two adopted sons ruled jointly, just as Hadrian had intended.

(The Antonine Wall in Southern Scotland)