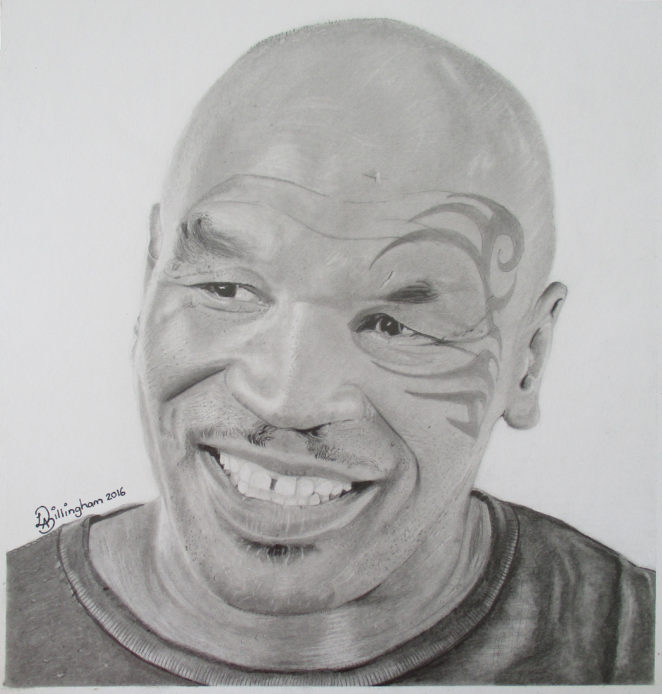 This is a drawing I did last year of Mike Tyson. I used standard graphite pencils, HB, B and 2B on heavyweight white artist grade paper.

Tyson divides opinion and has had a lot of controversial moments both in and mainly out of the ring. I happen to be a Tyson fan; Tyson the boxer that is, but even in his private life, if you really research it he was duped badly both by his vindictive ex-wife and her mother and a lot of so-called ‘friends around him’. He was also innocent of rape in my book, especially when you research the self-titled ‘victim’ who has done the same to several men before.

OK, then he did go off the rails a little by biting off Evander Holyfield’s ear, which was stupidity personified, but, by then, although there can be no excuses, he had been driven to the edge.

Anyway, you could fill a book with the arguments for and against so let’s talk about the boxing.

Tyson was the youngest Heavyweight champion in history and when he exploded onto the scene nobody could deny that the kid had more raw power and natural talent than anybody had ever seen.

I personally believe that he had it in him to be the greatest heavyweight of all time and if it wasn’t for all the bad influences and bad decisions in his personal life he would have been.

Looking back at his early fights even you can see that along with the raw power and ferocious speed he also had a boxing brain. A lot of people may not realize that Tyson was quite knowledgeable when it came to boxing. He studied countless boxing styles and could tell you about any boxing champion or legend; even obscure boxers from the nineteenth century, which most of us have never heard.

I reckon he did pretty well for a kid off the streets of the ghettos who was destined for gang life and prison.

It’s easy to judge, but sometimes you have to look through the cracks and Tyson was a kid who wanted to become a good boxer to escape his horrid childhood and in the end became the very target that his infamy portrayed him as and most of the time through no fault of his own, but through the heinous and greed driven acts of others.