Many people don’t realize that there is a difference between a wolf and a coyote. At a distance, a wolf and a coyote often look very similar. After all, both are canines or members of the dog family. However, looking closer shows that they have quite a number of differences, just as a Great Dane and a miniature poodle may both be domestic dogs, and yet quite different from one another.

Up close, the difference in size between the two species is usually very noticeable. Although a coyote is sometimes called a yellow wolf, it rarely gets anywhere close to the size of its cousin. Not only is a coyote normally shorter at the shoulder, they are also lighter in weight and their body isn’t as robust. Even the smallest subspecies of wolf is substantially bigger than a coyote. 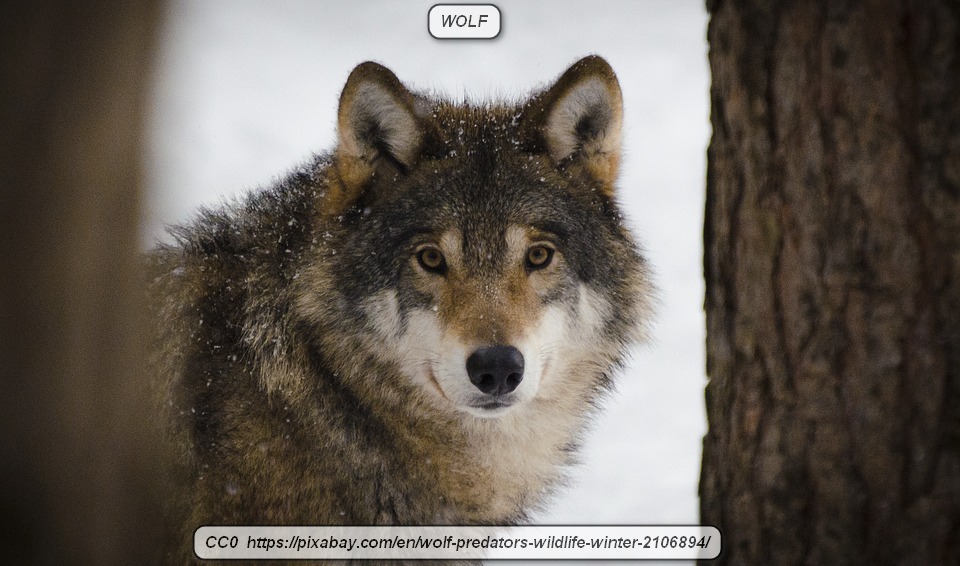 For the size of the body, a coyote has slender legs that are somewhat longer in proportion than the legs of a wolf. This is especially easy to see from close up. However, this difference can also be seen at a distance and can quickly identify which species is being observed.

The muzzle of a wolf is also thicker and shorter, much like that of a Husky or German Shepherd. The snout of a coyote is long and narrow and the head is thinner from side to side, making them look almost fox-like. This trait starts showing itself when the pups begin to fill out and look more like their mothers and fathers.

It also isn’t uncommon for wolves to have a denser pelt than coyotes. Wolves need the denser fur for their hunting habits and for surviving in the northern reaches of their range. 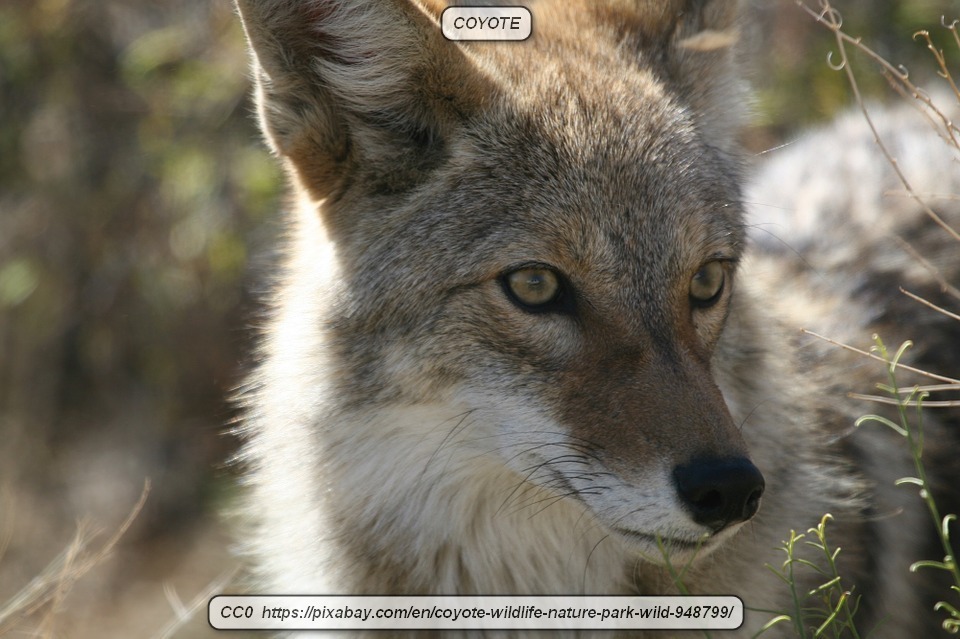 People may have heard a group of coyotes that were out hunting and mistakenly thought that these were animals that hunt in packs. However, coyotes seldom form a pack, outside of the family unit and only while the pups are being trained to hunt. Such a group may number over a half-dozen individuals, however, they are the mother, father and the young. When the pups grow to adulthood, they leave the group. Most of the time, there is only one adult male and female; the mother and father. Though people persist in calling this a pack, it isn’t actually a pack, it is a family unit.

On the other hand, wolves often hunt in well-structured packs. Sisters and brothers of the alpha male and alpha female are often members of the pack and unrelated wolves are occasionally accepted. It is common for there to be several females capable of breeding, though it is speculated that pheromones that are produced by the alpha female prevent the other females from ovulating, unless she dies, and the beta female then often takes her place as the breeding alpha female. There is only one breeding female in a wolf pack, so any pups that are present belong to a single wolf.

The whelping of the young is also different. Not only are the wolf parents fiercely protective, displaying a human-like devotion, but every member of the pack takes a role in raising the young. Related by Farley Mowat in his book, “Never Cry Wolf”, a subordinate female, without pups of her own, will even sometimes nurse the alpha’s pups. Also, although the male young may be driven out upon reaching adulthood, often the females are not. This can lead to several generations of animals in the same pack.

Coyotes and wolves sound distinctly different, too. Here are two clips of the sounds they make. The top one is coyotes and the bottom one is wolves. Notice that wolves have deeper voices and distinct howls while coyotes have more of a yipping bark.

Many times, I’ve heard people hearing a coyote and claiming that it was a wolf. It isn’t difficult to tell them apart, just by the sounds they make.

Neither wolves nor coyotes pose a serious threat to people, assuming that the animals are healthy. In fact, both tend to avoid humans when they can. This said wolves tend to be the more aggressive of the two animals and more prone to attack if they perceive the need. Though this is the case, coyotes are curious animals and they are frequently seen in small towns. In some cases, they lose nearly all of their normal fear of man. This makes them dangerous, not so much to man, but to pet cats and dogs. Coyotes often see cats and dogs as potential prey. Although coyotes are much smaller than wolves, few domesticated dogs can best a coyote in a one on one fight. 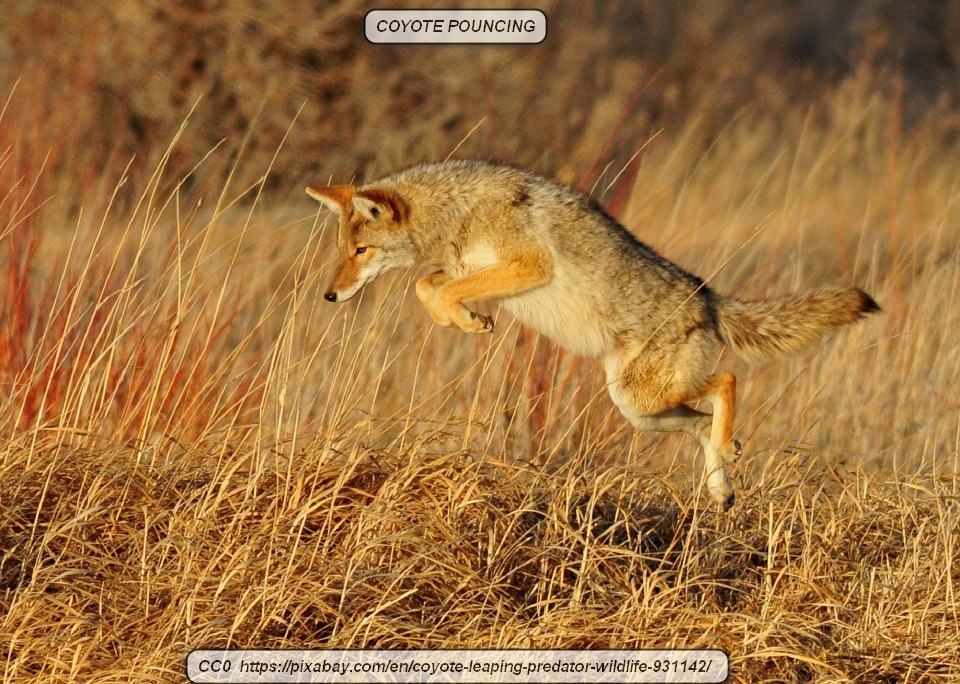 The main food for both coyotes and wolves is small rodents. Both are adept at catching mice, rabbits, hares, voles, squirrels, lemmings and other similar creatures. However, a coyote is most apt to pounce on its prey, rather like a cat or fox does. Their slender bodies and long legs give coyotes an advantage when doing this.

Wolves rely on their greater size, stamina, and speed, and they often run down prey. What is more, a wolf pack will occasionally bring down a large herbivore like a deer or elk, sometimes using a “tag-team” method of hunting that wears out the prey. Coyotes have been observed feeding off such a carcass, but it is likely that another predator made the kill, ate their fill and left. The smaller canines don’t have the combined power that a pack of wolves has.

In fact, coyotes, unless they are extremely hungry, will seldom stand up to other carnivores when it comes to a kill. Wolves have been known to face down a grizzly bear or mountain lion to preserve its meat and meal.

Coyotes will also eat vegetation and fruit, which can make them pests to farmers, though it is likely that they do more good than harm since their primary food is still small rodents that can do substantial damage to crops. Wolves may occasionally eat fruit or vegetation, but this isn’t common. Wolves will kill and eat coyotes if there is an opportunity, however.

At a glance, coyotes and wolves are quite similar. However, they have some great differences that should be noticeable if a person is privileged enough to view both in the wild. These are definitely two different animals, and a little observation will probably be enough to prove it.