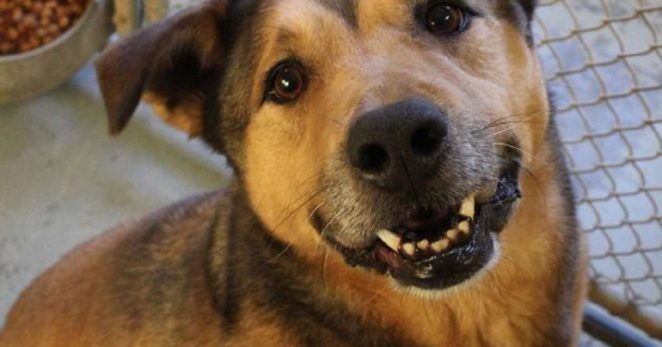 A make German Shepherd dog named Higgins could be called the Iron Dog of the Humane Society of Preble County Ohio after his wait of 6.5 years of being adopted came to an end when thanks to social media, a young man named Brendon Reed read the story that Higgins was on the verge of being put down unless he was adopted soon.

Higgins had been at the Preble County Animal Shelter since 2012 since he was a puppy. Normally German Shepherds are in great demand to be adopted as young puppies since they are very loyal to their loved one who adopt them.

The strike that held Higgins being held back from being adopted by a loving family is that most families that have children want to adopt young puppies instead of adult dogs unless the owner is in need of a watchdog who has a few years of life in him or her like we did when my relatives and myself adopted our late mixed German Shepherd dog Thunder in 1988.

Brendon Reed who is in his early 20s was impressed with the unconditional love that Higgins showed him when Higgins was being shopped by the officials of the animal shelter in a a way to have Higgins find a new home with someone who would not mind having what I call a veteran dog to share his life with.

Higgins adoption story reminds of the saying of the late baseball star Yogi Berra which is “It ain’t over till it’s over.” Congratulations Higgins on being adopted by Brendon. May the relationship between the two of you prosper.