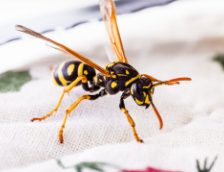 On an attempt to cross the stream, to her hive on the other side, Burnella, the wasp was blinded by a sudden ray of sunlight, reflecting off a discarded glass jar lying in the mud at the side of the river. temporarily blinded, she began to spiral downward in ever-diminishing circles.

Instantly, she felt a bolt of pain shoot through her body as her left-wing struck the willow tree in her path. Straight down Burnella fell, “No way of catching a stray, spring thermal updraft in this ridiculous state, she gasped”, as she plopped down into the sticky mud. By the angle of it, her wing seemed badly dislocated. From the corner of her huge eye, she noticed Herman, the toad.

“Hello, hello, what have we here,?” Herman asked as he cautiously hopped a bit closer. All toads know an ancient trick of turning a wasp into a slippery, slime coated meal, dodging their sharp ends deftly. Preparing the spit-ball chaser for his waspy breakfast, she had not managed to stay alive this long by not studying her enemies very meticulously. Far too many wasps had chanced it too close to toads, not heeding the warnings of their elders. If she was to survive this imminent attack, she had better do it now! she thought.

“Wait, Herman, just wait up a bit, she blurted out. The alarmed pitch in her voice reached Herman’s ears. “You won’t feel a thing, my dear, it will all be over in a flash, I promise. Herman lied. “Remember that day you saw me hovering around your spawn bubble,? I could have snuck away with one of your juicy jelly babes while you were soaking up the morning sun?” she said, the distress in her voice, was unmistakable. “Oh, very well,” he said, “what do you want?”.

“I’m a parent too, and I have to get to the other side to see to the kids.” And your, ahem! point is,?” Herman wanted to know. “Would you kindly carry me on your back, to the other side?” I have no other way of getting there”, she replied. “Huh!, on my back, you say, but can I trust you, Burnella, your venom can kill a frog like me, you know?  Herman said nervously. “Sure you can, I’m entirely at your mercy, surely you can see that Hermy? she replied.

“I suppose you are right, hop on” Herman answered. Burnella cautiously climbed on to his wart-covered back, and soon they were off, streaking across the fast-flowing river. Holding on, tightly, as he swam, keeping a sharp look-out for a hungry catfish. “This is incredible, Burnella,” he said, “Who would believe it, arch enemies working together in peace?” “You see, Hermy, all we need in this life is a little trust.”

As Herman hopped out of the water on the other side, he was about to say goodbye when he felt the sharp hypodermic-like pain in the nape of his neck.” The pain was excruciating and his voice faltered as he spoke, “But Burnella, I don’t understand”. She replied:“Hush, Herman, lie still, don’t fight the poison…”  Herman could feel life rapidly ooze out of his body as his heart started to slow down. “But why kill me, I was being kind to you, why?  he asked as his breath grew shallower. hopping close to his ear, Bernella whispered:” I could not help it, Herman, it’s in my nature…”