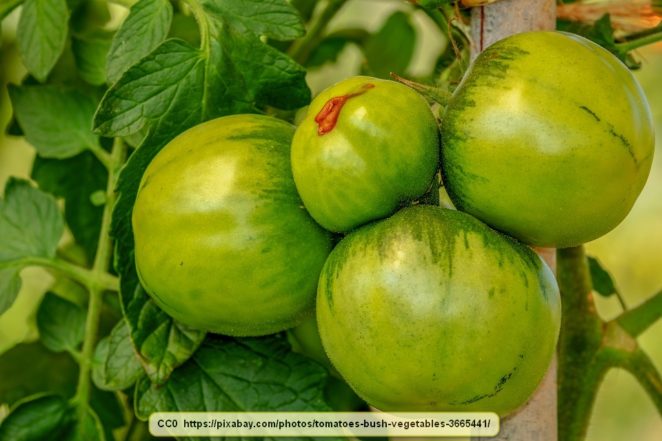 When the storm warnings went up in Montana on Friday, September 27, I knew that I was going to need to harvest. My biggest concerns were my tomatoes, zucchinis, and eggplants. None are cold-hardy and snow kills the plants. There are positives for a forced early harvest, though.

This year, I only planted 7 tomato plants, 2 eggplants, and four zucchini plants. Three of the tomatoes were cherry or pear tomatoes, so only four of the plants were the type that produces salad tomatoes or slicing tomatoes. All of this is less than a quarter of what I normally plant.

Also unusual, I was so busy with the church flowerbeds this year, I quite neglected my tiny garden, except for keeping it watered. I didn’t mulch around the plants and I did no weeding after early July. Three of the tomato plants were heavily overgrown by my catnip patch, to the point that it was even difficult to see the tomato plants.

I naturally expected to have a small harvest. I definitely didn’t grow the tomatoes properly. That is entirely on me. I didn’t take the time.

I knew that a couple of the plants had a lot of small tomatoes on them, but when I started into full harvest mode, I was stunned. I filled a large wheelbarrow with green tomatoes, plus about 20 ripe ones that had been hidden from view. I’d judge the tomato harvest to be at least 50-70 pounds of tomatoes.

There were also a half dozen large zucchinis and a few smaller ones, four large cucumbers, and a half-dozen eggplants. I didn’t even get to harvest my green beans. By the time the tomatoes were harvested, my hands were numb with the cold. These aren’t tiny tomatoes, either. Well, a few of them are, but most of the smallest tomatoes were left on the vine. Most of these are the size that is commonly sold at the store or larger.

My birthday is over a week away, but this has the distinct feeling of being an early birthday gift. Since I honestly can’t attribute it to anything that I did, that would mean that it was a gift from God and I’m quite thankful for it. Regardless, I need to take some time today to spread the tomatoes out so they can ripen.

It strikes me that there are many people who honestly believe that it is too expensive to grow a garden or too labor-intensive. However, I probably spent less than $20 on the garden this year, counting everything, and I sure didn’t put much work into it, yet if I bought the amount of tomatoes I harvested, at the price the store charges, I’d pay between $150 and $210! That is just from the tomatoes and not counting anything else that came out of the garden. The best part is that even though they won’t be vine-ripened, they will still taste better than those that come from the store, once they turn ripe.