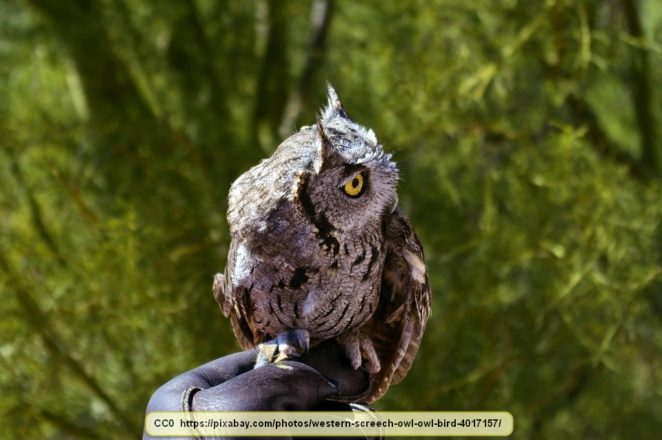 It is easy to get tricked into thinking of owls as large birds of prey. However, not all of them are large. Screech owls don’t get very big, though they also aren’t tiny. The image gives a great idea of the size of the adult birds. Yes, it is perched on a person’s gloved hand.

There are actually two species of screech owls in North America; the Western Screech Owl (Megascops kennicottii) and the Eastern Screech Owl. However, there isn’t a great deal that is different between them, except their range. Both of them occur, overwinter, and breed in Montana.

Screech owls aren’t much larger than an American Robin, though they are much stockier in build. They have short tails and ear tufts. The wingspan is up to about two feet, which is small compared to many of the larger owls. An adult can also weigh up to nearly three-quarters of a pound.

Screech owls have barred and speckled coloration, with gray, brown, and rufous coloring blending to make the bird rather difficult to see. This is even more so since screech owls, like most other owls, are nocturnal hunters. They will often sit in the entrance to their nests during the day, though, and people rarely see them, even when they are in plain sight.

Screech owls love the forests, particularly those with deciduous trees, and they live up to around 6,000 feet. Unlike most owls, screech owls are also quite tolerant of humans. They can be found around parks, in suburbs, and near houses, particularly if there are deciduous trees nearby. On occasion, they will even use nest boxes that are put out for them.

They live as far south the desert southwest and will often make nests high up in a saguaro cactus. They also live as far north as Alaska.

These birds often take prey that is larger than the owl, for instance, rabbits and hares. However, they also eat insects, bats, rodents, and even earthworms.

Despite its size, screech owls are formidable predators.