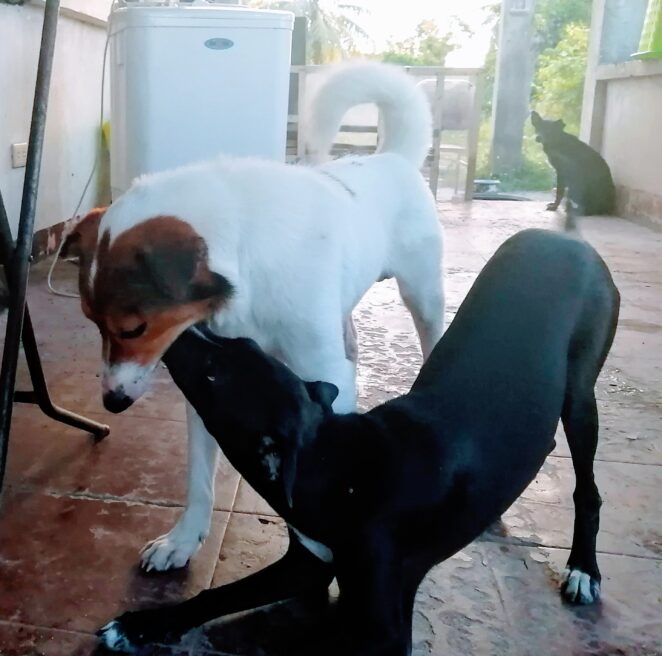 Here in the Philippines, there is no law against stray dogs. So, you will see dogs almost on every street.  Some tend to chase some vehicles, especially the noisy open-muffler motorbikes. I think they hate the noise.We had a dog that passed away last year. He was about 8 years old. But before he passed away, he brought home a female dog that was pregnant (the one sitting on the background). Unfortunately, since we don’t stay regularly in our house, we were not able to take care of the pups and they died. However, the female dog stayed. I don’t know who’s her original owner.

One evening last December, we found three pups cuddled on our porch. We were not home for two or three days before that. One of the pups was already a rigid corpse. He probably died earlier that day. The two survivors are still around.

Then, one early morning in March, I think, I woke up with the sound of a whining pup outside our bedroom window. It was raining heavily. When I went out to see, I saw a black puppy taking shelter from the rain. But he did not leave the premise even after the rain has stopped. He is the black one with white ‘socks’ in the photo. Until now, I haven’t named him.

The white big dog, in the photo, has been visiting the house for months already. He was courting the female dog. But since last month he decided to stay. I thought he was our neighbor’s dog, but when I asked them, they said no.

At the moment, we have five dog refugees and three surviving pups. Yeah, the female dog had a litter a week ago. And it seems she tends to lose her pups. :(.

Well… at least we have some dogs guarding the house whenever we are not around.

BTW, I haven’t named most of them. I named one that may have some chihuahua blood in him. The big white one in the photo looks like an offspring of a good breed as well, but I’m not that good in identifying the breed of dogs.

The rest are clearly ‘Aspin’ or ‘Asong Pinoy’ – the name for local breeds.