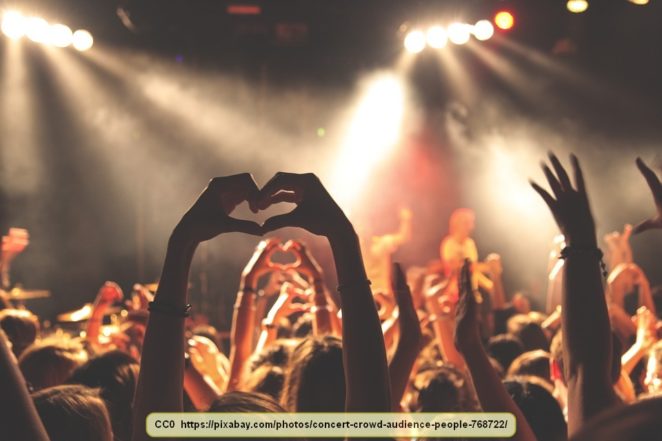 I saw an interesting poll question today on another site and wanted to repeat the question here; have you ever been to a concert?

That includes any sort of organized concert, put on by any professional musical artist or group. The only exception would be that it wouldn’t include a ‘concert in the park’ event or a sidewalk concert put on by an amateur. It has to be a regular concert.

The reason this interests me is that I came close to saying no. I’ve never lived in a place that is large enough to have concerts and prefer not to travel to see one. Oh, I’d travel to see Home Free, Pentatonix, or Peter Hollens in concert, if I could afford it, but the point is that I’d be highly selective. Yet, my wife and I did go to a concert.

It was several decades ago and we were living in a town in S. Oregon. The town was on a major N-S route through the state, but it wasn’t an interstate route. Celebrities occasionally came through, but it was simply on the way to somewhere else.

Anyway, they had a contest that day. If the 10th caller could identify the song and the performer or group on the next song played, they would win two tickets and round trip bus transportation to a concert. I was barely paying attention to any of that, naturally, until the song started. I knew what it was immediately and I knew who performed it.

Then he said, “Congratulations! You are the 10th caller and you just won tickets and transportation for two to see Jan and Dean in concert!”

The concert was low-key and rather than in an auditorium, it was held at a fairgrounds, to my delight. The highlight of the concert needs a sort of explanation. At the height of their fame, Dean was in a serious car accident that left him with similar brain damage a person has when they suffer a major stroke. He went in for therapy but was never to fully recover. Concerts after that time featured Jan and a fill-in for Dean, though when he was recovered enough, Dean traveled with the concert.

The highlight of the concert was when Jan announced the song “Dead Man’s Curve” and Dean walked on stage and actually sang the song with Jan! You could tell that he had trouble with half his body and his voice wasn’t like it had been when he was healthy, but it was an inspiration and he got a standing ovation.

So yes, I’ve been to a concert.