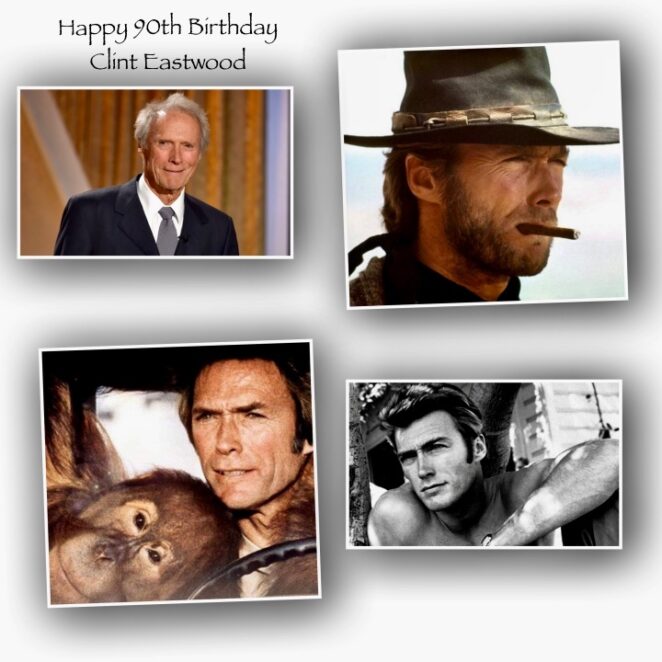 Had to share this with you today. A classic actor and director, Clint Eastwood turns 90 years old today. He is still making movies. Over 80 movies he acted in and some he also directed.

He will not verify how many children he has, but records show he has at least eight children, with five mothers.

In his younger days, Eastwood held a number of jobs, including lifeguard, paper carrier, grocery clerk, forest firefighter, and golf caddy. He was a lifeguard in the US Army in the 1950’s.

Eastwood composed the film scores of Mystic River, Million Dollar Baby, Flags of Our Fathers, Grace is Gone, Changeling, Hereafter, J. Edgar, and the original piano compositions for In the Line of Fire. He wrote and performed the song heard over the credits of Gran Torino and also co-wrote “Why Should I Care” with Carole Bayer Sager, a song recorded in 1999 by Diana Krall.

He has been outspoken about politics as well. Was once a Republican but now a Democrat.

Eastwood has held a lifelong distaste for tobacco and tobacco companies, and only smokes when required to do so by a film role. He has also been conscious of his health and fitness since he was a teenager, and practices healthy eating and daily meditation.

Maybe he has found the secret to longevity. Healthy eating and meditation. Now you  know the rest of the story about this incredible actor, director, politician and musician.