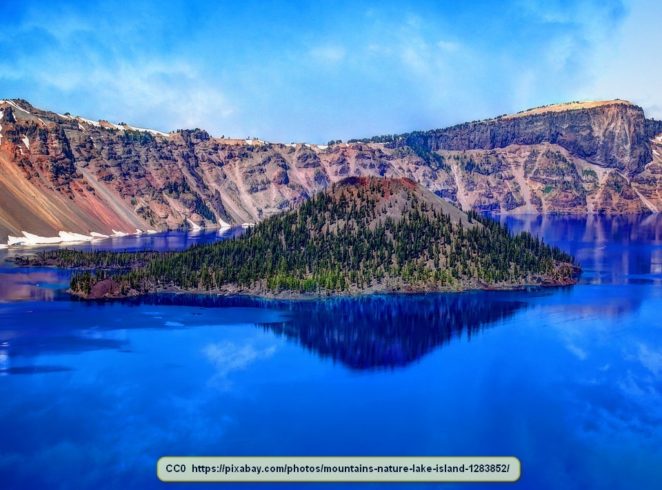 A number of people have asked me why Crater Lake is so deep blue. It is often described as being sapphire blue. There is a reason for it, and it has to do with a property of water, mostly.

It should be mentioned that water isn’t actually colorless, though a glassful of water might appear that way. Pure water has a slight bluish tint to it. This has nothing to do with why Crater Lake is so dark blue, but it is worth mentioning.

The visible spectrum of light ranges from red to blue. We use the mnemonic, Roy G Biv to remember the colors of the rainbow; red, orange, yellow, green, blue, indigo, and violet. Each of these colors has a different bandwidth. Red has a long wavelength and is relatively low energy. Blue has a short wavelength and is more energetic.

Pure water has a property of absorbing the wavelength and energy from light. Since red is the lowest energy color, it is absorbed first, then other colors are absorbed, from low energy toward high energy.

In the case of Crater Lake, the water is so pure and deep that all the colors are absorbed up to nearly the bandwidth of indigo. So what we see when we look at it is mostly a combination of what’s left; some blue, indigo, and violet. We see this as sapphire blue, the color of Crater Lake. Pictures of the lake don’t do it justice, though. You really need to see the lake for yourself to see how blue it looks.

Incidentally, lakes that appear green usually do so because of a large amount of algae in the water rather than the property of water that absorbs energy and color wavelengths. The water in Crater Lake is incredibly pure and contains very little algae.