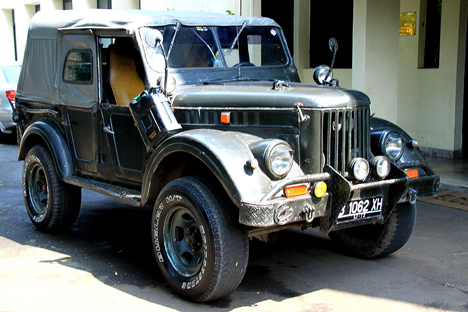 Doc managed to convince me to post the “Fun Old” challenge he had begun. Triggered to recall the various car-related occasion, I tried to recall the earliest memories about the car I knew, and the effort brought my memories to GAZ 69 which in the 60s was used as the car of all commanders of the Indonesian Armed Forces.

I can’t remember my age at that time when my father used the official vehicle, but it must have been between 2 and 3.5 years because before and after that age we lived in another sub-district in Jakarta.  Three incidents that I can remember about the car:

– First, when I didn’t know why I cried continuously for a long time since I woke up in the morning until my father and mother and my elder sister tried to cheer me up by took me away with the GAZ. I remember how I kept crying in the car, sometimes while holding the handle on the dashboard while nodding my head  (maybe that was the beginning I loved hard rock and heavy metal with its headbang) until my mother was overwhelmed. My father finally said, “If you keep crying, we’ll just go home. We won’t go to uncle’s house.” and because I keep crying, dad really takes me home. Strangely I stopped crying when I got home.

– Secondly, when I asked to sit on my father’s lap while he was driving and because I kept insisting, my father finally put me in his lap, and then I joined in to drive by holding the steering wheel very happily.

– Third, every time my father washed the car in the morning, I had to be in the driver’s seat to play as if I were running the car.

A little bit about how GAZ-69 entered Indonesia, this vehicle passed after the test by defeated four competitors from the UK (Austin Gipsy and Land Rover) and German cars (DKW and Steyr Daimler Puch). The competition was conducted through a cruising power battle that was held by ABRI as far as 4,000 km through a stretch of sand and volcanic area on Java for 50 days.

As written by Mikhail Tsyganov (RBTH, 2014), the cars were asked to go around Java twice. This competition is called by one of the newspapers in Indonesia as the biggest and heaviest trial for European cars that have ever existed in Indonesia.

These cars drive around in the black volcanic sand of the coast of Java, climb the forest around the volcano, and are often not allowed to stop other than refueling, adding lubricant, or changing drivers.

At the last test session, the cars were asked to cross the river in the suburbs of Bandung, West Java. During this crossing test, the last remaining rival of GAZ-69, Land Rover, broke down in the middle of the river and even had to be withdrawn by GAZ-69.

Here are two videos on how GAZ 69 is currently used as an offroad vehicle.

I hope you enjoy!