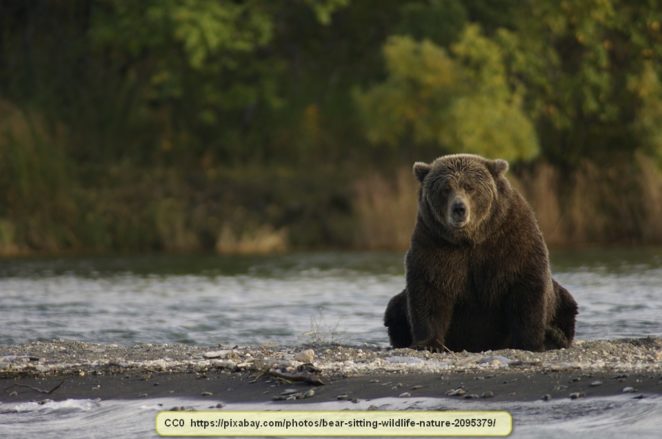 When we moved into this house six years ago, there was a vacant lot next door. At the back of that lot was what looked like a dead apple tree. Closer examination revealed that it still had two live leaves, though the tree had been badly neglected for quite a few years and was close to being dead.

I started watering the tree and gradually got rid of the dead part of the tree. That was easily 90% of the tree, by the time all was said and done. The tree started to grow again and two years ago, it even produced fruit. There is now a house on that lot and our neighbor diligently took care of the apple tree. It responded by being packed with apples this year. This has been a very good year for apples.

What does that have to do with bears? I’m glad you asked and I’m getting to that part.

Yesterday evening, our neighbor came over with two plastic bags full of apples; probably 40 pounds worth, altogether. That’s great because I can make that into apple preserves. However, I didn’t expect it. Then John (the neighbor) explained.

He’d gone out yesterday morning and every branch on the apple tree above four feet was broken beyond repair; snapped off as if by weight. There aren’t many things that can cause that. It was breezy, but there were no abnormal winds and no other damage. Deer love apples but don’t do that sort of damage to a tree. That left only one probability; black bears.

Black bears are tremendously fond of sweets, particularly such things as apples or pears. This time of year, they are also trying to eat as much high-energy food, like apples, that they can get. They need to put on as much weight as possible before they take their winter slumber. Bears will also often shred a fruit tree to get to the fruit, particularly if they can’t climb it. This tree was still recovering from years of neglect so although it was packed with apples, it was more like a bush than a tree. There was literally nothing to climb.

As if to confirm the theory that it was bear damage, word came in that a black bear was spotted a few hundred yards from our place four nights ago. There were three sightings in a tiny town 8 miles south of here, too. Further, there have been sightings of black bears in four other towns larger than ours but within 70 miles, plus one sighting of a grizzly in one of those towns.

Bears aren’t afraid of people, but they tend to stay away from people when they can if the bear is healthy. They seem to instinctively know when a winter is going to be especially harsh, long, or snowy, though. If they sense impending bad weather, they forego the disdain for humans and go full-bore on the pursuit of food to put on weight as fast as possible.

Thus, I’m not especially worried that a bear took out that little apple tree. A new one will be planted next year. The neighbor stated as much. However, the damage indicates that we may be in for an especially severe and brutal winter. To be honest, that isn’t something that I look forward to.

Still, I’m reminded of a saying; “Worrying about the snow does nothing. The same amount of snow falls, you just spend more time worrying about it.”