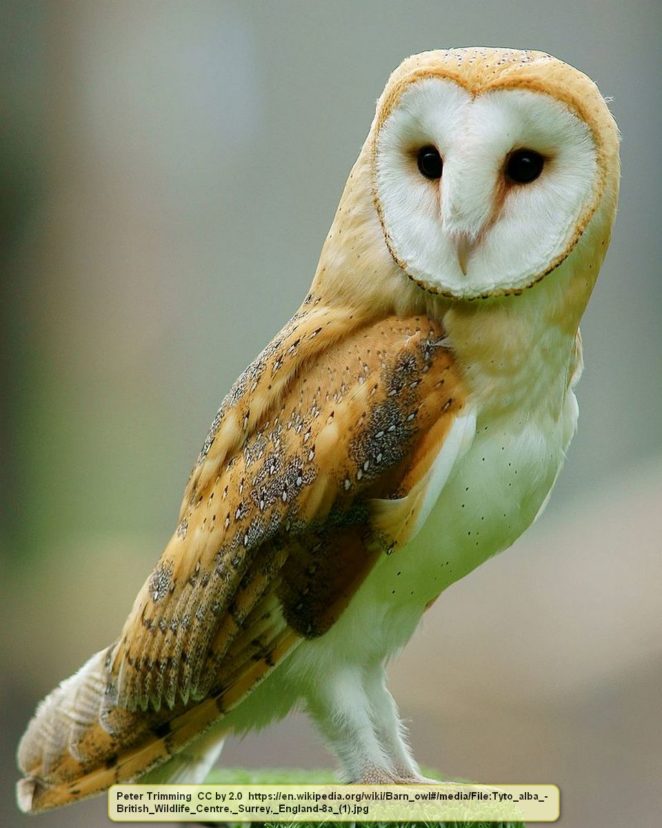 We’ve recently taken a look at two of the most common owls in North America; the screech owl and the great horned owl. It might be interesting to look at an owl that is quite a bit different than either of these, in a number of ways. That is the barn owl.

Although screech owls and great horned owls are common, the most common owl in the world and the second most common bird in the world is the barn owl (Tyto alba). These birds are found almost everywhere except in deserts and in the polar regions. There are almost 30 subspecies and this bird is found in Europe, Asia, the UK, Africa, North America, South America, Central America, Australia, and in some of the Pacific Islands.

Barn owls are medium-sized owls that grow to a length of almost a foot and a half, with a wingspan of between three and three and a half feet.

The coloration can be quite variable, but is often brownish above and pale on the belly, sometimes with some barring or spots. The scientific name means “white owl”, but not all of them are white. One of the main distinguishing traits, though, is that barn owls have a disk-shaped, round, or heart-shaped face.

Nests might be built in hollow trees, cliff faces, rock crevices, or even in buildings, such as barns, as the common name implies. This is a species that mates for life, which isn’t tremendously common among birds.

The barn owl diet has been studied more than that of any other kind of owl. This is partly because the bird eats prey and what can’t be digested is regurgitated in a pellet. The pellets, containing bones, fur, and feathers, can be identified, giving an excellent idea of what the birds have been eating. Mostly, this consists of small rodents like voles, mice, birds, and lizards. This is also one of the few owls known to hunt during both the day and at night. They are also common near human habitations.

The shape of the face aids with hunting as the ears are located beneath the feathers of the disk, with one being a little higher than the other. This allows barn owls to zero in on prey even in total darkness, making them deadly and accurate predators.

These owls are capable of living 20 years or longer, but in the wild, the lifespan is about half of this or less.

If you’ve ever seen an owl in the wild, there is an excellent chance that this is the type that you saw.