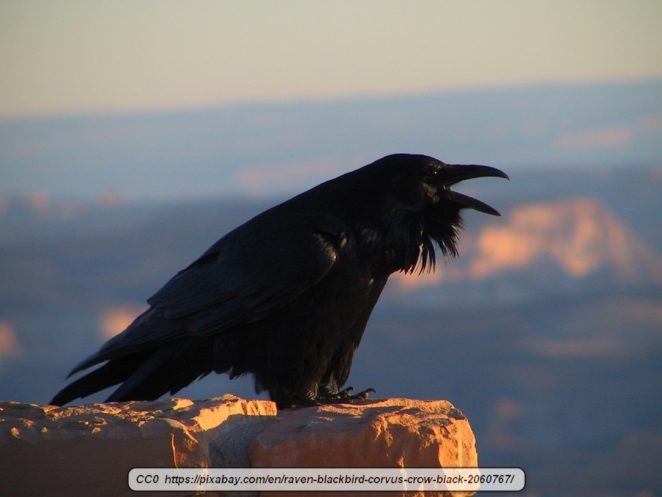 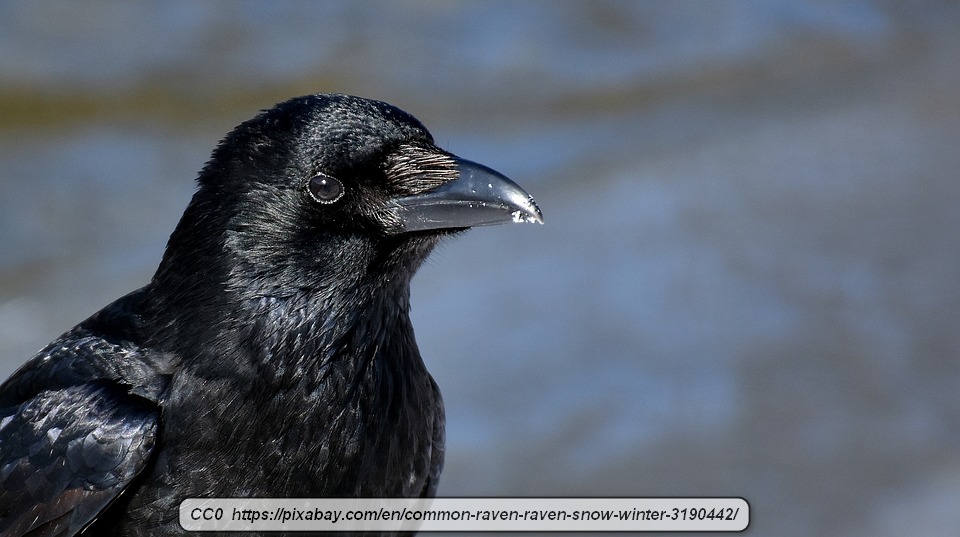 Ravens are impressive birds with a global range through most of the north. Though people in the southern latitudes may have never seen them, people who live in the north probably have. It isn’t surprising that Edgar Allen Poe wrote “The Raven”, considering the almost mystical feeling the bird instills. 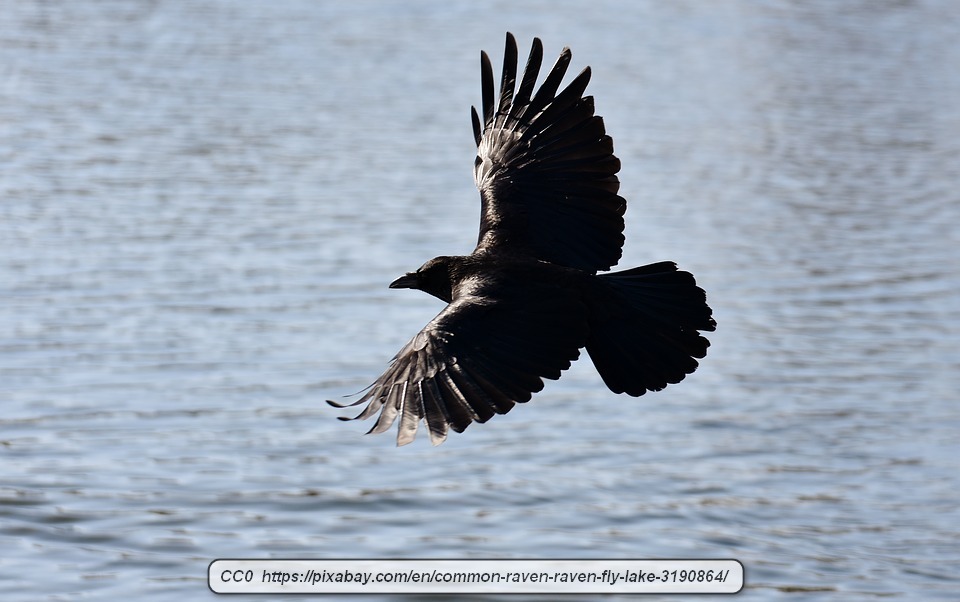 The raven (Corvus corax) is the largest member of the crow family and they are often mistaken for crows where their range overlaps that of the common crow. Crows and ravens are different birds, but both are large, black and they both have large, stout beaks. They have many of the same traits, too, and they have the same diet. Both are considered to be among the most intelligent birds.

There are also differences between the two birds, though. Ravens are larger, often exceeding two feet from the tip of the tail to the tip of the beak. Crows are seldom over a foot and a half in length. Crows can weigh about a pound while ravens often weigh over four and a half pounds.

Crows have a wingspan of about three feet, while it isn’t unusual for a raven’s wing spread to be around four and a half feet. Crows live for about eight years while ravens can live three times longer. There are claims of ravens living 40 years or more.

Ravens have a ‘beard’ of feathers under the chin that crows lack and crows are much noisier and nervous birds.

One of the easiest to detect differences, though, is in the tail. Crows have a straighter shaped tail. Ravens have a wedge-shaped tail. This can be seen when the birds are in flight, especially. 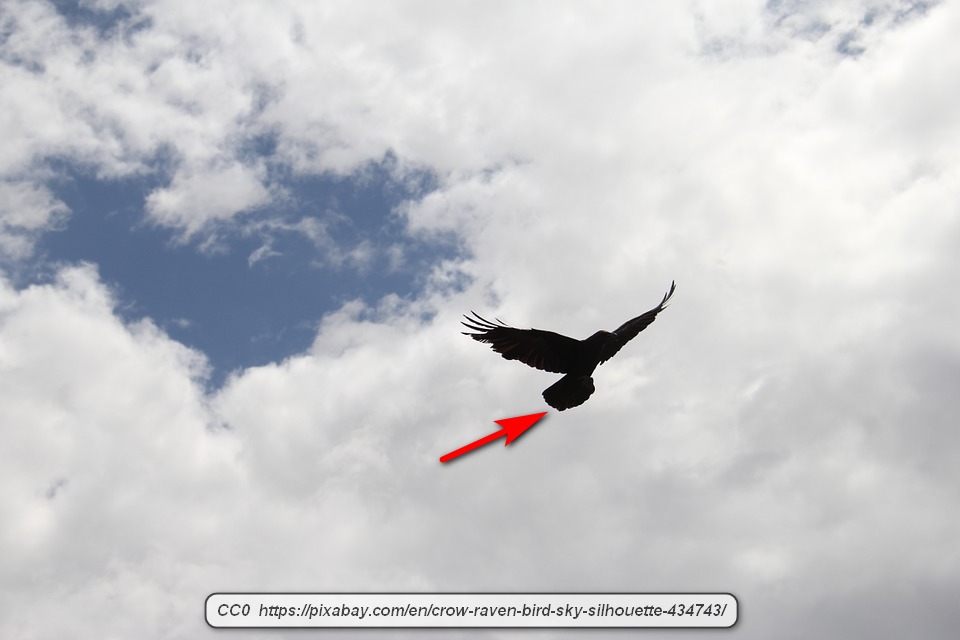 Notice the wedge-shaped tail, the sign that this is a raven and not a crow.

More damage tends to be done by crows than by ravens, especially since crows are normally more social and love eating corn and other food crops.

Ravens are found throughout the northern hemisphere, which makes them the most widespread member of the crow family. They also live in a wide range of habitats; mountains, valleys, plains and prairies and practically any other type of habitat that has food for them to eat. They are even seen in towns and cities, partly because of the variability of their diet.

Ravens are well-known for eating carrion. They are capable hunters, but would much rather make an easy meal of road-kill, dead animals of the forest, dead fish or even what is left of deer, elk or other large animals that have been killed by wolves, bears or mountain lions. They’ll also eat food scraps that are left behind by people.

They are important in forests because they will clean up dead and even rancid meat, in much the same way that vultures, storks, and buzzards do in open country. They will occasionally also eat fruit, nuts, seeds, berries, amphibians, reptiles and insects. In some areas, they’ve been observed catching, killing and eating mice and squirrels.

This large bird uses its intelligence when hunting, too. While they aren’t social birds like crows are, they will sometimes work in pairs, with one raven acting as a distraction while the other makes the kill. They are also smart enough to know that the sound of a gunshot often means that there will be carrion for them to eat.

They’ve been seen carrying snails or shellfish into the air to drop them on a hard surface, in order to break them open so they can get to the meat inside. This shows the ability to use tools and some reasoning ability.

They seem to be fond of shiny objects, too. They will often pick up something that is shiny and use it to line their nest.

Although mynah birds, cockatoos, and parrots are the most known for mimicking other birds and people-speech, Ravens are particularly good at it. If ravens are kept as pets, they can quickly pick up words and repeat them. They can also mimic sounds, like that of gunshots. In the wild, they often mimic the calls of other birds. 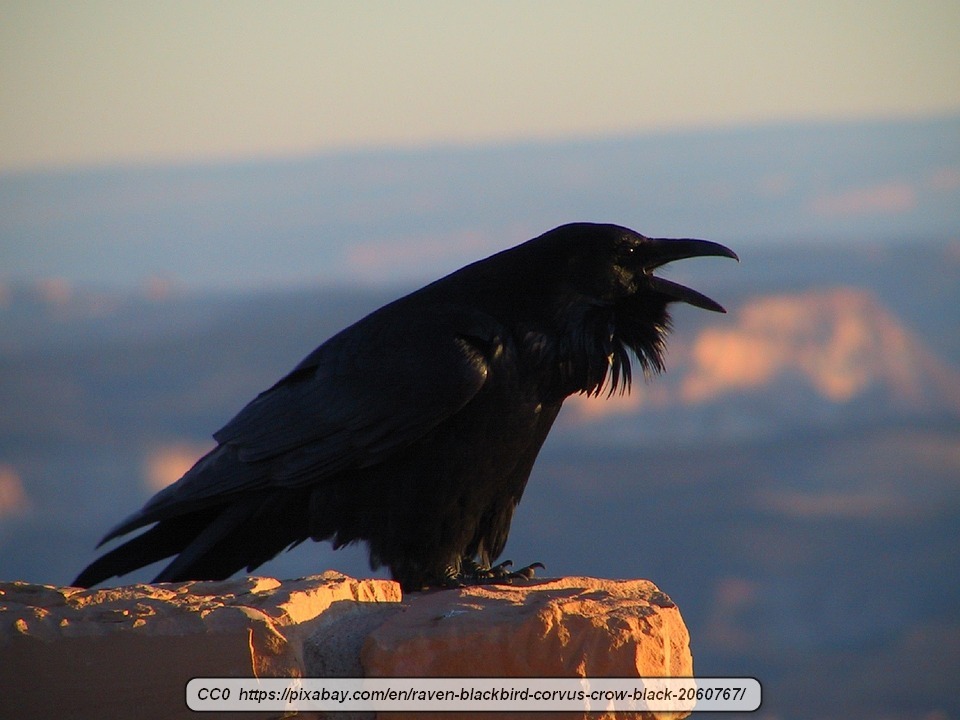 This is among the birds that usually mate for life, but they are usually about three years old when this occurs. They aggressively protect their territories from other ravens and build large, deep nests that they sometimes line with mud, lichens, fur from animals and feathers.

Normally, three to six eggs are laid and these hatch in about three weeks. The female incubates the eggs and rears the young, though the male protects the young birds.

Ravens are interesting birds and they are common. They are quite intelligent, too. There are enough of them that they occasionally cause damage and people have gone to great lengths to get rid of them. Will those people ever be successful in getting rid of the ravens? Quote the raven, “Nevermore.”