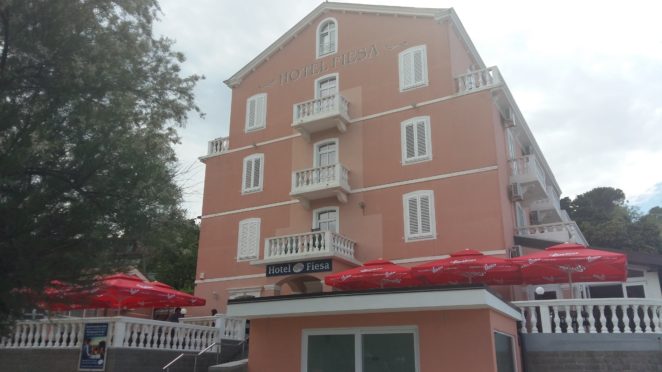 Fiesa is a small tourist settlement on the Slovenian coast, which lies between Piran on one side and Strunjan on the other side. In addition to the two beautiful hotels, there is a large and modern equipped car camp.

A natural monument is the inscription Jezera in Fiesa. The lakes lying just off the coast were covered with reed. Both lakes have a total area of about 2 ha. They were created as a result of the excavation of clay for the needs of the former brick. A small lake, located at an altitude of about 10 mnm below the slopes, is freshwater and deep to 6.5 m. The larger is deeper, reaching a depth of up to 9 m. Despite the immediate vicinity of the sea due to clay, the groundwater did not penetrate the lake.

Since 1963, there is a larger lake with a channel, in particular to prevent the development of mosquito-related mosquitoes. Because of the special natural conditions, the lakes and the surroundings have become an interesting habitat for various plant and animal species, and in particular around twenty rare and endangered species of dragonflies. In 1989, lakes were included in the inventory of the most important natural heritage in Slovenia and declared a “natural monument” by a municipal decree.