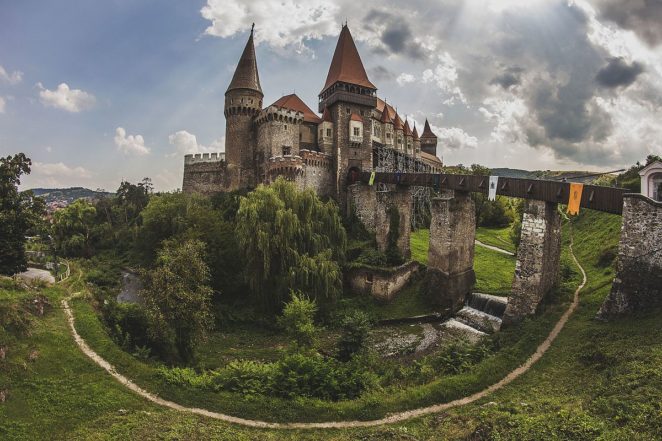 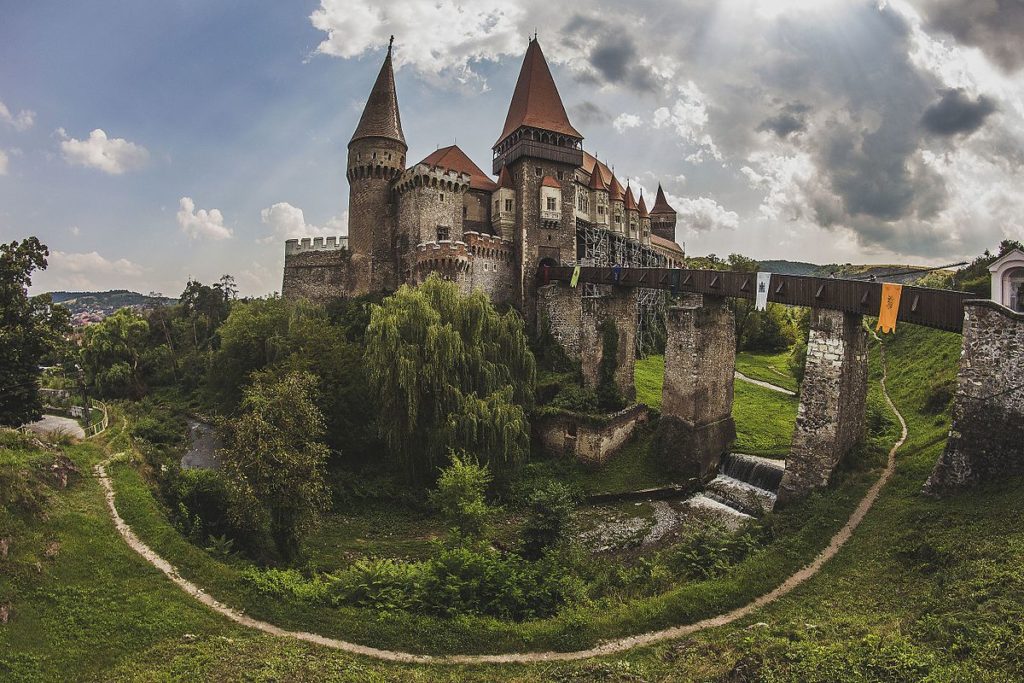 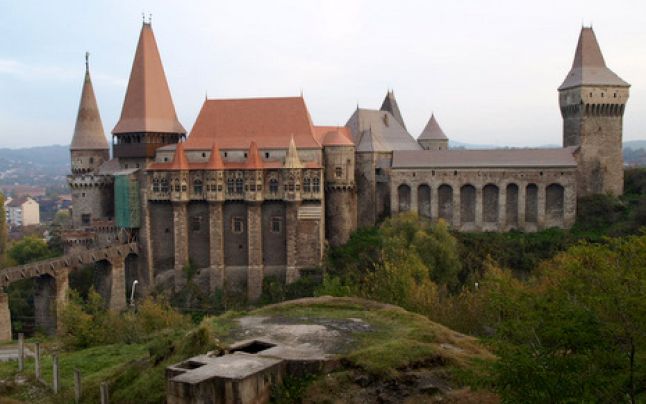 The Corvin Castle or Hunyadi Castle is one of the most important tourist attractions in Romania, with a special Gothic architecture. The Corvinesti Castle in Hunedoara is one of the most valuable monuments of medieval architecture in Romania. It has been certified in documents since the beginning of the 14th century. In 1409 Sigismund of Luxembourg, he gave this castle all around him that surrounds Prince Voicu as proof of gratitude for his acts of courage.

Iancu de Hunedoara, the son of Voicu, makes radical changes by building a massive mobile tower and a defense wall transforming the old castle into a military fortress that can withstand the siege of a large army.

The Corvin Castle (Huniazilor) is ranked second in the most frightening buildings in the world, maybe its past or Gothic architecture gives it a scary air. 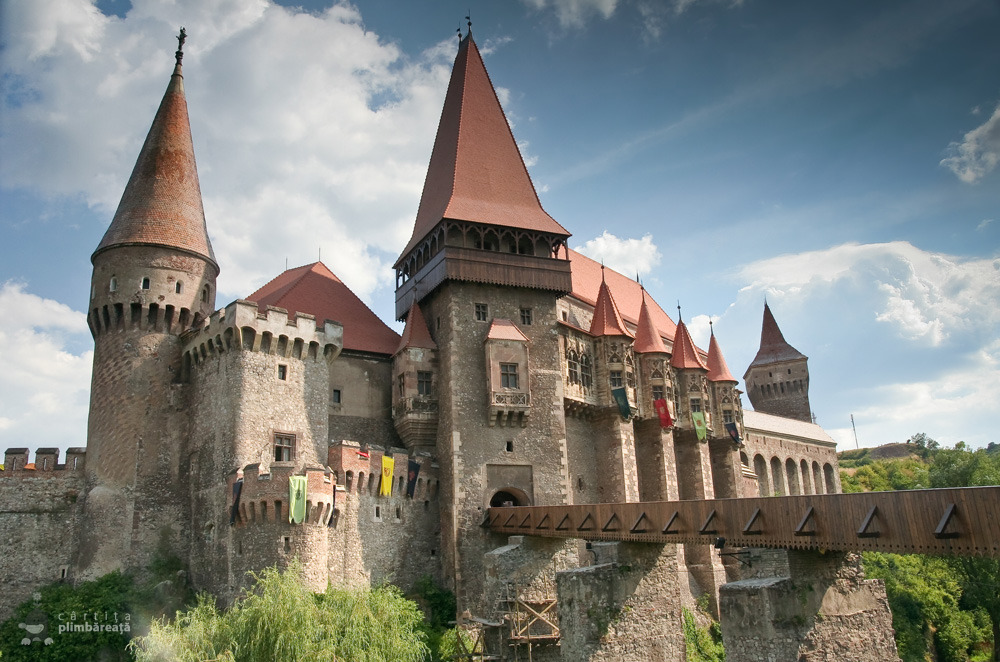 The castle also has its own legend that says: “The Corvinus Basin carries a inscription with a golden ring in the beak. John of Hunedoara was the unknown son of Sigismud de Luxenbourg, when he was king of Hungary with a beautiful woman called Elizabeth, who lived in the Land of Hateg, hoping to wash his sins and shame, the king married one of his sons with Elisabeth and gave him a gift, a gold ring for the baby to be born. the woman is traveling, Eisabeth is forgotten on a flag and stolen from a raven, drawn by the shine of the precious metal. John of Hunedoara, a child then, takes a bow and pierces the raven in flight, then recovers the ring. the name of the family comes from Latin, where the word “Corvus” means “Corb” and represents wisdom and longevity “. 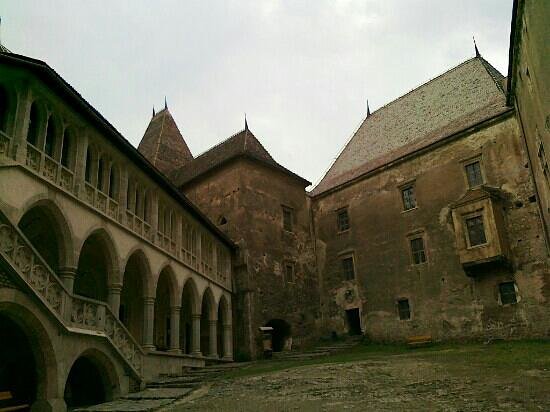 John of Hunedoara dies on August 11, 1456, shortly after his armies defeated the army of Sultan Mehmet the second Conqueror, who attacked Belgrade. His castle remained in the care of his wife, Elisabeth Szilagyi, who in the following years stopped the castle. He resumed them, the historians argue, after his son Matia ascended to the throne of Hungary, only 15 years in 1458. With the help of Italian craftsmen, he continued the expansion of the castle in a Renaissance style. Several rooms are painted and the Matia Willa is renovated, and the Corvinus blazes are set in place. Many of the decorations have not been preserved until now, but a mysterious fresco can be seen today on the arch of Matia’s wing floor of the castle. Historians have tried to explain its significance.

In the autumn of 1784, the Corvinus Castle became a place of refuge for the families of the nobles in the Haţeg Land and the Strei and Mureş valleys, endangered by the rebels led by Horea, Closca and Crişan. According to historical documents, thousands of people have been barricaded in the castle for fear of the rebels. According to a testimony that belonged to the nobleman who managed the castle in 1784, 3,000 people came to take shelter. 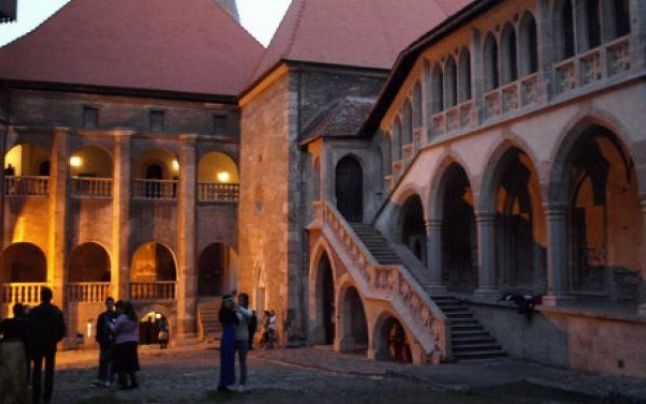 There is a legend that Vlad the Impaler was kept in the prison of the Corvin Castle for seven years. The legend has perpetuated over time,….

According to the Hunedorean historian Ioan Bodochi, the association of the Hunedoara castle with a haunted place comes from both the Romanian people’s beliefs, the immortal spirits and the legends of the Hunedoara castle, a place with a tumultuous past. A horrible tale left in the history of the castle is the punishment of Ana, the noble wife Ioan Torok, who mastered at the end of the sixteenth century Corvinus Castle. “The woman was accused of cheating her husband and executed. According to the legend, her death took place in the courtyard of the Castle. He was beaten in the head, “John Bodochi said. The historian claims that the story of Count Dracula, written by Bram Stoker at the end of the 19th century, contributed to the popularity of the castle. The stories about the castle in Hunedoara, which had been the home of evil spirits, began to grow in less than a decade, when the monumentally received the visit of several “ghost hunters” who popularized their legends creepy.

Archaeologists have discovered in the immediate vicinity of the Corvin Castle, on Sânpetru Hill, traces of settlements for more than three millennia, and excavations by specialists in the past decades and early 2000s, in the castle garden and the Treasure Hill, the NW of the city, led to the discovery of an ancient cemetery, with 30 deposits in which there were the remains of over 50 dead, most of them children. The area of the present castle was of strategic importance to the Dacians and then to the Romans. “There was an important Dacian center on Sânpetru Hill, around which other communities were pivotal. Given the richness and necessity of protecting the rich iron ores, the discovery of Dacian fortresses in the area is also expected. The end of living on Sânpetru Hill and the ending of practicing the sacred rituals in the Garden of the Castle were most likely due to the Dacian-Roman wars and the installation of Roman troops in the area. The Roman construction on Sânpetru Hill and the inventory found in it are conclusive proofs of the installation of Roman troops there, as they noticed the strategic importance of the plateau in the Hunedoara depression “, reads the Dacian Vestiges from Hunedoara. 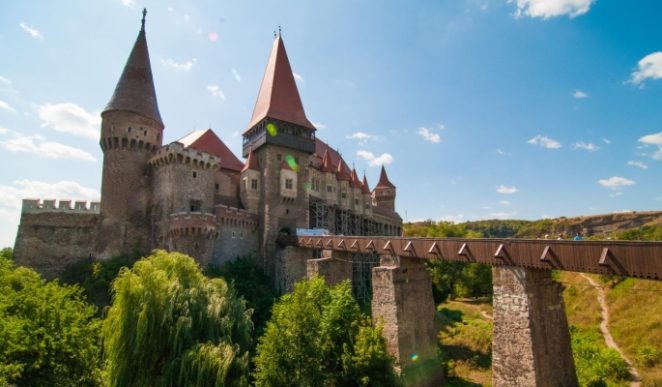