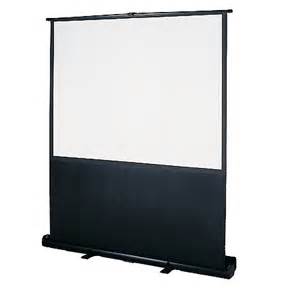 In the past two years, I have seen an explosion of projectors and projection as a capability within and for computers and tablets, phones. Touchjet offers a projector that turns any surface around you into a touch screen, which allows you to interact with webinars and work with others online. Dos Owls have a great projector that offers (Odin) the integration of an Android Device and a projector all in one. All of them provide interesting capabilities and functionality as you dive into the world of projectors.

Now, all that said I am not doing a review or adding to my SCRaaS posts of the past few days. What I wanted to talk about today was, in fact, the screen. I have three total screens in my house, one because it was my father’s and the other two I purchased many years ago. One of the two I bought is a large portable screen I got because we often did presentations and needed a portable projector as well as a screen to project the images onto! I also have a portable speaker that doubles as a PA, but that is more because I needed an outdoor speaker for the pool than it is anything else.

The other screen is mounted in our media room. It is more just a room with a couch, and a TV and projector but it sounds better to call it a media room. It is not one of the fancy press a button, and the ceiling opens, and the screen comes down automatically. It is simply a pull-down screen. I had a pull-down screen in my classroom many years ago when I was teaching school. It just feels right to have one in my house now.

What I have found over the years is that you have to be very careful with where you put your screen. Distance and viewing angle becomes critical with a screen. A projector tends to have less overall projection power than a television does. The other thing I recommend has a professional install your screen. I had one I did myself in Indiana, and it fell off the wall twice before I realized you have to mount them a specific way.

That is why I purchased the portable screen years ago. Frankly, it can be used anywhere and never really causes issues. If it is too far from the projector, you just move it. Want to watch the really big screen in your backyard, the portable screen works.