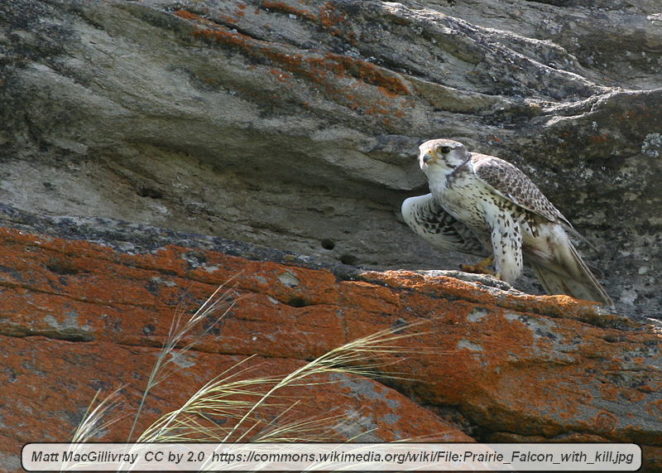 Many people are fascinated by birds of prey. Yet, most have only seen a few kinds of these birds and even fewer can identify them in the wild. One of these beautiful and majestic birds is the Prairie Falcon (Falco mexicanus).

The prairie falcon is a medium to small bird of prey that looks and hunts somewhat like peregrine falcons, though they are distinctly different species.

The adults are usually less than 17 inches in length, from tail-tip to beak. The males are smaller than the females and are usually about two inches less in length.

For the size of the bird, the wingspan is impressive, though, at over 40 inches.

The bird is pale brown on the back and wing tops. The bottoms of the wings are off-white and the breasts and bellies are off-white with brown bars. Young birds have heavier barring.

A deep brown stripe runs both above and below the eye, with the lower stripe more pronounced than the upper one. The eyes are also deep, rich brown and the end of the beak is black to dark brownish.

Coloration is one way to tell these birds apart from peregrine falcons because peregrines are darker and they have a dark wedge shape on the sides of their faces. Prairie falcons are lighter and lack the wedge. Additionally, no other falcon in North America has dark patches at the underside base of the wing, located where humans have armpits.

These birds have a fairly large range; from Mexico to Canada and from the Dakotas to the Pacific coast. They are locally populous in Utah, Wyoming, New Mexico, Texas, Montana, Washington, and Oregon, though they are also found in South Dakota, North Dakota, Idaho, Colorado, Nevada, and Arizona.

They live primarily in grasslands and prairies, hence the name. Most of the nesting is done between 4,000 and 6,000 feet, with the nests most often being made on the faces of cliffs. The nests almost always overlook grassy or prairie land.

The nests are usually made out of tree limbs that have been carried up to shallow ledges in the rockface. These birds breed in mid-spring and normally lay 3 to 5 eggs. It takes about a month for the eggs to hatch and according to the US Forest Service, the young fledge in 40 days. It is rare for a prairie falcon to breed until they are two years old or older.

Prairie falcons aren’t picky predators and will eat almost anything they can catch. According to Montana Department of Natural Resources and Conservation (Montana DNRC), the majority of the diet of those prairie falcons that have been studied consisted of larks, meadowlarks, squirrels, hares, rabbits, and large insects.

Interestingly, the only predator that preys upon prairie falcons consistently is the great horned owl, which preys on many other birds of prey as well. Even then, few prairie falcons are taken by the owls and the impact of the predation is minimal.

If you live in or pass through the grasslands of the western United States during the summertime, there is an excellent chance that you will see one or more of these handsome birds.