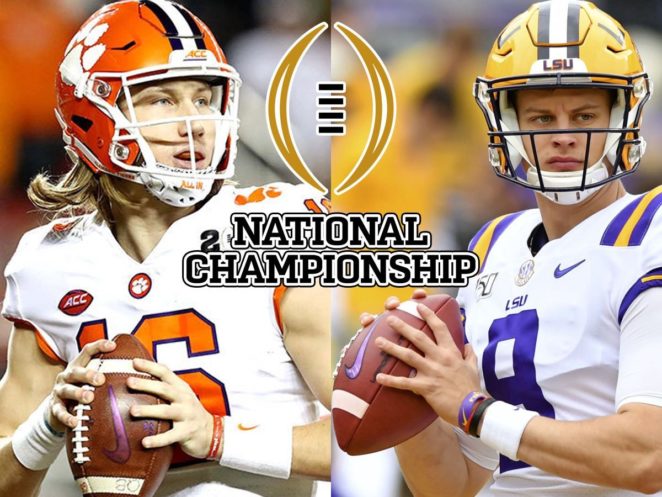 I always anticipate the College Football National Championship because it is hard to pinpoint who will actually make it. As the months go by during the season, I can only imagine who will be the contender against either Clemson Tigers or Alabama Crimson Tide, who have made it in the National Championship the previous five years. Well, it is finally here and we are down to Clemson Tigers vs LSU Tigers. I do believe that, the LSU Tigers have the most momentum going into this game. Seemingly, it is almost set-up like the passing of the torch from Clemson-to-LSU from my observation of the previous years. Clemson will have their hands full not just on offense, but defense as well against an LSU team that has had an amazing season. Trevor Lawrence, Clemson’s quarterback was the difference maker in their win over the Ohio State Buckeyes, but LSU brings a different level of energy, plus they have the turf advantage being that the game is located in New Orleans Louisiana at the Mercedes-Benz Superdome.

In order for Clemson to seal the deal and walk away with their fourth National Championship, their defense needs to be flawless against Joe Burrow, LSU’s quarterback; and they need to continue utilizing the pass-rush as Trevor did against Ohio State. This will be an explosive game and I believe it will mirror Clemson’s showdown against Ohio State. A good blueprint for LSU to follow would be the blueprint that Ohio State attempted, such as shutting Clemson down early and keeping the momentum.