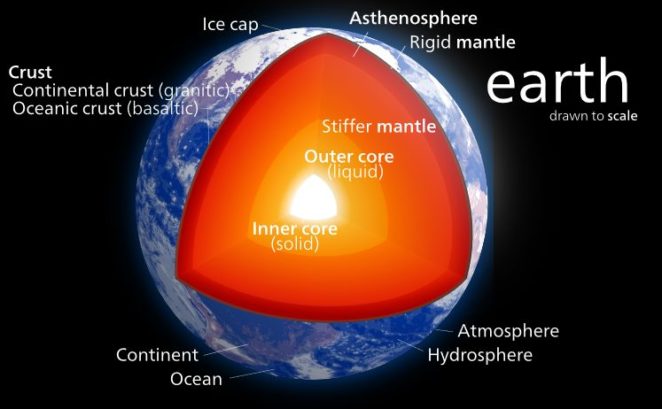 There is plenty of evidence to suggest that the core of Planet Earth consists mostly of iron (around 80%) with the rest probably being nickel, although there is some doubt about this. It is also thought that there is an inner core that is solid, surrounded by a liquid outer core. The vast amounts of iron at the centre of the Earth, and the convection currents in the outer core, cause the planet to have a magnetic field. This is profoundly important for life on Earth, because the magnetic field helps to shield the surface from harmful solar radiation. It also accounts for why compasses point to the Magnetic North Pole.

There is also evidence that points to the fact that compasses – had there been around at the time – would have pointed to the Magnetic South Pole in past times. Samples of rock from extinct volcanoes show clearly that there have been periods in Earth’s history when the magnetic polarity has been the opposite of what it is now, and that there appear to have been many such switches in the past.

The last full switch in polarity occurred around 780,000 years ago, but there was a partial switch a mere 41,000 years ago. This was not a long-lasting arrangement, with the polarity returning to its previous state after only a few hundred years.

These switches do not seem to happen with any regularity, and it is impossible to predict when the next one will occur.

But why should such switches happen at all? One theory – which cannot be confirmed given our current knowledge – was proposed in 2012 by Peter Olson and Renaud Deguen who were working at Johns Hopkins University, Baltimore, Maryland, USA. They termed their theory “translational instability”.

The idea is that the iron at Earth’s core is not uniformly distributed but lopsided, with a greater amount having crystallised out on one side than the other during the cooling period after the initial formation of the planet.

When scientists speculate about what might have happened in the distant past, they build models (these days using computers) that can then suggest what the effects might be were their speculation to be correct. In this case, a lopsided iron core would – according to Olsen and Deguen’s model – cause the axis of any magnetic field to shift to the side where there was a greater concentration of iron. In turn, this would cause irregularities in the patterns of convection currents in the outer core, which would cause the polarity to switch from time to time.

Careful monitoring of the position of Magnetic North, and calculation of the speed of change, might be one way of determining when another polarity change is going to occur. Would that make a huge difference to how we live our lives? It would certainly mean that all navigation systems used by ships and planes would have to be revised, and it might also cause temporary chaos to communication systems, but otherwise the period of adjustment should not be too traumatic. It could, however, make life difficult for animals and birds that rely on Earth’s magnetic field for their migrations, but even they should be able to adjust before too long.