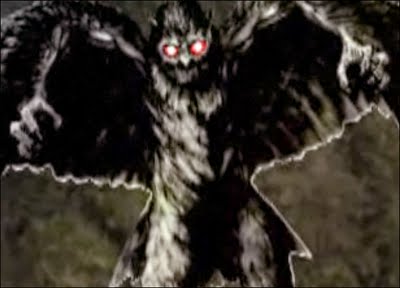 I recently read about a strange and improbable creature who some years ago was terrorizing people in an area in Cornwall, South West England. This phenomenon was called the Owlman, (not to be confused with the Marvel Comics character, who is Batman’s bad alter ego!) This creature was apparently a familiar monster of the Middle Ages, one of the pantheon of weird and dangerous beasts like the griffin, which had the body of a lion and wings of an eagle. The Owlman was supposed to be half-human, half-owl and reputedly haunted old church towers.

However, unlike the other medieval monsters which are now part of folklore and mythology, this one has allegedly been seen by people in this day and age. One of the earliest reports goes back to 1926, when two boys were chased by this owl-like creature. Then in 1976 two young girls on holiday in Cornwall with their family ran screaming to their father, saying that they had seen a gigantic, feathered bird-man hovering over the church-tower. They were so disturbed by the experience that they abandoned their holiday and left for home early. Two months later, in July of that year, the Owlman was also seen by two teenage girls camping in the woods near Mawnan Church, and there was another separate incident when three young French girls reported a terrifying ordeal involving the sighting of this creature to their seaside landlady.

Two years later the Owlman was seen by another young woman, and then eventually he was seen by a man.This frightening and bizarre creature was not just around that year either. In 1995 an American student of marine biology wrote to a newspaper saying that he had witnessed a “vision from hell” near the church in Mawnan, Cornwall, England. He quotes: “It was the size of a man, with pointed ears, a ghastly face,  glowing eyes and a  wide mouth. It had huge clawed wings and was covered in feathers of silver-grey. The thing had long bird legs which terminated in black claws.”How do we explain this bizarre phenomenon?

There are parallels here with the story of the American Mothman, which I imagine most people are familiar with. It appears that the church in Mawnan is built in the middle of a prehistoric earthwork, on a ley line (an ancient line of earth energy which connects certain places). There have been other strange manifestations in this vicinity as well, according to witness reports, e.g. paranormal phenomena. It is clearly a place with a strange kind of energy about it. Maybe I will visit there sometime, it sounds intriguing. And if I encounter the Owlman, well, I just don’t give a hoot. (Couldn’t resist that awful pun there).