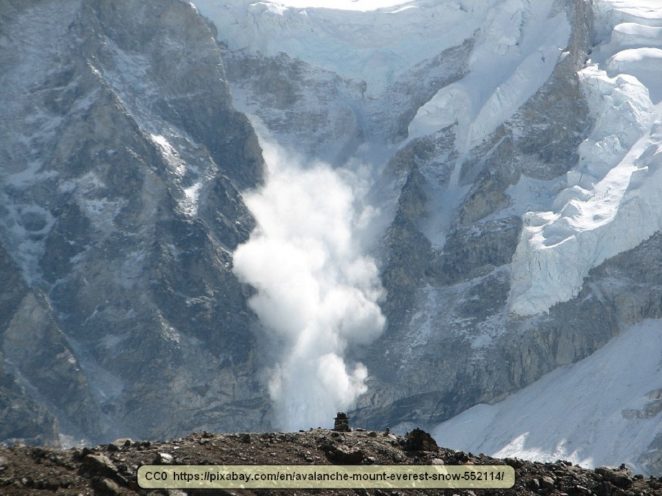 People who live in relatively flat areas or those that usually don’t get more than an inch or two of snow often don’t truly grasp what an avalanche is, what causes it, or what tremendous destructive power an avalanche has. When we understand more about avalanches, we gain a better understanding of these events and the dangers they pose.

What an avalanche is

An avalanche, at its simplest, is when a snow and ice mass slides downhill. That doesn’t sound very ominous or dangerous, but it certainly can be.

The snow can slide over snow and ice, or it can slide over rocks and dirt. In either case, an avalanche usually gathers more snow as it goes. It can also pick up ice, rocks, dirt, and vegetation as it moves downhill. The total weight of the snow, ice, and debris can be enormous.

Destruction due to avalanches

Consider that a cubic foot of ice weighs just over 57 pounds. That is, an amount of ice that measures one foot high by one foot deep by one foot wide. Snow weighs somewhat less since there is air between the particles of snow. The snow in a small avalanche might typically be only 30 yards wide by two feet deep by 20 yards when it initially begins.

At the point it starts to slide, this small avalanche would probably have a weight of in excess of 615,000 pounds. As it moves, it picks up more snow, ice, and other debris, so the total weight increases until the avalanche finally stops.

This isn’t very technical yet because it is easy enough to visualize, but it could get technical in a hurry. Rather than doing so, let’s just say that the amount of force that is exerted can easily snap or uproot a tree that is six or eight feet in diameter. Against such force, buildings, other structures, skiers, snowmobilers, or just about anything else won’t stand for long.

Getting caught in an avalanche

There is another danger to people who get caught in avalanches, besides the potential of being crushed. If a person is buried in snow, with the snow snuggly around them, it becomes virtually impossible to dig out. One reason is that without a frame of reference, “up” and “down” can’t be identified. If a person can dig at all, they could as easily dig downward rather than upward. Also, assuming that they have room for any movement at all, and they normally don’t, they also have a very limited air supply. It is likely that they will suffocate before they can get out.

When a layer of snow becomes weak and no longer adheres to the snow or rock beneath it, it can slide under the force of gravity. This is the same mechanism that results in mudslides and it is quite similar to what a rock slide is.

In the case of snow, this is often because of differences in temperature and moisture content. Snow doesn’t need to be a uniform temperature from the top of a snow bank to the bottom. In fact, it seldom is.

The moisture content of the snow is also important because water acts as a lubricant.

As an example of how this works, let’s say there is a two-foot layer of snow on top of icy snow, on a steep slope. Icy snow can form if snow partly melts and refreezes. This is common on mountain slopes.

In the above situation, the snow on top of the icy snow is warmer than the snow beneath it. If rain begins to fall, slipping down through the upper layer of snow, it can reach the colder layer and allow the upper layer to slide.

This is the mechanism and the result, but it isn’t the trigger that ‘sets off’ the avalanche.

If the conditions are right, it doesn’t take much to start an avalanche. Usually, this is from some sort of vibration. This can be a footstep or even a loud noise.

The vibration allows for the formation of a rift in the snow, letting it break free of the snow that is upslope from it. When the rift forms, the lubrication allows the snow to start slipping downslope.

For people who’ve been trained, it isn’t hard to detect when there is a potential avalanche threat. If the accumulating snow can be made to slide before it becomes so thick that it will cause major damage, a major avalanche can be avoided.

This is good news, especially in areas prone to major avalanches. The first step is in identifying the potential avalanche. This is a little easier because avalanches often happen over and over in the same places, year after year.

Once the place is located and the snow buildup is identified, one of two methods is usually used to get the snow to slip before it can cause major damage.

The first way is to do it manually. This normally involves putting people above the avalanche on skis or similar. They tromp on the snow to cause vibrations, with the hope of setting off a snow slide.

The second way is to shoot percussion explosives over the top of the growing snow problem. If the explosives go off close to the snow, the vibrations from the blast can dislodge the snow. Using this method; shotguns, mortars, and dynamite are all commonly used.

This might seem like a lot of effort, but if the snow can be released before it becomes a problem, it can save a great deal of damage. The problem is that not all areas are set up to do this and there aren’t experts at every location that can identify the threat. Additionally, avalanches can occur in places only rarely, so they can be unexpected.

Quite a few avalanches occur every year. Not many are reported unless they cause major damage or human deaths. Yet, when there is an avalanche report, most people probably don’t truly appreciate the sort of damage that can be caused or the danger that is involved. Hopefully, this article will change this a little.