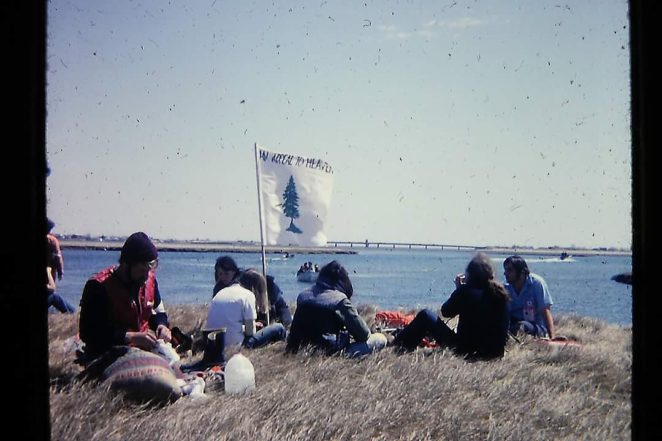 In the Spring of 1977 the Clamshell Alliance was actively organizing hundreds of people across New England to engage in a nonviolent occupation of the Seabrook Nuclear Power Plant construction site.Despite its record for peaceful protests N.H. Governor Meldrim Thompson insisted that Clamshell was a terrorist organization with links to Aldo Moro & the Red Brigades.

Clamshell had actually been founded by environmentalists on the New Hampshire seacoast, Quakers,aging hippies, college kids, & housewives. It was about as far from a terrorist group as you could get.in preparation for the Seabrook occupation demonstrators were  required to attend nonviolence training conducted by American Friends Service Committee activists, & to join affinity groups that would provide collective support on site. I was part of the North Shore Alternative Energy Coalition, Cape Ann’s affinity group. Two dozen of us met in Rockport a few days before the occupation on a sunny Sunday afternoon to learn about Gandhian nonviolence, The history of nonviolent civil disobedience in the United States, & to prepare for contingencies so that we would be able to calmli & nonviolently respond to potential prevocation. We also engaged in  role plays so that every demonstrator could practice how to participate in the action & also develop empathy by taking on the role of police & role playing arrest procedures. This was very valuable &  contributed to the success of our peaceful action the following week, where nearly 2000 people showed up and 1414 were arrested.