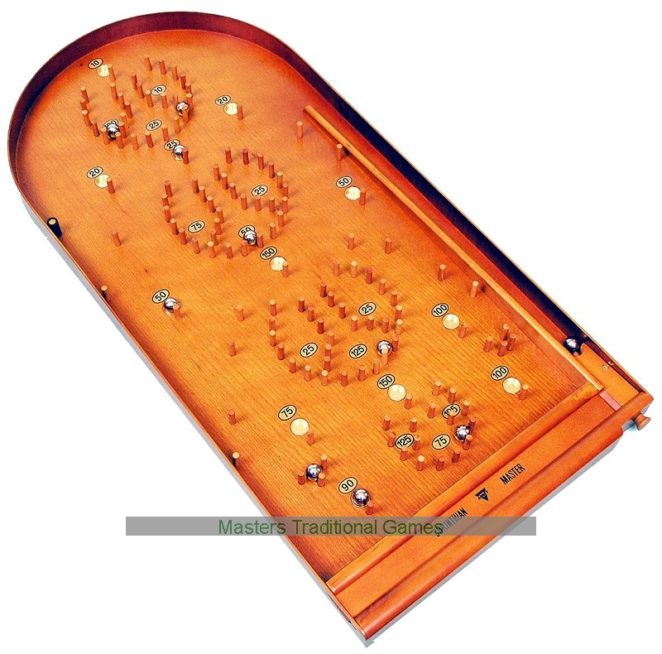 Last time I was at my in-laws’house, I helped out my mother- in- law in cleaning her store-room (attic) and we discovered some toys and games that my husband used to play with during his childhood, some 30-35 years ago.

It was so much fun to see the “old-fashioned” board games. My children at first made fun of all the things but to their surprise, when they tried the stuff, they were fully absorbed and really enjoyed them a lot.

One such “treasure” was a type of bagatelle game. It is an oblong piece of wood with grooves and scores marked between 5 and 125. The board is laid flat on a table and a lever is pulled which ejects the steel balls from their “home”.

The balls would roll around the board and then settle in grooves depending upon how hard you have tugged at the lever. There are penalty grooves like “loose all points” or those with negative marks like -25 . After all the five balls have been used, scores are added up and the player with highest score wins.

We spent hours playing that game and the fun thing was even 6-8 people could play together because each one could have a turn after 5 balls were put in and it never became long drawn and boring.

It was also nice to see my children having some fun with their grandparents because they could easily play the game too. One wonderful thing about these games is that they are classics and are never out of fashion.

You need not re-new batteries or upgrade them or buy endless accessories that toys nowadays demand. I think toys made decades ago were more durable and of better quality than those that are currently being produced and sold in markets.

I wonder if these boards are still around? I have never seen them in any toy shop nowadays. Have you ever discovered any old games in your attic?