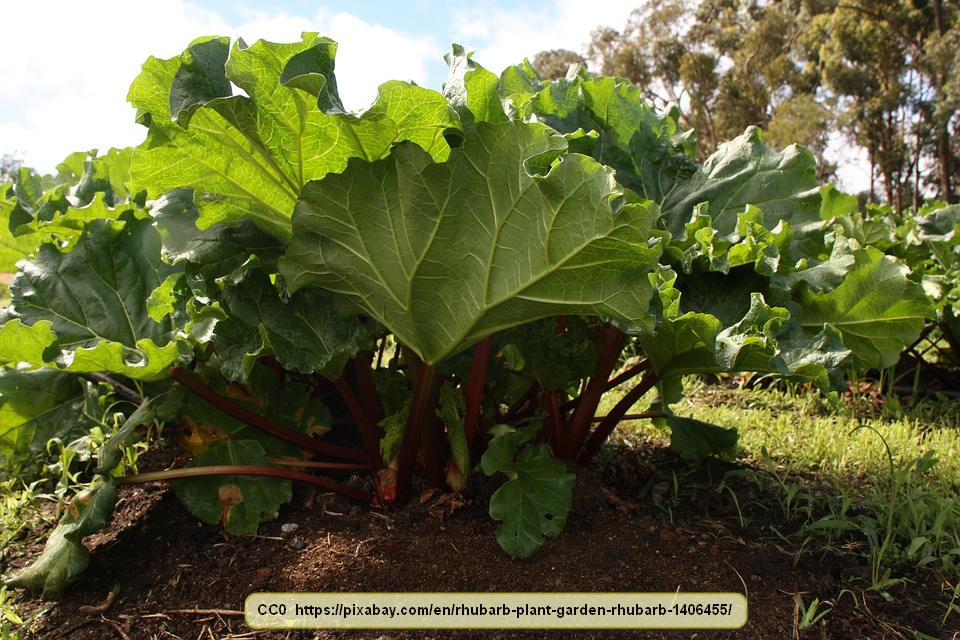 The delightfully sour flavor of fresh rhubarb is a wonderful and delicious complement for sweet fruits. Rhubarb is sometimes known as the pie plant for that reason. Rhubarb-strawberry pie and rhubarb-peach pie are long-time favorites. As it happens, rhubarb is also not difficult to grow. 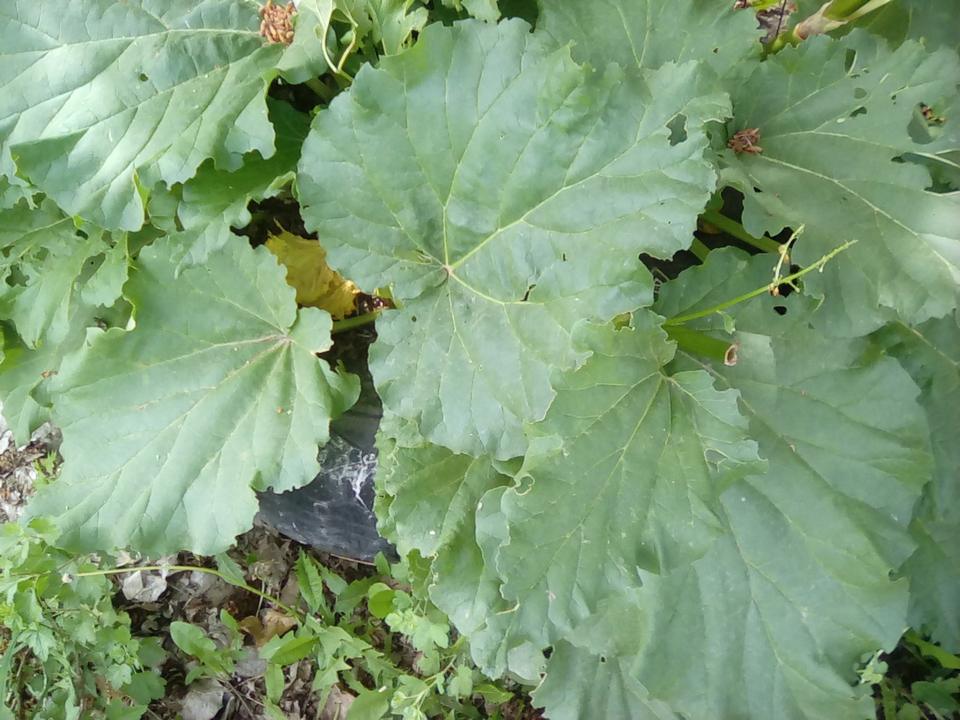 For those who aren’t acquainted with this plant, it grows long, thick leaf stalks from a stout root, each of the stalks holding a very large leaf at the top.

The leaves are not eaten, though they look edible. They actually contain very large amounts of oxalic acid, making the leaves poisonous. Each year, a few people poison themselves by eating the leaves.

It is the stalks that are edible and delicious, though they still contain some oxalic acid. The oxalic acid is what gives the leaf stalks their tasty sour flavor.

Although rhubarb is often sold in the fruit section of stores and is often used with sweet fruits, it is actually a vegetable.

Where to plant rhubarb 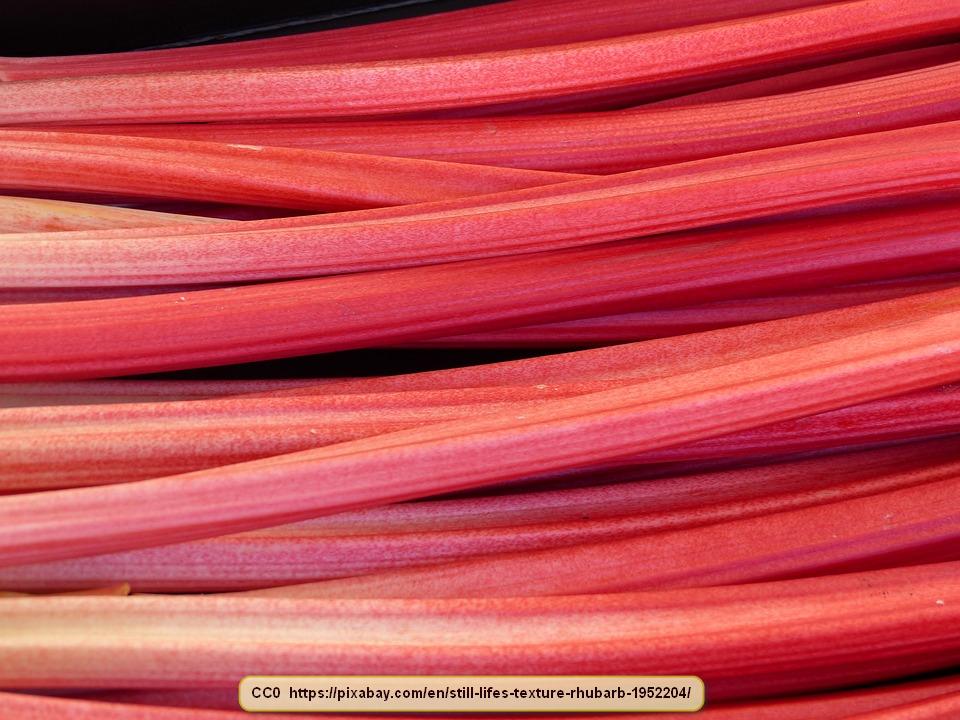 Rhubarb is a sun-loving plant, so it should be planted in full sunlight or mostly sunlight. In the southern US and areas that get intense and hot afternoons, it can benefit from some shade. This is especially true of areas that are dry since the large leaves transpire a great deal of moisture.

The leaves can actually lose more water than the roots are able to draw in, causing the leaves to droop. This is usually temporary, but partial shade in the afternoon can help.

Despite the large leaves, rhubarb isn’t a heavy feeder and it doesn’t need to be fertilized. However, when rhubarb is first planted, the plants do well in soil to which finished compost has been added.

The addition of finished compost also helps the soil retain water at the root level. Rhubarb will usually struggle and may die if it doesn’t get enough water.

The soil should also be worked to a depth of a foot or two, to allow the root plenty of room for expansion. Healthy roots produce healthy and strong leaf stalks.

If more than one plant is going to be put in, allow at least three or four feet between plants. Once fully established, a rhubarb plant can get quite large.

Rhubarb can be started from seeds. However, this can add a substantial amount of time before the first harvest. Because of this, most people plant rhubarb roots or nursery seedlings, rather tha starting it by seed.

The roots should be planted so the crown is one or two inches below the surface of the soil and it should immediately be watered well.

Because of the large surface area of the leaves and high transpiration rate, rhubarb needs a lot of water. The roots shouldn’t sit in water, which can lead to root rot, but they may require two to three inches of water per week during the hotter months.

Established plants that are over two years old tend to be drought hardy, however, if they aren’t getting enough water, the plant will often die back and stop producing leaf stalks and leaves. Once they start getting water again, the plants should perk up, though.

Whenever possible, water rhubarb at ground level rather than by using a sprinkler. Water droplets on the leaves intensify the rays of the sun and can cause sunburn on the leaves.

Each rhubarb plant will probably put up one or more flower stalks each year. If you want to prolong the harvest of your rhubarb, the flower stalks should be removed as they form. If you don’t, the majority of the plant’s energy will usually be used to produce the flowers and subsequent seeds rather than leaf stalks and leaves.

Although rhubarb doesn’t require fertilizer, adding a few inches of mulch, such as dried leaves, grass clippings, or straw, can help retain water and keep the roots cool. This is beneficial to the plants.

Also, a few inches of mulch added around the plant prior to winter can help it withstand cold temperatures. Rhubarb is extremely cold hardy, even without mulch. Two of my rhubarb plants are in raised beds made out of old tires. Both withstood temperatures of -40 F and a prolonged time of over a week when the high temperature didn’t get above 0 F.

The raised beds were frozen so solid that they had the consistency of concrete to the depth of over a foot. Both plants put up new leaf stalks in the spring and seemed unbothered by the extreme cold. Mulching still helps the plants and gives them vital nutrients early in the year.

Rhubarb shouldn’t be harvested for two years after planting. This allows the roots to become established.

After that, don’t pull the stalks off the plant. Instead, grasp the stalk near the ground and give it a good twist. It should pop right off. The base of the stalk and the leaf are then discarded by cutting them off.

It isn’t hard to grow rhubarb and it is a plant that can withstand extremely low temperatures and also drought, once it is established. It needs only minimal care, so maintenance is easy. It can help bring out the full flavor in sweet fruits, though, especially when used in pies.