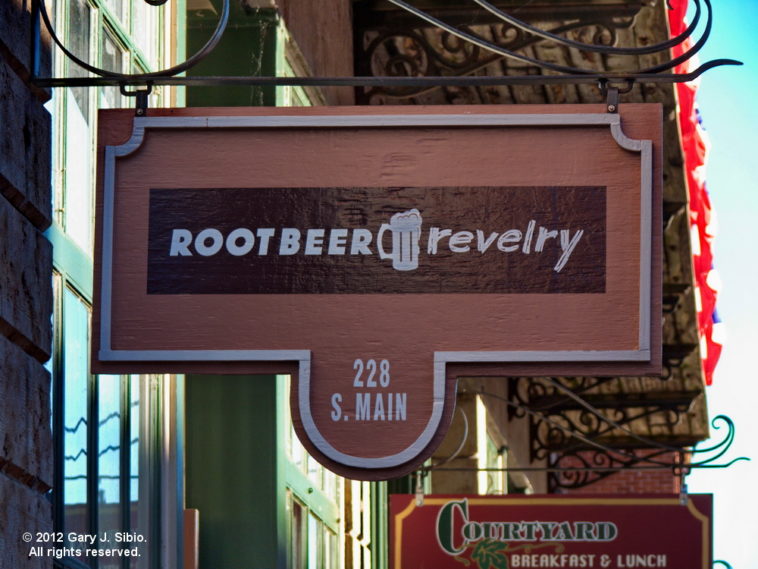 My only real addiction in life is Dr. Pepper. Mr. Pibb Xtra is also a good substitute when there’s no Dr. Pepper available. Beyond that, the different knock-offs are terrible so, if neither of these are available, I go for root beer.

There are a lot of different brands of root beer. If you are good you might be able to name ten. If you are really good, twenty. However, according to Ask.Com there are 2,503 brands in North America alone. Although root beer is most popular in the USA, it is spreading to other countries as well.

Along Main Street in Galena, Illinois is a store named Rootbeer Revelry which offers somewhere over 200 different brands, still less than a tenth of all that are available. Still, it’s more than I’ve seen anywhere else. They also have a soda fountain where you can get a great root beer float made with any of the brands they carry. Besides what they have for sale, the owner has amassed a large collection of root beer cans and bottles which he has on display in the store. Definitely a must-see.

Root beer varies widely in flavor depending on the brand. The basic flavor of root beer was originally from the sassafras root or bark but today artificial sassafras flavoring is generally used. Other flavors such as vanilla, cherry, licorice, and a variety of others can be added.

Root beer got its start with the farmers of the 18th century. The root beer they brewed, often known as small beer, was mildly alcoholic and was served up at family get-togethers and other social events. By the 19th century pharmacists were selling root beer as a miracle cure.

Charles Elmer Hires introduced the first commercially available root beer in 1876 at the Philadelphia Centennial Exhibition. Hires “discovered” root beer on his honeymoon. He had taken his new bride to an inn in New Jersey – he really was a romantic – where they were introduced to the drink by the innkeeper and his wife. Hires did make one very vital change to the concoction. The innkeeper’s brew had a strong laxative effect which Hires was, fortunately, able to eliminate (pardon the pun). Hires’ drink was composed of twenty-five different herbs, berries and roots in carbonated water and, in 1893 he started bottling it.

Hires was a tea-totaling Quaker and originally wanted to name the product root tea. A Baptist minister by the name of Russell Conwell, who later became the first president of Temple University, pointed out that no one would buy something with that name. Since Hires also wanted to market his drink to the local coal miners, pragmatism ruled the day and he named his drink root beer.

In 1895 the Women’s Christian Temperance Union discovered root beer and not in a good way. Lacking any staff chemists they figured that (1) it was brewed and (2) it had beer in the name, therefore it was demon alcohol. Hires Root beer was now sold across the entire country and the WCTU called for a ban on the product. Even though they were completely wrong about its alcoholic content, their considerable influence caused sales to tank.

Feeling the pinch in his sales figures, in 1898 Hires hired an independent lab which showed that his dring had the same alcoholic content as half a loaf of bread. Hires workd the alcohol-free angle into his product and sales rose above the pre-boycott level.

Things changed dramatically for root beer when, in 1960, it was discovered that sassafras was carcinogenic. The natural flavoring was replaced with artificial. It is, however, still possible to find root beer made from sassafras.

Picking up on his success, other brands began to appear. In 1919 Roy Allen started bottling A&W Root Beer, now the best-selling brand. As of the spring of 2015, with consumption down, it was reported that in a seven day period 18.28 million people had consumed a can or bottle of A&W Root Beer.

And, in a return to its roots (pardon the pun, again), it is now possible to go to the store and buy hard root beer with a 5.8% alcohol content.