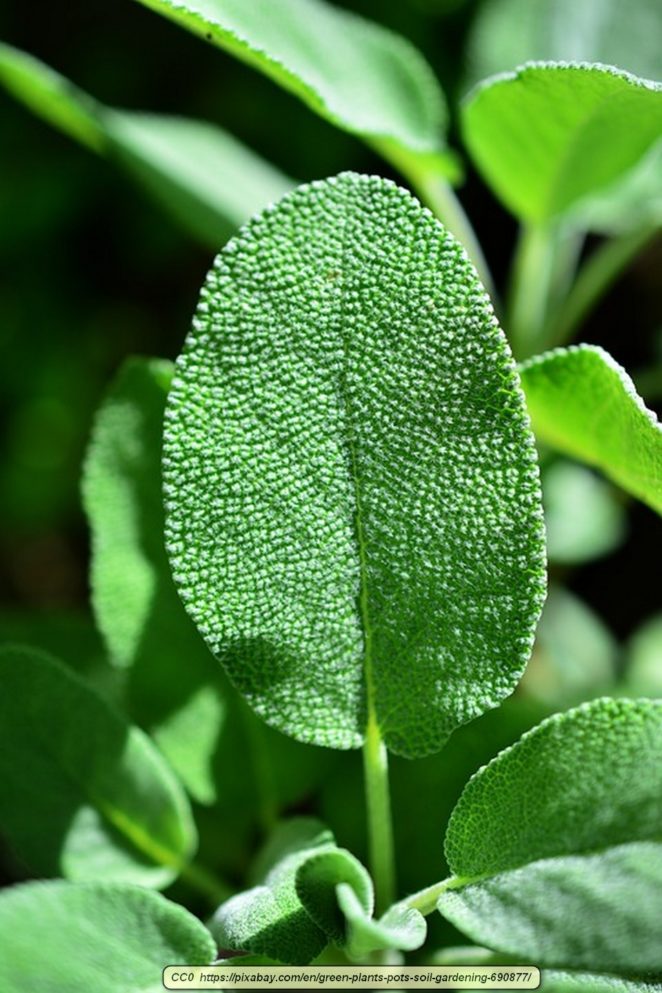 There are advantages and disadvantages to growing herbs like sage in pots. The disadvantages are that the plants usually aren’t allowed to get as large and they need to be watched more carefully since the soil in pots can dry out faster. The advantages are that it is easier to water them, harvest them, control the amount of sunlight they get and they are easier to get to when you want fresh herbs. They are also a solution when you don’t have outside room to plant them. Herbs can even be grown in apartments. A big plus is that they can be grown all year long.

Sage has a moderate root system, meaning that the roots are intermediate between being deep and shallow. When grown in a pot, the plant should have room for the roots to expand, but unlike plants like tomatoes, the pot doesn’t need to be very large.

A pot that is six inches in diameter and six inches deep works well with sage. It should be noted that sage is a hardy perennial, so it does well in larger pots, particularly after the first year. The leaves will tend to be larger when the plant has more room. However, since sage is a member of the mint family, it will grow in a six by six-inch pot, with reasonable care. The pot in the picture is from Bonnie’s Plants and it is a six by six-inch pot.

The pot should also have drainage holes in the bottom. Potted sage shouldn’t be allowed to sit in water for long periods of time, because the roots can drown and rot, killing the plant.

Soil for Sage and planting

Sage doesn’t require rich soil. In fact, if the soil is too rich, the plant may become leggy and weak, with more stems than leaves. Some sources (including Bonnie’s Plants) recommend not using garden dirt for growing potted herbs, however, I have never had problems with growing herbs in garden soil as long as it isn’t too rich. Perhaps this is because I tend to put a lot of finished compost in my garden, I don’t know. Potting soil can be used, but it shouldn’t be rich, either.

Start by putting about an inch of small gravel or stones in the bottom of the pot to facilitate drainage. The rocks should be just a little larger than the drainage holes.

If you are starting with a seedling in a two by two-inch pot (recommended), put about two inches of soil on top of the gravel in the bottom of the pot, pressed down gently. Remove the seedling from the starter pot and place the root ball on the soil in the pot, then fill in the pot with soil, all the way around the plant. The dirt should be up to the level of the plant that it was in the starter pot. The soil should also be pressed down as you go.

After the sage is planted, water the soil well, allowing the excess water to drain out.

Sage is a sun-loving plant. It will tolerate some shade, but for best results, place the pot in front of a window that gets lots of sunshine. Alternately, it can be grown under a grow light. In the summer, the pot can be taken outside so the sage can get fresh air and lots of sunshine. It can be a decorative plant when it is placed on a patio rail or in a hanging pot.

Too much water is deadly to sage, as already suggested. In a pot, the balance is a little harder to find, however, the best idea is to water the plant well and to let the excess water drain out. Don’t water it again until the soil is fairly dry or the plant is asking for water. Sage is a plant that droops when it wants and needs water. Care must be taken, though, because it can also droop if the air temperature gets high enough that the roots can’t absorb water as fast as the plant is transpiring. This doesn’t mean that it necessarily needs water, so test the dirt with a fingertip to make sure that it is indeed dry. Do remember, however, that soil in a pot usually dries out much faster than soil in the garden.

Sage can become very dense with leaves. It is advisable to trim out leaves and/or stems to allow for airflow. If you don’t and live in an area that has high humidity, mildew can become a major problem and can kill the plant. In fact, mildew is one of the very few problems sage has.

Stems that are trimmed can be put in glasses of water to root for more sage plants if they aren’t chopped up and used for dinner or medicinal purposes. The excess stems and leaves can also be air dried easily.

The three biggest problems that sage has and the biggest causes of crop failure is over-watering, over-fertilizing, and mildew. There are few pests or diseases that affect this hardy plant.

Sage is a wonderful plant to grow in pots and it isn’t hard to do. There aren’t many herbs that are easier to grow, either, except for perhaps oregano. Having some in a pot makes it easy to use it for seasoning pork, chicken, turkey, sausage, vegetables, venison, and elk. Sausage made with fresh sage is far better tasting than sausage that’s made with dried sage, too. This is also a good smelling aromatic herb that gives a good scent as it grows.