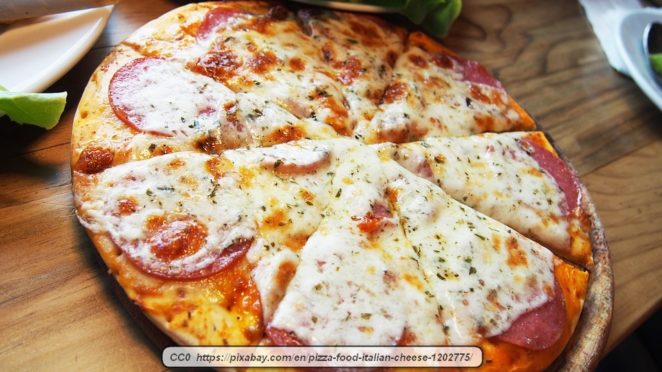 Some time ago, I managed a popular pizza parlor. One of the biggest reasons it was so well liked by so many people was because almost everything was made fresh, daily. That included the pizza shells and the sauce. That is a ‘not-so-secret’ of most of the very best pizza parlors everywhere.

The reasoning is quite simple. No matter what toppings you put on your pizza, the pizza will never be better than the dough and pizza sauce it is made with. This is also why store-bought, pre-packaged pizzas never come close to the flavor of a pizza parlor pizza.

The following recipe uses fresh garden ingredients, though they can be purchased at the store if you don’t have a garden. This makes a lot of sauce, so there is enough to home-can. Since the ingredients are fresh, the canned result also tastes much fresher than what is sold in stores and it is healthier, too.

You can also make a correspondingly smaller amount of the sauce if you only want enough for a couple of large pizzas. Incidentally, this sauce is also excellent as a base for spaghetti sauce and I’ve used it in chili sauce.

Although not absolutely necessary, I usually skin the tomatoes. This is very easy to do. Simply get a pot of water boiling and put a couple of tomatoes at a time into the boiling water. Let them boil for about a minute, then put them into ice water for a minute or so. The skins should slip right off.

* The more of the ingredients that are fresh, the better.

1. In a deep frying pan, cook the onions and garlic in the olive oil over medium until the onions are getting translucent and soft. This takes about five minutes.

2. Add the tomatoes, chopped, then add the brown sugar and lemon juice. Stir well, then reduce the heat to a simmer.

3. Cook, uncovered, stirring frequently until the tomato sauce is thickened. This takes about an hour or so.

4. Add the herbs, stir well, and allow the sauce to cook for an additional minute or two.

Note: Heat destroys the volatile oils that give herbs their aroma and flavor, so they should be added near the end of the cooking time. This way, the sauce retains the most flavor possible. Basil is especially heat sensitive. This is, in fact, a secret to fantastic sauces.

To home can the sauce:

2. Wipe the rim of the jars with a clean, damp cloth.

3. Put the lids on the jars and put on the rings, tightening only hand tight. If you tighten them too much, you’ll have difficulty getting them off later.

4. Put the jars in a boiling water bath so the water is about an inch above the tops of the jars. Allow them to process in the boiling water for 15 minutes, then remove and place the jars on a towel on a counter, to cool.

5. The jars should ‘pop’ when they seal. When they are cooled to room temperature, press down on the center of each lid. If it has properly sealed, it shouldn’t give. If it does, refrigerate the unsealed sauce and use it within a day or so.

Tip: It is a good idea to loosen or remove the rings after the sauce has cooled and the jars have been checked for a seal. If the rings are left on the jars and are tight, they can become progressively difficult to remove after they’ve been stored for a while.

A half-pint of this sauce should be plenty for a large pizza. We usually make pizzas two at a time, so most of the sauce we make and can are put into pint jars.